Since my marathon recap post was kind of long, I decided to separate out the actual weekend part of marathon weekend.  We decided to stay in Carmel because of the locations of the bus pickups to take us to the marathon start.  Right in the heart of downtown Carmel was one of the pickup spots.  Luckily there are a ton of small hotels, inns, and B&Bs in Carmel.  Rather than leaving the dog in a boarding place in Sac, I found a place that allows pets (Carmel is historically and well-known as an extremely dog friendly place).

We made a pit stop in Fairfield to get some lunch on our way down on Friday.  The wife found a sandwich spot called Joe’s Buffet .  They made a tasty sandwich – I had a combo of pastrami and corned beef.

Once we reached Monterey and stopped to do my packet pickup, we swung by PeterB’s brewpub (right behind the expo area at Portola Hotel).  I had the Belly Up Blonde since I wanted to keep it light.

Prior to our trip, I had done some research on dog-friendly restaurants in Carmel.  A ton of places have outdoor sitting and allow dogs in their patio areas since so many people have dogs (either visiting or living there).  The Inn that we stayed at also provided us with a list of some of the nearby dog friendly restaurants.  Our living quarters for the weekend was the Svendsgaard’s Inn.  This place ended up being only about 4-5 blocks from the bus pickup.  The accomodations were nice and it was a small quaint little place.  They had a small grassy area in a courtyard with poop bags available.

That first night in Carmel (I still don’t understand how the official city name is Carmel-By-The-Sea…such a mouthful), we walked over to Bistro Beaujolais for dinner. 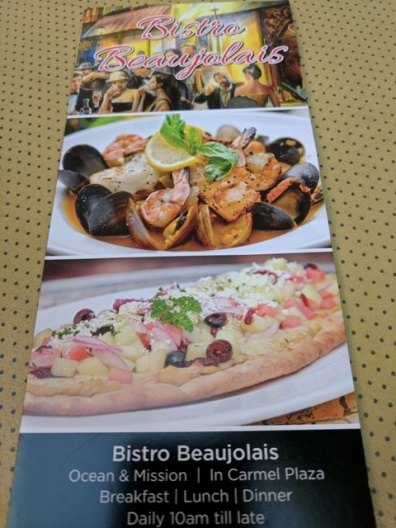 Billed as a French restaurant, we ordered with this in mind.  I had the French Onion soup, escargots, and sand dabs.  My wife had a lemon chicken soup and the Steak Frites.  The last time I was in the Monterey area is when I learned about Sand Dabs.  I guess they’re a local fish that is wildly popular and served at pretty much every restaurant (doesn’t even matter if it is American, European, Mediterranean, etc).  I was surprised and pleased to see that they had a Michigan beer and ordered the Founders Porter. 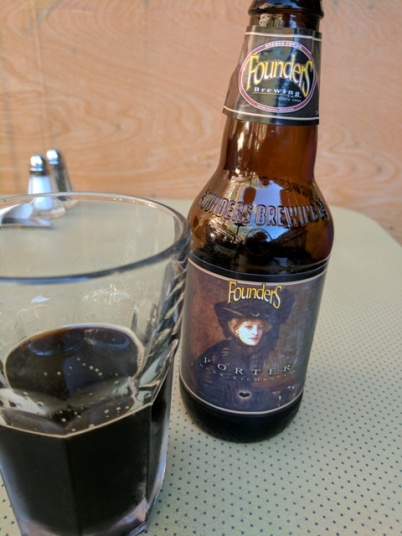 The meal overall was pretty good though the cut of steak my wife received wasn’t the best and had some tough and chewy bits. 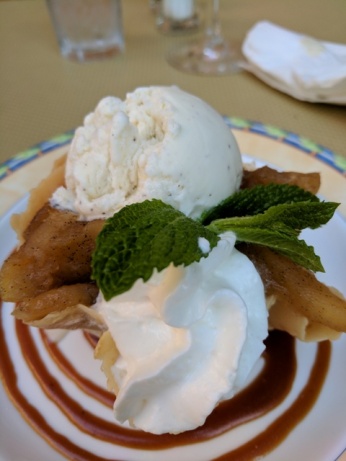 We learned that the dog is actually good if you put her in her carrier while at a meal and so we continued this trend for the rest of our meals in Carmel.

After dinner we planned to walk down to the beach to watch the sunset.  I made a quick stop at some of the temporary bathrooms outside the shopping mall area where our restaurant was located.  I was quite impressed with the temporary accommodations compared to normal port-a-potties. 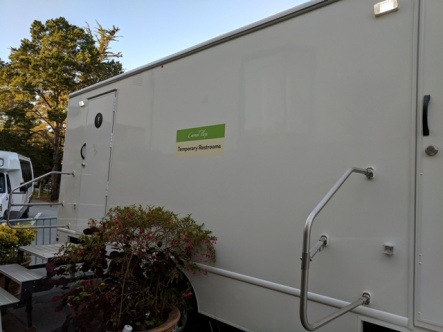 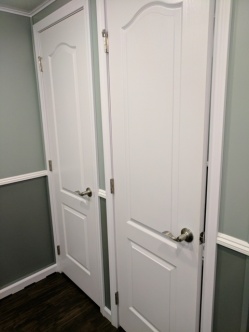 We then made the downhill trek along Ocean Blvd to the Coastal Trail Carmel Beach.  This place is quite popular especially at sunset because you get to watch the sun go into the ocean.  Surrounded by many strangers we stood and watched as the sun slowly set. 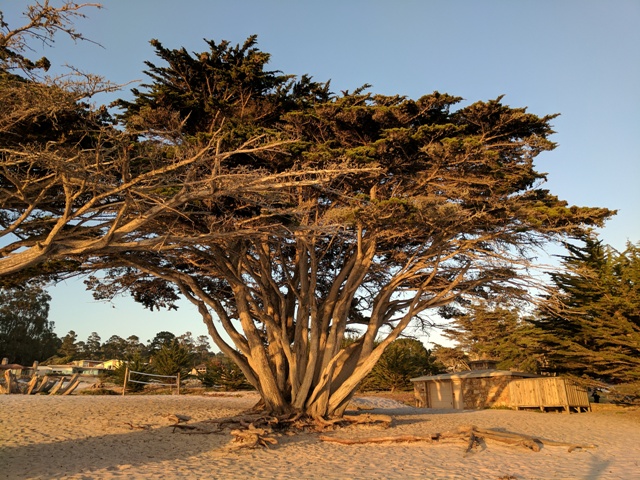 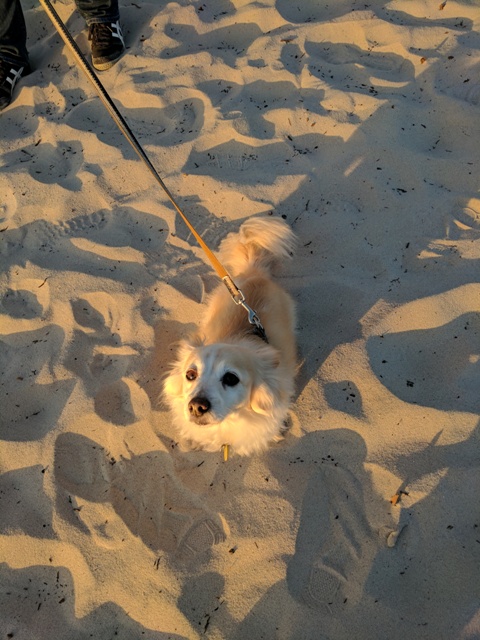 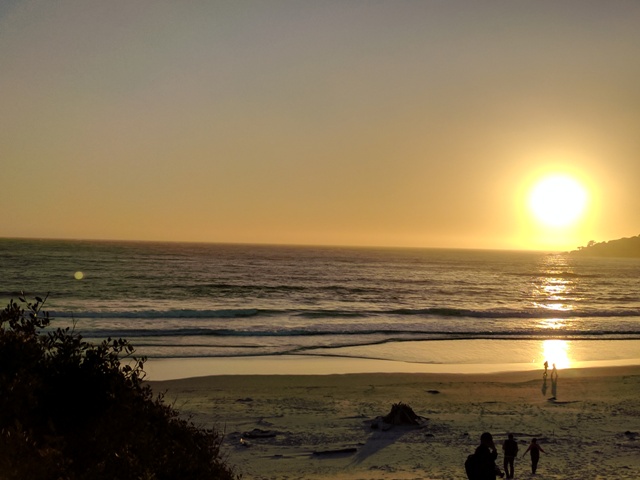 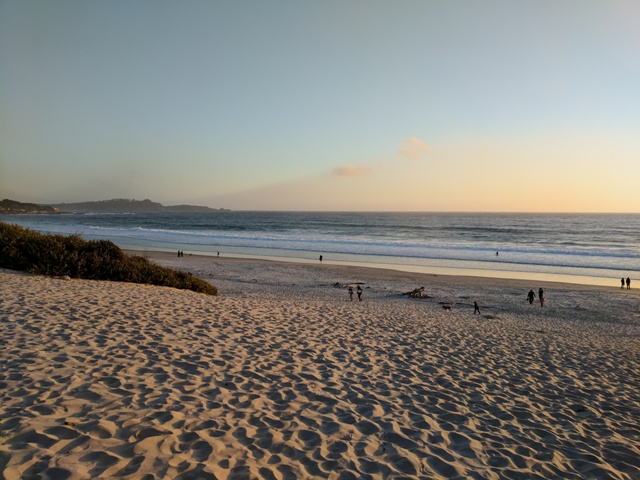 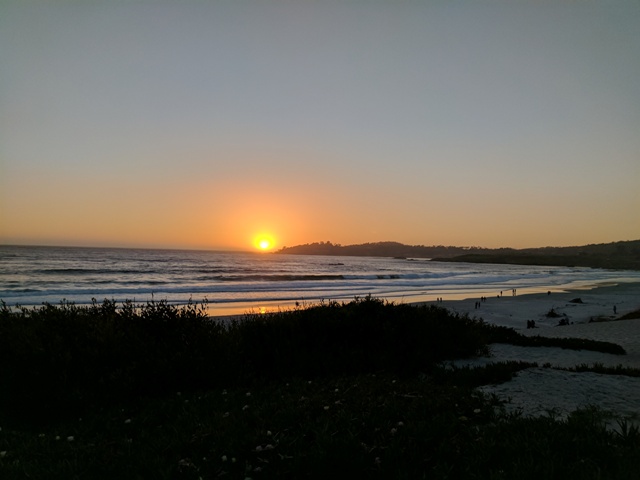 The following morning we made the drive into Big Sur.  I didn’t get any pictures while there.  I will say it is quite a big difference from the Monterey area in that you enter a forest with these magnificent coastal Redwoods that just tower over you.  We stopped at the Big Sur River Inn’s restaurant.  We had to order “to go” and could sit outside their restaurant since we had the dog.  We each had their chicken sandwich which wasn’t too bad. 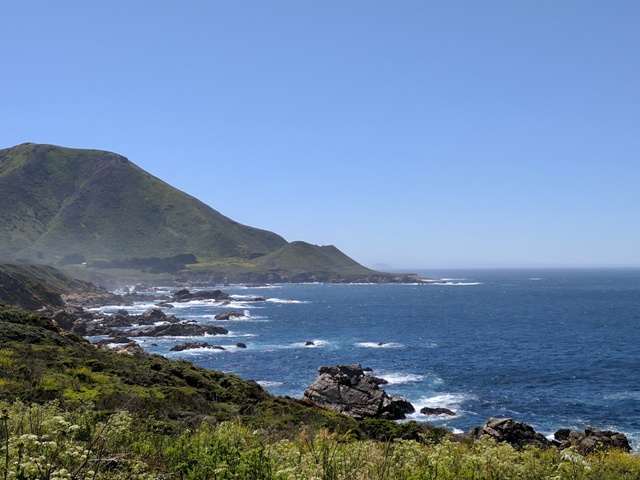 For dinner, I went with my normal pre-race meal of pizza.  I found this pizza joint that was located near the marathon finish (about a 5 minute drive from our Inn) called the Allegro Gourmet Pizzeria.  They were great with the dog and even allowed us to eat inside with the dog.  We kept her in her carrier and she was surprisingly very good and quiet. 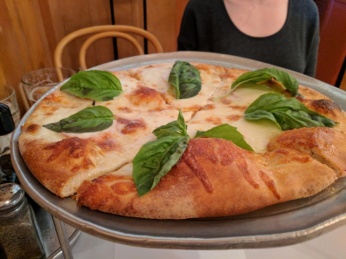 After the marathon, we walked from our Inn just a few blocks to the Hog’s Breath Inn for a late lunch.  I thought I was hungry after running for 5.5 hours but once the food came, I could only eat a small amount.  I had the fried calamari to start and then went with their pulled pork sandwich with a salad.  I also enjoyed a nice light beer as a celebratory drink.  I ended up leaving a good chunk of my salad and kind of de-constructed my sandwich.

I took a nap after lunch and then we headed over to 17-mile drive.  This is a scenic drive that takes you through the ultra-exclusive community of Pebble Beach.  There are actually 3 (maybe more) golf courses within the community.  I had previously driven through on my last visit but my wife hadn’t been through so we made the drive and enjoyed some time on the beach (much less crowded since you have to pay to get into the community/drive) and driving right along the water.

We spent the sunset time at the beach again because why not?  So peaceful and pretty. 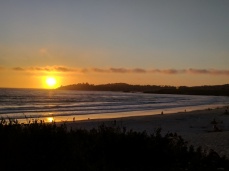 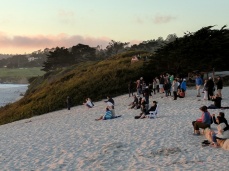 To cap off our time in Carmel, we walked (it was tough for me to make the trek considering how sore my legs were) over to The Forge in the Forest.  We of course were celebrating my finishing the marathon so had some cocktails to begin.  I also had a cup of clam chowder and then went with their steak.  This cut of meat was much better than that from the other restaurant.  It was very tender and cooked just right.  We topped it off with some yummy dessert (can’t remember exactly what it was). 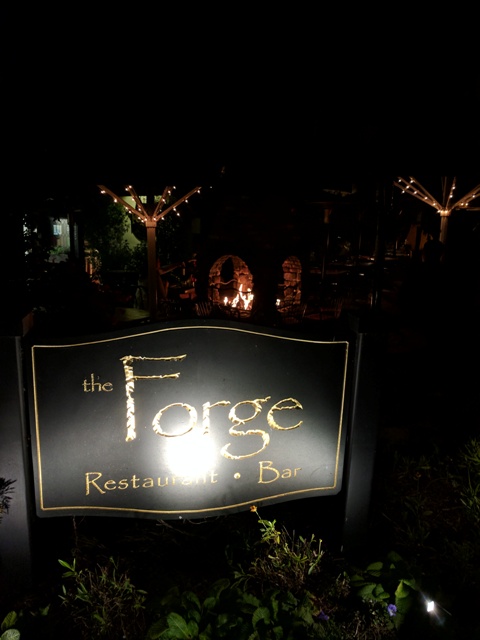 And finally, on our way out of the Monterey area, we stopped at Phil’s Fish Market and Eatery (on recommendations from co-workers) in Moss Landing.  It was definitely worth it.  I had to try their clam chowder and then went with their iconic Cioppino.  It was a LOT of food and I ended up taking a bunch of it home with me.  My wife had their fish tacos but in reality they were huge tortillas that were quite filled and were more like two big burritos.

Overall a very good weekend of eating (along with the marathon).