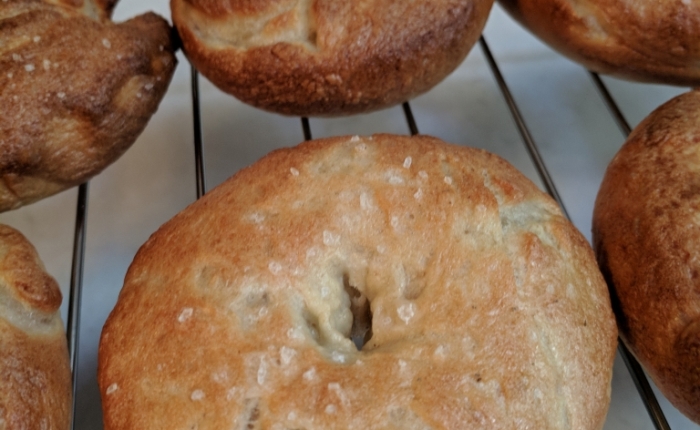 For the 4th of July I decided to try my hand at bagels.  A few years ago the local bagel shop shut down and we haven’t had a good place nearby to get bagels, often settling for some not that great ones from the grocery store.  So I finally said “just do it man.”  After some online research on different recipes and methods, I settled on something that I could accomplish in one morning.  In the end the whole process from start to finish took about 3 hours.

I started by adding the sugar and yeast to 1/2 cup of warm water and letting it sit for 5 minutes untouched.  Then I mixed it up to incorporate it all together.  This formed a collagenous mass (I had never before actually mixed up the yeast after letting it sit in water).

Next I mixed up the flour and salt.  I created a well in the middle and added the yeast/sugar/water mixture and then added the 1 1/4 cup of warm water.  The +/- 1/4 cup of water is dependent on your locale (temperature, humidity, etc).  I ended up adding in an extra 1/4 cup of water but realized this was too wet so incorporated some flour back into it.  This was a relatively dry dough and much easier to knead compared to my bread doughs.  It’s really hard to say exactly how you know if it is too dry or wet but I’ve been working for dough long enough (really it’s not even that long) that I had a sense of how moist/tacky I needed the dough.

I then proceeded to knead the dough mixture for 10 minutes.  In a lightly oiled (I used olive oil) bowl, I coated the dough ball and covered the bowl with a towel.

The dough was proofed in my oven (proof setting) for 1 hour. 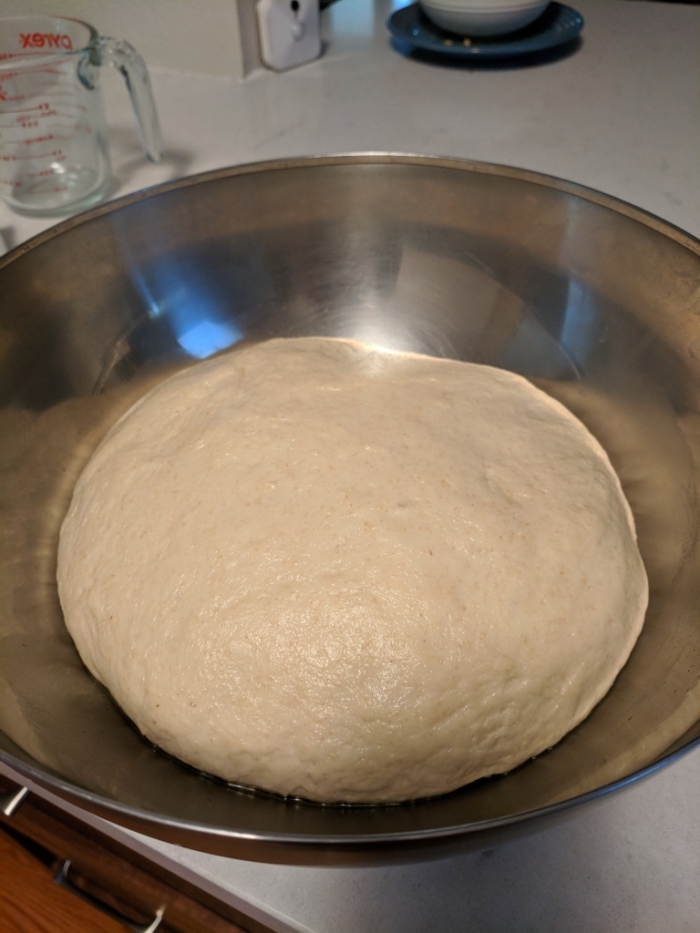 The dough had actually proofed more than twice its original size, I punched it down and covered with a towel and let sit for an additional 10 minutes.

END_OF_DOCUMENT_TOKEN_TO_BE_REPLACED

This post is mostly for me to remember what I did to my bike.

I had noticed that the bike chain was rubbing on the front derailleur when I was in certain gears.  I know this is not supposed to happen and after reading up on it I know that it can affect the life of the chain.  The front derailleur is the area between the pedals that moves the chain if you have different gears in the front.  My bike has 3 gears in the front and 9 gears/cogs in the rear wheel for a total of 27 gears.

I did my due diligence and watched a bunch of videos on YouTube about adjusting your front derailleur as well as reading various DIY bike repair articles on various web sites.  Initially I thought this would be a simple fix.  But I was wrong.  I spent a good part of an afternoon (2-3 hours) futzing with it and only seemed to make things worse.  I ended up giving up that day.  The next day I was determined to try to figure this out and not have to take my bike into the LBS (local bike shop) to have them fix it.  So I basically started from the beginning.

I noticed that the derailleur was actually sitting a little higher than it should.  Everything I read said the bottom of the bracket should be about 2-3 mm from the top of the largest gear.  So I loosened the bracket holding the derailleur to my seat tube and moved the derailleur lower just a little bit.  I also made sure it was parallel to the chain/gears.  I had the chain on the smallest gear in the front and the largest cog in the rear.  Then I adjusted the L screw to make the chain about 1-2 mm from the inside of the derailleur.  I shifted the front chain and it started to rub.  This is where I had the biggest issue.  After further reading, I suspected that the shifter cable tension was the biggest problem.  I loosened the shifter cable from the derailleur and rotated clockwise the barrel adjuster all the way tight (clockwise), pulled the cable tight by the derailleur and tightened it down.  I had the chain in the middle ring on front and middle cog in the back.  I then rotated the barrel adjuster counter-clockwise (which tightens the slack of the cable – this is contradictory to what you would normally think) and watched as the chain moved away from the derailleur and into the center of it so it wouldn’t rub when passing through.  And that was pretty much it.  I didn’t really adjust the H screw, which prevents the chain from jumping off the biggest gear in the front.

Went on a short-ish ride today and gears shifted well and everything seemed good with no rubbing.  So we’ll see how it holds up.  I noticed that there was already some fraying of the shifter cable (which is surprising since I’ve had this bike for 1 year and hadn’t rode it much but maybe just a sign that things made these days don’t last, or the LBS that I bought it from doesn’t use high quality stuff…oh well, when it comes time I’ll figure out how to change the cable as well). 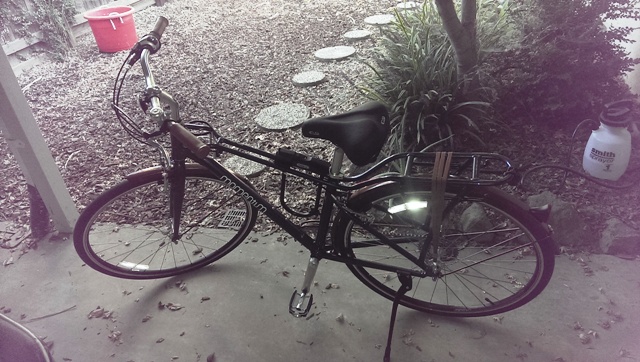 With the Urban Cow Half Marathon 2016 just around this corner this coming Sunday, I had to pick up my packet at the local Fleet Feet (located in downtown Sac).  Since I had the time and thought I’d be good to the environment (and to my health), I decided I’d try riding my (in actuality the wife’s) bike downtown.

She purchased a Momentum iNeed STREET bike a few weeks ago.  One complaint she had was with the saddle (slowly learning the bike lingo) so she ordered one she thought might be more comfortable.  I helped her install it this week.

I currently have a Giant Roam 2 but because it is sized a little bigger, I am not as comfortable taking it into downtown since it is hard to stop and start easily.  So my wife gave me permission to test out her new seat on my trek to the running store.

After she had purchased her bike, it spurred me to look into getting some much needed accessories that I had been putting off since I didn’t do a lot of riding in the last year.  One neat thing about her bike is that it came with a bunch of already attached accessories that are helpful for urban commuting.  There is a U-lock holder attached to the seat tube.  They also designed the top tube as two smaller parallel tubes allowing you to slip your U-lock through it (see pic below)

Bike security is a pretty big thing and business.  I scoured various review and bike web sites looking at the different types of locks available.  In the end I settled on some U-locks for each of our bikes.  The ones that I found came with additional cables (that can be used to help secure your front wheel).  I ended up going with the Kryptonite Series 2 Standard that came with a 4′ cable.  For D, I bought her the Abus Facilo 32 with a Cobra Cable.  I found that for U-locks, Abus is very good as is Kryptonite.  Each of the companies have varying levels of protection, which I find a little funny.  “Get this lock and it’ll mostly keep your bike safe or get this super duper expensive lock and no one will steal it.”  I guess it makes sense because it depends on where you live and will be parking your bike.  Are you in a high theft/crime area? Are you out in the suburbs with not much crime around?  Those sorts of things.  From my understanding here in Sac, bike theft is a huge issue and people will take your bike or components if they’re available.  So I ended up going with medium protection for both our bikes (also because we don’t have super expensive bikes in the thousands of dollars).

I was fairly comfortable riding with cars passing me by and such.  Since I hadn’t had much chance to lock the bike(s) to things, I was a bit nervous and had to think about the proper way to position the bike and lock it up.  The place to lock bikes in front of Fleet Feet was not your typical U shaped bike racks (like here).  This rack was low to the ground which made it tough to get the frame and bake wheel within the U-lock, but I made it work.  I had also watched videos and read up on the proper way to lock your bike to try to prevent theft.  I looked at the other various bikes parked on the street in front of store next to Fleet Feet and realized so many people just willy nilly lock their bikes.  After picking up my race bib and free bag (will post pic later), I biked over to a local sandwich place that makes some awesome sandwiches.  They also have a bunch of various snack items and beer/drinks for sale as well.

In the end I rode a total of about 10 miles (this after a 4 mile run  this morning).  The new seat (saddle) overall I would say is fairly comfortable though I did get some soreness on the big part of my rump towards the end of the ride.  The built in “shocks” of the new seat also make sounds when I went over some bumps.  Overall I’d give the Cloud-9 Comfort Ladies’ Saddle a passing grade.  We’ll see how it works out for D as it gets worn in.

On an unrelated note, hopefully my pictures will start to be better as I am due for a phone upgrade soon.  I have had the HTC One (m7) for the last 2 years and while the phone is good, the camera sucks.  There is a known defect in the camera that turns any shot that is not in nice bright sun into this hazy purple mess (hence the pictures you see on the site).  So now I’m trying to decide between the following: Iphone 7, Iphone 6s, Galaxy S7, or the yet to be released Google Pixel phone.  I know all these phones have good specs and are probably really good so it makes the decision much harder.  We shall see.