I woke up on Day 5 and was a bit sick (related to the previous night’s visit to the New York Bar).  The sad part is that we had ordered the Girandole Japanese breakfast.  Girandole is one of the restaurants in the building and the Japanese breakfast is supposed to be one of those “must haves” while in Tokyo.  Unfortunately due to how I was feeling, I only had a small portion of it but it looked amazing. 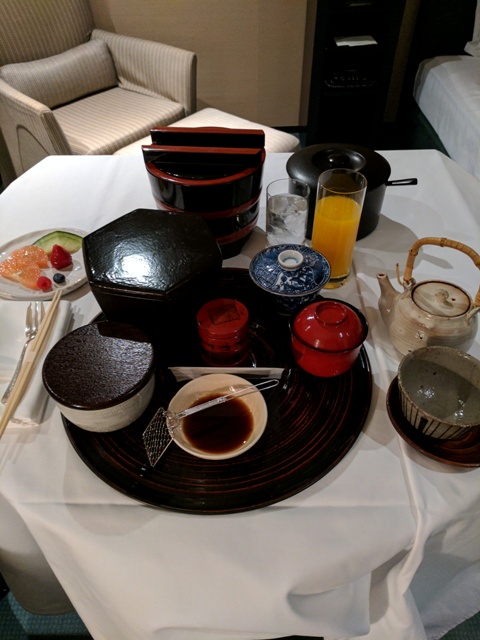 It was our last full day in Tokyo so I tried to get my sh*t together and we headed out before noon.  I wanted to see Tsukiji Fish Market and possibly get some fresh fish while there.  Since we were arriving so late, I knew we probably wouldn’t see as much as if we went super early like most people.  I learned that if you want to see the actual tuna auctions, you have to sign up because it was becoming too popular, that start super early like 4 am.  Next to the marker were some tourist-filled small alleyways that were lined with restaurants and other shops.  We ducked into a small sushi joint to get some lunch.  I will say that the fish was definitely fresh and overall good.  And for dessert, my wife had some taro ice cream.  yum! 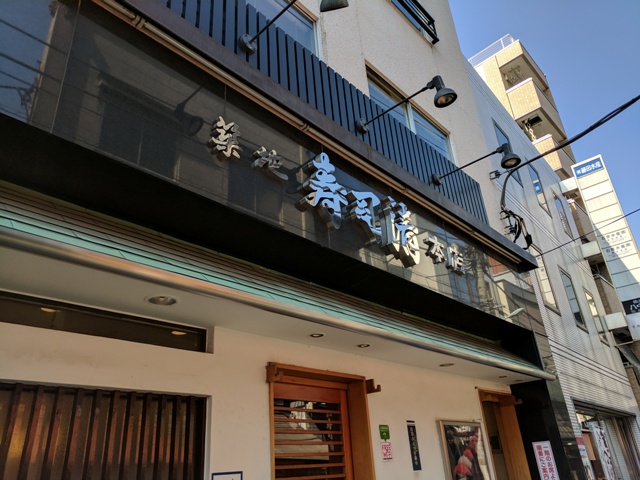 From Tsukiji Market, we walked over to Hamarikyu Gardens, which sits near the water. 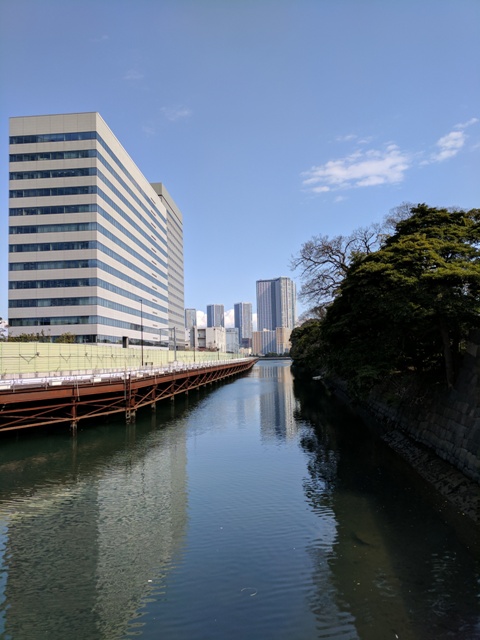 This is a good viewing area for cherry blossoms.  Like I had mentioned previously these first few days in Tokyo were not great for cherry blossom viewing because the weather had been cold and rainy, which is not conducive to blossoming.  There were still some trees that were blooming and people were definitely taking pictures. 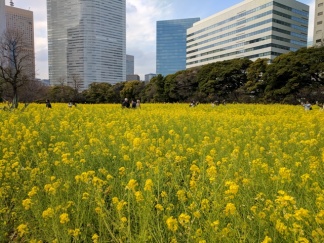 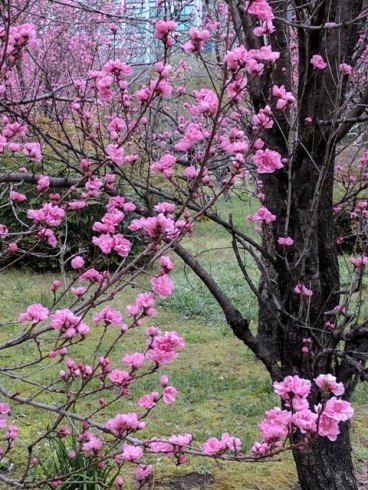 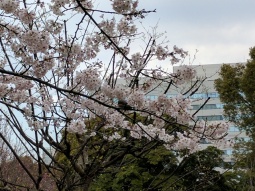 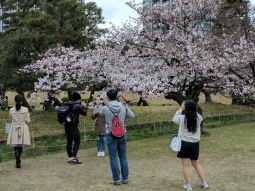 To mix it up, the plan after the gardens was to check out the main Asics store in Tokyo because we were still on a shoe hunt.  Surprisingly the shoe store itself (supposedly the “main” store) was actually quite small.  There were some Europeans in the store trying on shoes.  Maybe it is cheaper in Japan than in the US.  I will say the shoes would be slightly cheaper to buy in the US so I didn’t seriously consider getting a pair (though I do like Asics as part of my running corral of shoes). 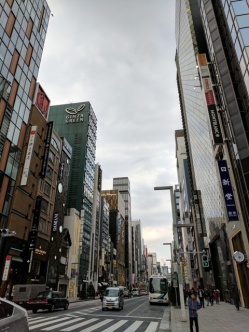 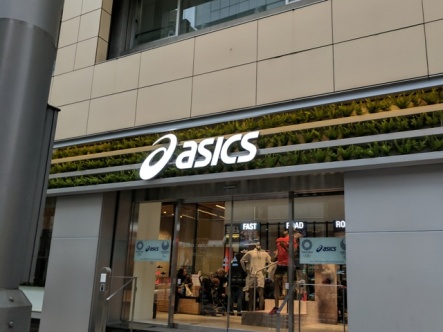 For dinner I wanted to try a Yakitori place.  We hopped on the subway and went to Ebisu.  It was a little early for dinner so we walked over to Yebisu Garden Place Tower.  Acclaimed chef Joel Robuchon actually built a Chateau in this shopping mall to house his Michelin-starred restaurant.  It was a bit out of place in the midst of Japan but was kinda funny to see as a juxtaposition.  The Japanese also have a bit of an obsession with the French as well, which is actually a good pairing because they both have great food and fashion.  We were going to try visiting the Yebisu beer museum but it wasn’t open.  Sad.  We did walk through some higher end store. 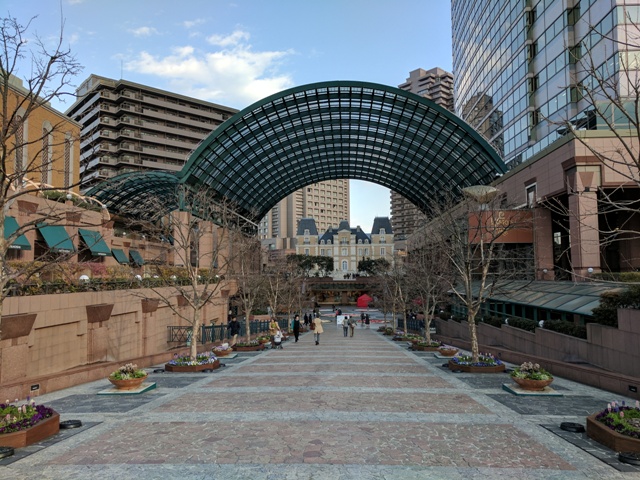 It was a bit difficult locating a yakitori place because some restaurants are downstairs in a basement and some upstairs.  We eventually settled on going down some steps into a non-descript dark staircase ending at a door.  Luckily once we opened the door, there was a yakitori restaurant with a long bar (by long it was actually small and sat maybe 12 people).  Luckily one of the employees actually spoke some English (and his other chef/coworkers allowed him to do pretty much all the interaction with us).  I ordered a bunch of weird things (chicken heart, liver).  They served the chicken medium-rare, which is something you’d never see in the US but it actually was very tender and tasty.  Overall I enjoyed it, though it wasn’t a ton of food. 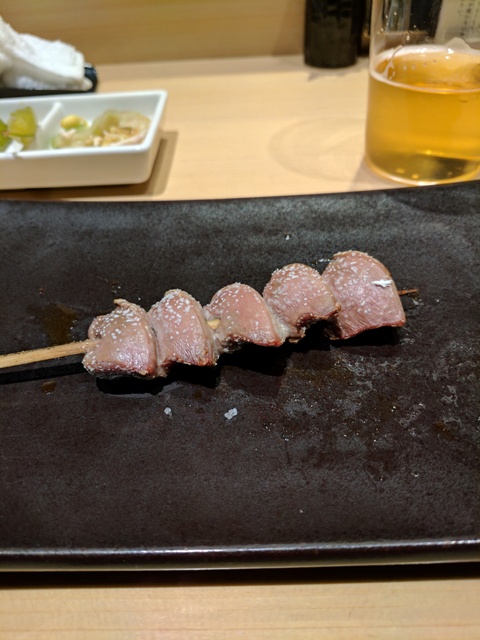 Right next to the subway stop that we walked out of was a Shake Shack.  We never made it to Shake Shack when we were in NYC and since we still were a little hungry, I suggested we stop in and have a burger so my wife could experience it.  It was a little funny that we were halfway around the world to try a US based burger chain.  The wife said that it was a good burger.

On our way back to the hotel before turning in for the night we checked out one more sports store near our hotel looking for shoes.  I found it fascinating to walk through a sports store in Japan.  I took a picture of some socks because I thought it was funny. 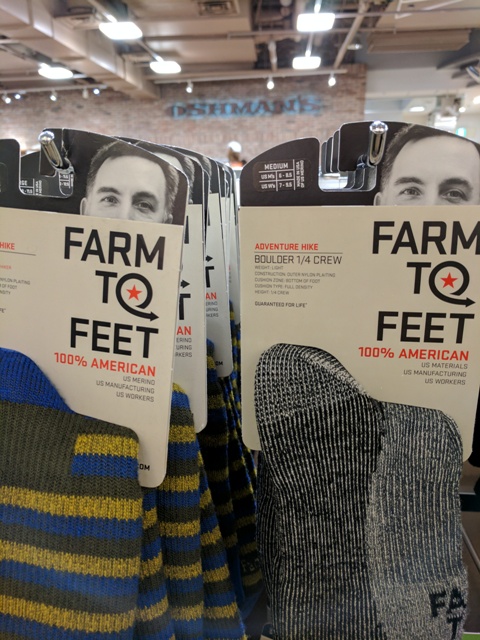 Sacramento is the Farm-to-Fork capital and the socks have a funny name.

And that was the end of Day 5.