After a restful sleep, we awoke and ordered some room service and then decided to head over to the Imperial Palace area along with Tokyo Station and the many things around that area.  The weather was still fairly overcast and rainy, my wife was very smart and brought an umbrella.

We walked around the outer perimeter of the Imperial Palace but didn’t try to go inside.  We started to get hungry and went looking for a snack.

Near Tokyo Station is the KITTE building, which houses a lot of stores as well as restaurants.

I had read about it on a web site and since we were right there, we stopped in.  It was still fairly early in the day so they weren’t letting people go up onto higher floors.  So we headed to the basement and walked around where they had little shops of various food items and small trinket type things.  We got some Chicken Karaage from the convenience store.  This is essentially their version of chicken nuggets.  I also had an Onigiri (which became a theme of the trip).  Onigiri are triangles of rice wrapped in seaweed and filled with various items (I ended up trying some that had tuna salad, smoked salmon, fish roe, egg, etc).

We were really looking to snack on some Taiyaki, which is a fish shaped pastry that is filled with red bean.  This took us on a hunt through Tokyo Station’s many hallways of stores as well as the Yaesu underground mall.  I was following the directions on the GPS and it kept taking me to a set of restaurants but no Taiyaki.  After a frustrating time searching, we saw on the map that there was another stall/store that sold Taiyaki and found that relatively quickly and we had one.

The Japanese have this protocol that you aren’t supposed to eat while walking or what not.  This is very different than in the US where we walk and eat all the time.  We actually huddled next to some stairs to eat this and I could feel people’s eyes on us judging us for eating in the hallway of the underground market area.  Oh well.

And then it was lunchtime.  Because of how busy many places get, it is recommended to arrive at or just before opening (usually 11 AM) to be able to get a seat.  I had found a Tempura place near Tokyo Station so we walked over that way.  However, we arrived too late (it was only like 11:15 AM) and they said that they had no more tables.  They didn’t even offer a wait so I guess it is a “one and done” type of place.  We walked over to the Ginza district. This is more of an upscale area with fancy stores.  The wife wanted to check out COMME des GARÇONS, which I figured would be a French company but really is Japanese (again the Japanese love the French culture).  They have a whole building (6 floors of merchandise) in the Ginza district called the Dover Street Market.

We found a place to eat in the building next door (Kojun Building) to Comme des Garcons. The meal was pretty good.  It was a more traditional multi-course meal.  For some reason I wasn’t used to having so much food (even though it wasn’t a ton) and didn’t finish everything that was provided.  After lunch we perused the Comme des Garcons some more and also checked out Uniqlo (which had a building across the street and also took up 5-6 floors).

And then it was off to another tourist destination.  Our next stop took us to the Zōjō-ji temple, which is a Buddhist temple. 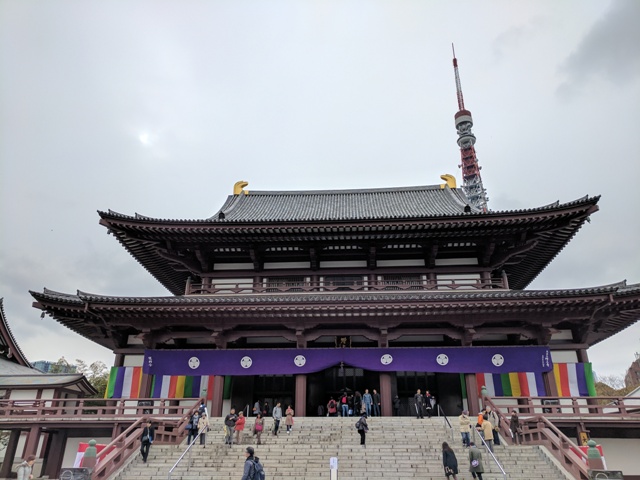 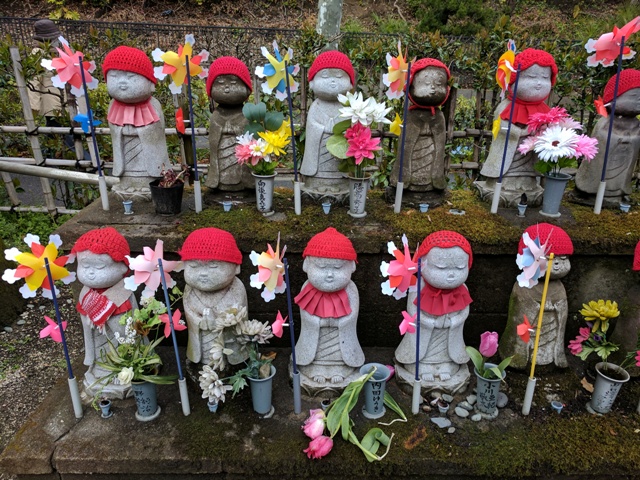 The temple was relatively busy with tourists – a lot of them from Mainland China.  Something I noticed was that there were a lot of women dressed in the traditional Japanese clothes but they were speaking mandarin.  We later learned that you could pay about $30-40 US equivalent to get dressed up in the traditional Japanese clothes for the day and so we were seeing tourists dressed up and not actual Japanese people.  The cherry blossoms were starting to bloom more than when we first arrived in country.

From the temple, we walked to the nearby Tokyo Tower.  It’s a communications and observation tower.  We didn’t go up to the top though.

We had to get back to our hotel since we had reservations at the New York Grill on the top floor of our hotel.   On our way back, we passed by the Yoyogi National Gymnasium, which has a suspension roof design.  There was some sort of concert type event going on and many people were flocking to one of the entrances.  On the outside, they had multiple football (soccer to us Americans) fields with people playing.

We walked through Yoyogi Park to get back to our hotel and saw many people picnicking under the trees.  Again there weren’t a ton of trees blossoming, but people were still enjoying themselves by picnicking.  I guess it is a big tradition to picnic under the blooming cherry blossom trees.  They also don’t have open container laws so I saw many people drinking beer.

We had dinner at the New York Grill in our hotel.  We luckily had a seat by their floor-to-ceiling glass windows and had a lovely view of the city from 52 floors up.  We each had the Hokkaido Akaushi Sirloin steaks and had their Crispy Duck Fat Fries and Broccolini.  I learned that in Japan, they call the different levels of wagyu not on letter/number but based upon the location that the meat comes from.  Either way, the steak and sides were delicious.  Since we were at the New York Grill, we decided to share the New York Cheesecake, which was just all right.  Nothing to write home about.  Initially we considered moving over to the bar portion of the top floor but seeing as how busy it was, we elected to call it a night after a satisfying meal.

The following morning we woke up and headed way east of us to the Asakusa district to see the oldest temple in Tokyo, Sensō-ji temple.  I remember visiting this temple back when I came to Japan with  my family in 2003. 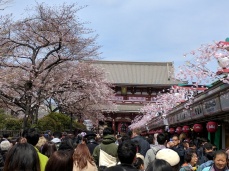 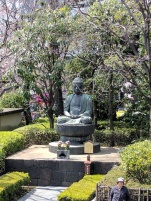 There is a long walkway lined on each side by shops leading up to the temple.  I thought the temple from Day 3 was busy but this placed was packed.  It felt like being canned sardines as we made our way through the stall-lined walkway to the actual temple.  We each picked up a nori-wrapped rice cracker, which was delicious.  Deborah also purchased a bag of these pastries filled with red bean.  They had fun bird and temple shapes. 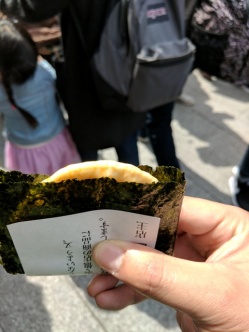 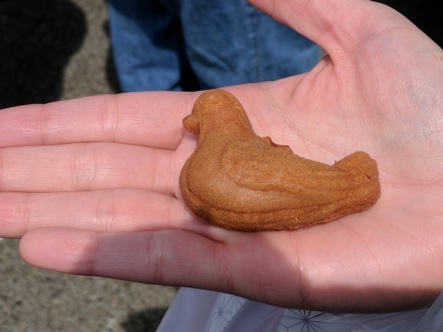 After walking around the temple area, we popped into a small mom and pop restaurant for lunch.  I had the tempura bowl, which was a mix of squid/onion over rice and my wife had Tonkatsu chicken over rice.  Both were good. 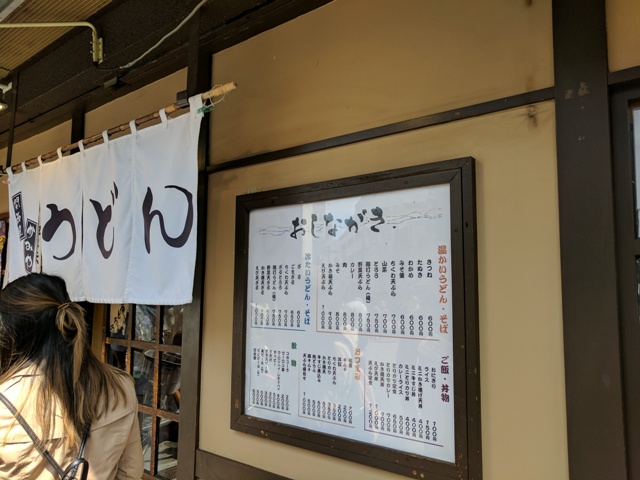 We jumped back on the JR and went to Ueno.  Located here is Ueno Park, which is a huge park that has multiple various buildings.  The cherry blossoms at this location were definitely blooming and the picnicking people were out of control.  Add to that the many tourists and it was another very crowded place (sensing a theme?). 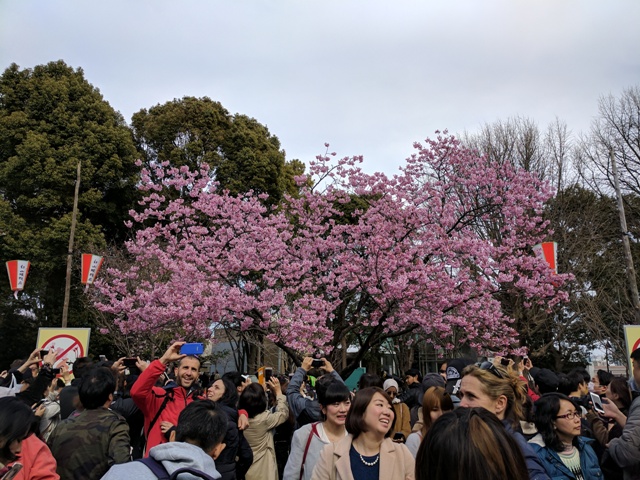 At the northern end of the park is the Tokyo National Musem.  While there are multiple buildings all with their own unique things to see, we stuck to the main building.  Sometimes we tend to speed through museums and we actually took a little bit more time and made our way through all the various rooms of the main building.  I enjoyed seeing the armory exhibits with the different body armor and more importantly the different katanas and other swords. 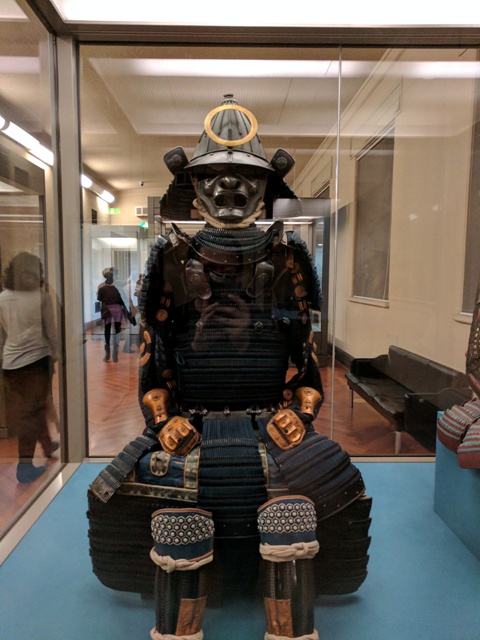 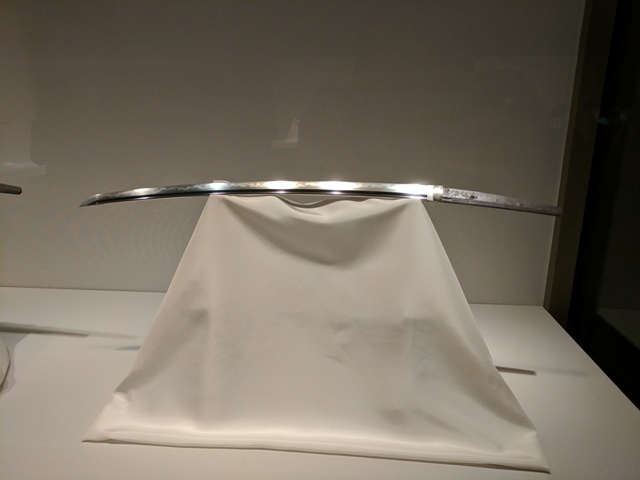 From the museum we tried to go get cocktails at a cocktail bar that I had read does flights of craft cocktails with local ingredients, Gen Yamamoto.  This bar is in the neighborhood Azabujuban, which I thought didn’t sound very Japanese.  Unfortunately, when we arrived, all the lights were off and the doors locked.  My phone said that they should have been open but they weren’t.  Disappointed, we ended up checking out Pizza Strada, which was nearby.  Since we love pizza, I had read about a new trend in Japan where they were putting their own twist on the traditional Neopolitan style pizzas.  Some Japanese chefs traveled to Italy and came back opening up pizza shops.  Over time they’ve adopted their own styles to the pizza.  I gotta say it was pretty good.  It was also a nice break from all the Japanese food we had been eating.  Normally at home we tend to vary our meals by eating various genres of food.

To work off some of the food and beer we just had, we jumped back onto the subway and went over to the Harajuku, which is a district in the Shibuya district.  This area has tons of stores and shops.  We were on a semi-hunt for some good walking shoes for my wife.  She wanted to check out the Onitsuka Tiger store.  I actually have some Onitsukas that I’ve been wearing for the last few years.

We ended the night back at our hotel at the New York Bar on the 52nd floor.  I did a flight of Japanese whiskeys.  Japanese whiskey takes after scotch.  The three that I tried were Yoichi, Yamazaki, Miyagikyo.  Some were peaty, some more smoky.  Overall they were all right but not my bailiwick.  Maybe when I’m older.

I also had a few other cocktails including a Manhattan and an Old Fashioned.  It was nice because they had a live jazz singer.  Overall a great atmosphere and drink (we also had some appetizers – chili and their duck fat fries).

I may have indulged a little much as I paid for it in the morning.  Oops!