Quick bread update.  I decided to use more of my sourdough starter to make this week’s 50% whole wheat sandwich bread.  This week I essentially used the same recipe as last week’s but with the addition of the sourdough.

I combined all the above ingredients into one giant slurry and let it auto-lyse for 30 minutes.  I am always amazed how the dough goes from a ragged mess to a cohesive and firm dough.

I did the slap & fold kneading for 15 minutes.  Each time I do this, I get better and better at sensing/feeling the dough coming together and becoming less sticky.  The first time I did this, I had no idea how long I was supposed to knead for and ended up doing the slap & fold for almost an hour.

After I finished the slap & folds, I put the dough in a clean bowl and let it bulk ferment for an hour.  As seen above, the dough really formed up very nicely.  Following bulk fermentation, I dumped the dough out on my lightly floured countertop and performed a stretch and fold (envelope style) and placed the dough back in the bowl for 20 minutes.  Once more I did a stretch and fold followed by the initial shaping.  This involved de-gassing the dough and creating a square shape.  I then folded the dough down from the top to the middle of the dough and pressed this down.  Subsequently I pulled the dough once more to me and pressed down to seal it (essentially creating a log shape).  I then bench rested the dough for 5 minutes and then re-shaped into loaf shape.  The dough was then placed in a well-greased (butter) 9″ x  5″ loaf pan.

I allowed the dough to proof for about 45 minutes (the kitchen was warm because I was also making pizza).  As with last week, the dough had risen really well.  I did the finger poke test and noted the dough was well proofed.

The bread went into a 425 F oven with water spraying.  I let it bake at this temperature for 10 minutes.  I dropped the oven to 375 F and baked the bread for another 25 minutes.  By this time, the top of the loaf was a nice dark brown color and the internal temp 187.7 F.  I read that enriched bread (which this is) is done between 185-190 F and you can let it go until 205 F if you want a really crunchy crust.  This time I decided to remove it a littler earlier to see what kind of difference it would make (last week’s was around 195 F). 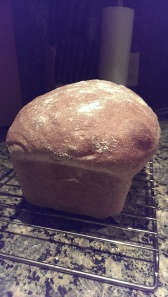 After slicing, I noted that the bread was just slightly underdone.  If you look at the cross-sectional view of the crumb, you’ll notice at the bottom part of the bread, the crumb is a bit collapsed and not well-aerated like the rest of the bread.  Next time I’ll probably try to get it closer to 190 F internal temperature.

This bread turned out good, still a little weaker than I’d like for a sandwich bread.  I wonder if I toasted it before making my sandwich if it would hold up a little better.  The wife said that it is softer than last week’s effort.

In other news, we were able to top our pizza with some homegrown arugula.  We decided to try some lettuces this year in our raised vegetable beds.  This was a first and out of the 4, the arugula is the only one that grew well.  There was a different lettuce that initially grew well then one day was all gone.  I am suspicious the local wild turkey came over and chomped it all away.