Finally the last installment of our French Tahiti trip (previous islands here & here).  It almost feels like a lifetime ago that we were lounging in the paradise.  It’s been busy (mostly work) since returning from the trip.

(Links to the other islands: Tahiti & Moorea)

We arrived at the Moorea airport from the Intercontinental Moorea.  I don’t think I’ve ever been a smaller airport.  There was no security.  We literally walked up to the desk, gave our passports, checked our bag (which involved throwing all the luggage onto carts to manually take out to the plane) and got our tickets.  The waiting area could maybe hold 50 people comfortably.  D had done some research and said we should sit on the left side of the plane because then you get views of the islands (including Bora Bora) as you’re approaching.  We boarded a 2 prop plane that probably held 100 people for the 45 minute flight.

They served some pineapple juice on the short flight.  The highlight of course was seeing Bora Bora from the air.

As you can see, Bora Bora is comprised of a large main island surrounded by a ring of smaller islands.  The airport is in the northeast outer ring.  This means the only way to get anywhere from the airport is via boat.  Luckily our resort (Le Méridien) – along with some others – had their own boats ready to whisk us off to paradise.  The 25 minute ride brought us to the hotel’s dock. 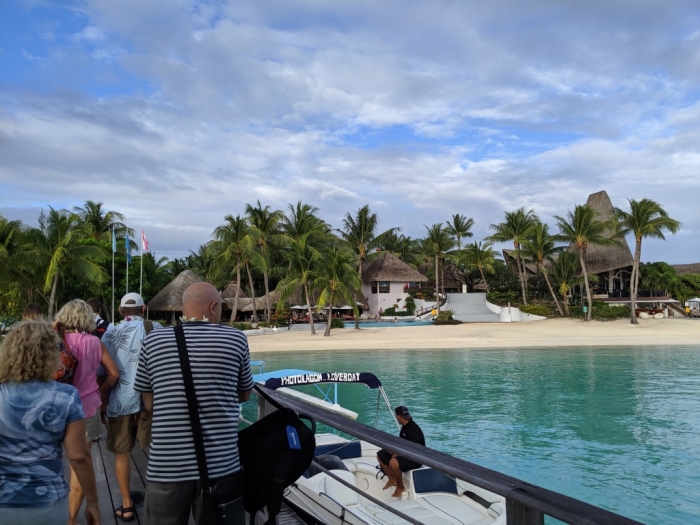 Each party was then individually checked in – they gave us some juice and had us sit in a covered area and one of the staff went over some paperwork and then gave us a tour of the facility.  We took a golf cart to get to our overwater bungalow (our luggage magically showed up on its own later). 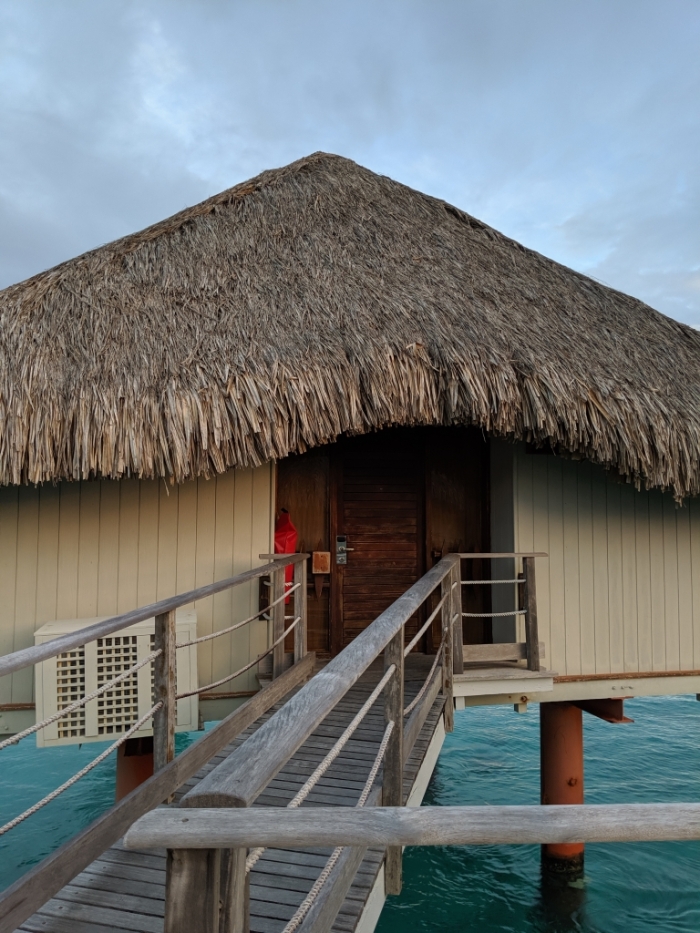 The resort was set up with 2 restaurant options, 2 bars (where you could order food as well), a lagoon area next to the main buildings and a private beach where you could borrow all sorts of things (snorkels, kayaks, paddle boards, jet skis, etc).  At the back of the resort there was a large lagoon pool and a small area for turble rescue.  This was the main turtle rescue and rehabilitation for all the islands.  Their gym was a small round glass enclosed structure that had some machines and free weights (I did not utilitze it at all).

Once we arrived at our overwater bungalow, we were just overwhelmed with both the views and the surreal experience of being in paradise.  The bungalow (even though it was one room) had a bed area, sitting area and bathroom area.  There was a balcony area with a spiral staircase down to a deck where you could get in and out of the water.

Since the resort is on one of the outer rings of Bora Bora, we were hotel bound for the rest of the day.  We made a reservation at one of the restaurants (Le Tipanie) and grabbed a drink at the Miki Miki Bar beforehand. 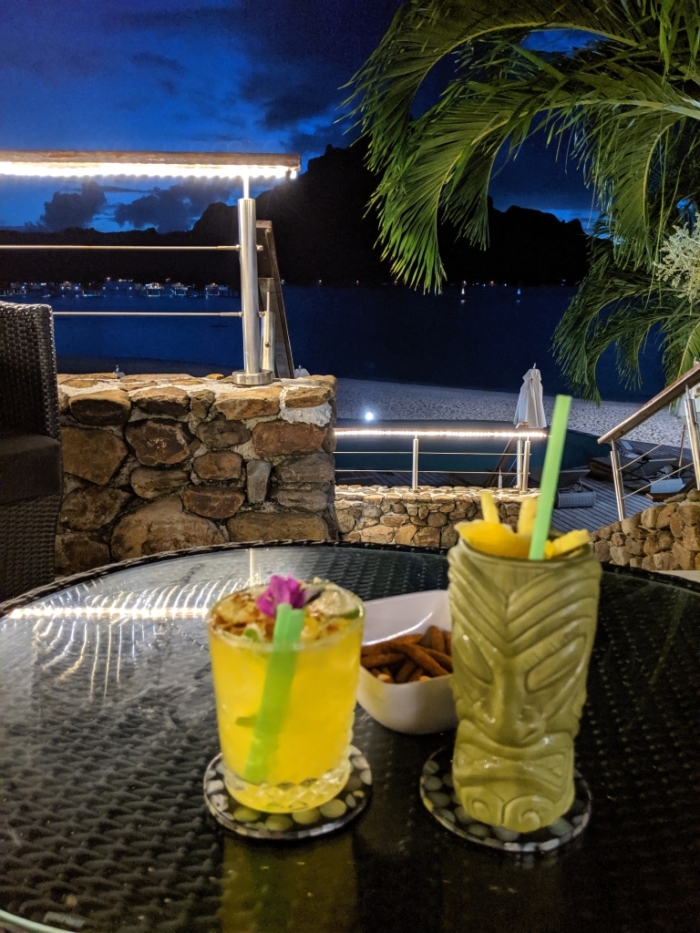 Dinner was nice as we sat adjacent to a small pool area in the lagoon that had tons of fish swimming around (this was also the setting for all our breakfasts during our stay).   The food overall was nice and I had no complaints.

The following day we had planned to go to the main island of Bora Bora.  We hopped on the resort’s boat again to take the 40 minute ride to the main city of Vaitape (you have to circle around the island to the west side).  Upon arrival we picked up our rental car, a cute little 5-speed Fiat Panda.

One thing I really enjoyed about trip was the fact that we were able to explore the islands and not just hang out at the resorts.  It was refreshing to see the local areas and learn a little bit about the culture.  I’m appreciative my wife is up for going sight seeing – granted I’m not the most social person so didn’t interact so much with the locals but just being able to observe and be in the local area was very nice.

The main island is only 37 miles to drive around so we took our time and drove north from Vaitape and then around to the east side and to the southern tip (Matira Point and Beach).  There are some hotels and quite a few restaurants and beach areas in this location.  Before hitting up the beach, we stopped at a small local perfumeria that D had read about. 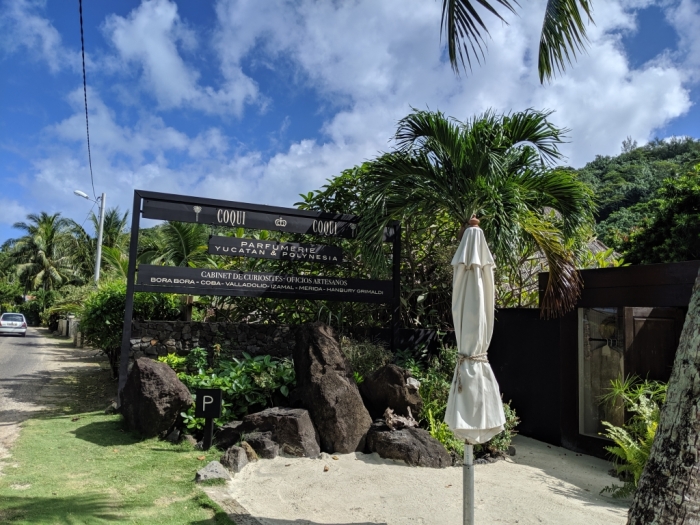 This was quite a small shop.  Talking to the proprietor of Coqui Coqui she had moved to Bora Bora a few years prior after spending 10+ years in Mexico making perfumes there.  I’m not much into perfumes and scents but I know it is something that D likes but it was interesting to hear about the process of making the scents as well as the various types.  We picked up some items for family and for ourselves.  She also gave us a tip for lunch at a local restaurant.

We then hung out at the beach and I spent time in the water.  The water in all the places we visited was very pleasant to be in (not too warm since the ambient temperatures were overall warm).  While I was hanging out in the water I noticed some big shadow swimming very close to the shore.  I moved in that direction and realized there were 2 large stingrays just hanging out (some other people apparently had some stingray food that they were using). 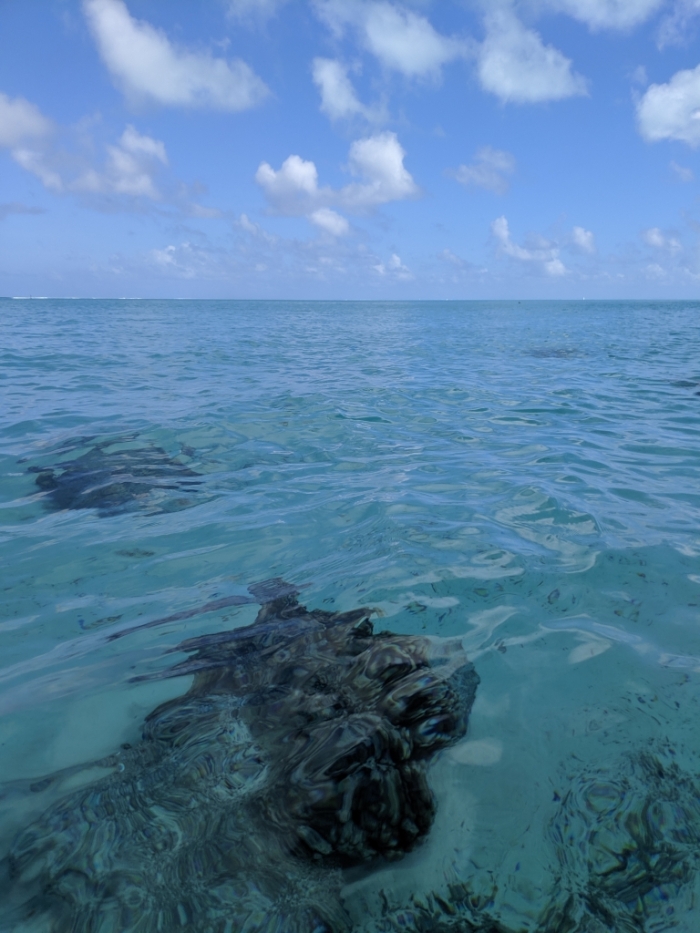 We were getting a bit hungry so went to grab some lunch at La Matira Beach Restaurant.  We decided to get some tropical cocktails of course and then split the fish burger and the Poisson Cru. 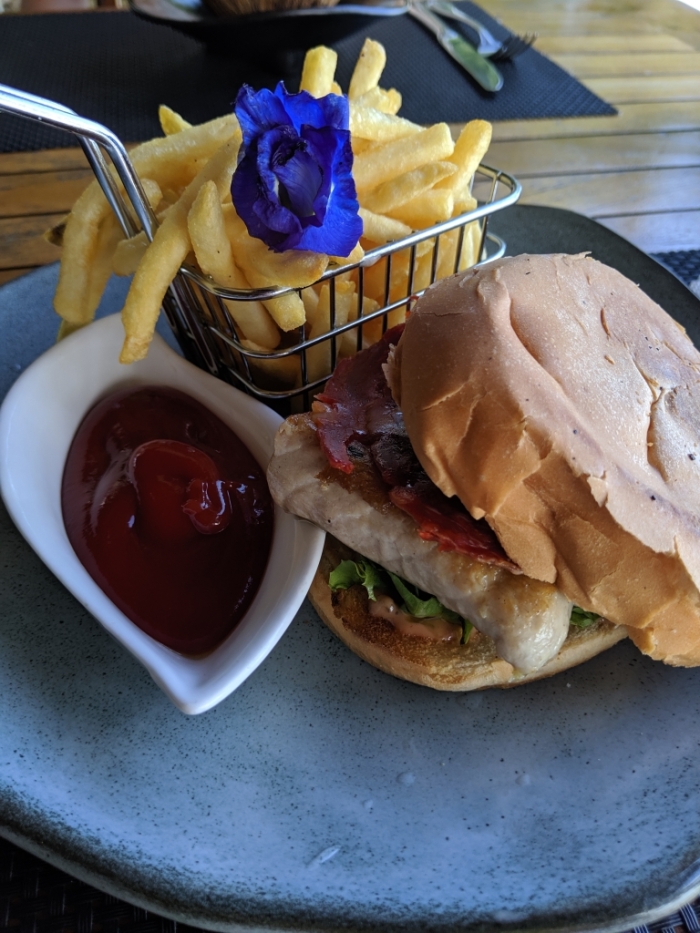 There are a number of stray (and maybe owned but free to roam) dogs all over the various islands and this area was no exception.  This guy sat at the beach just below us and begged for some food – and guiltily we obliged some.

There was a man on the beach cleaning it up (he would dig a hole, then rake all the shells and such into the hole and then cover it with sand – very clever way of cleaning).  He also took out the Polynesia canoe, which was cool to see up close.

After lunch we drove back to Vaitape and walked around the city looking at the various shops they had there.  We also checked out a higher end art store that had both paintings as well as other collectibles (jewelry, sculptures, etc).  Since water was so expensive at the resort, we picked up some water at a small shop that we hauled back to the resort at the end of the day.

Since we still had quite a bit of time to kill (boat shuttles to the resort only run a few times a day), we went back to the beach to just relax.  We watched some of the local dogs go swimming and up to strangers looking for attention and also found some very tiny friends in the numerous hermit crabs.

By late afternoon we returned the car, hopped on the shuttle and back to Le Meridien we went.  We had initially asked the concierge if we could get dinner reservations at the Lagoon Restaurant for the nearby sister property of The St. Regis.  Unfortunately they didn’t have any spots so we decided to try the other restaurant at our hotel, Te Ava.   This restaurant was billed more as a grill type restaurant.  Unfortunately something occurred with the staff that evening and the service was quite poor.  We did not receive our drinks until we were close to finishing our main courses.  I do give them credit in that they comp’ed our drinks.  The food was actually tasty and well made.  I had a starter with some fried calamari and shrimp.  D had the seared tuna and I had the duck.

After dinner we enjoyed the view of the night sky.  Since there is minimal to no light pollution, you have a very clear view of the stars in the sky.  D also read that you can see more stars in the southern hemisphere.  Surprisingly (or not), this was both of our first times below the equator.  I honestly didn’t pay attention to how the water spun  down the toilets (from what I remember on TV, the water spins the opposite direction in the southern hemisphere as it does from the north). 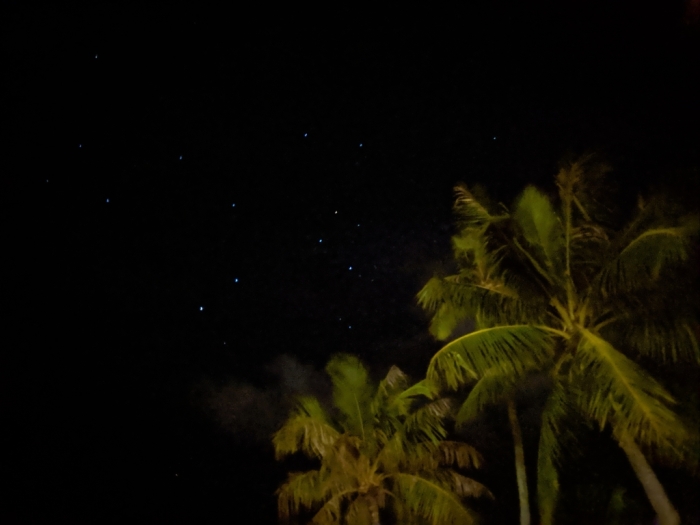 Our last full day in paradise was going to be a relaxing day at the resort.  After our lovely breakfast buffet, I decided to jump in the water from the bungalow.

They had an information session and turtle feeding where we learned about the various types of sea turtles that inhabit the water.  The guy was pretty funny telling us about the conservation efforts.  They don’t keep any of the turtles and rehab and then release when they can.  Pretty neat! 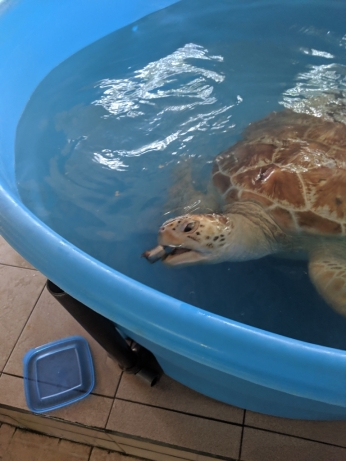 We also hung out at the beach and enjoyed the water.   D had a massage scheduled for after lunch so we had a light lunch of nachos delivered to our bungalow.  While she was getting her massage, I decided to try something I’ve never done before: SUP.  I’ve heard/read so much about how it’s a great workout and thought this would be a good place to try it.  I did think it was a good workout but for some reason my balance isn’t the greatest.  I managed to stand and go for a good 10-15 minutes but then lost my balance and took a spill into the water.  After that I was a bit gun shy and paddled while on my knees. 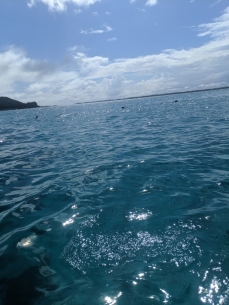 After returning the SUP, I went swimming in the more protected inner lagoon.  They had a floating platform that I swam out to.

I felt like there were more fish to be seen in this area – it is part of the lagoon where you eat by at Le Tipanie.  After D’s massage, we decided to hang out on the beach some more.  Dinner and drinks were at the Miki Miki Bar – always a good night when your bar tab is more than your food tab. 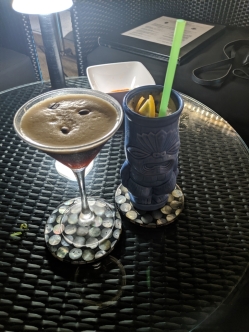 I had arranged for a late checkout (2 pm instead of 11 am) since we weren’t leaving the island until about 4:30 pm.  On the way to breakfast I looked over the railing of the water bungalow walkway and lo and behold I saw a shark!  So cool!

After breakfast we elected to hang out on the beach again.  I got a little restless and decided to get some exercise in by kayaking.  They had glass bottom kayaks, which was neat and I paddled around both sets of bungalows.  As I was coming back to the main area by the beach, it started to rain so I paddled much faster to get out of the weather.  We then chilled in our room and packed up our stuff.  Since we had a few hours to kill before our shuttle, we read and also played pool in a small rec room that they had 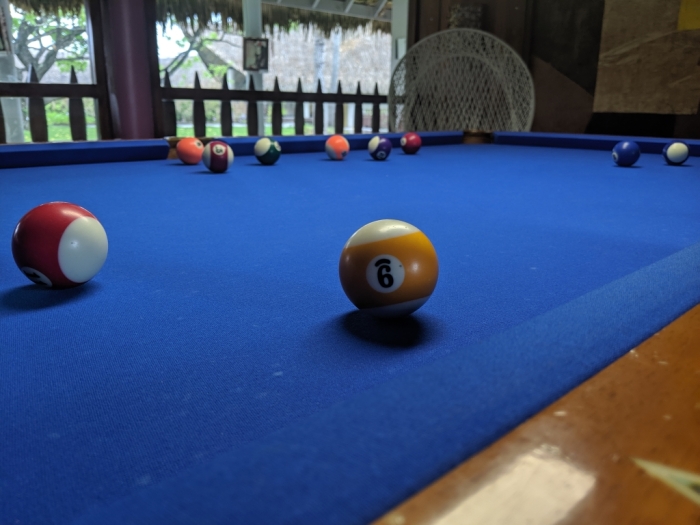 And then we were off – boat shuttle to the airport, flight to Papeete, and then flight back to LAX.

I’ll post a separate post with my final thoughts on the islands and our trip, as well as the service we used (pacificislands.com).