(Links to the other islands: Tahiti & Bora Bora)

The morning of our third day in paradise started with a buffet breakfast at the hotel.  Our checkout time didn’t correspond to when our shuttle was to transfer us from the hotel to the pier for our boat ride to our next island so again we had to sit and wait in the lobby area.  Thankfully this was much shorter than before.  Our shuttle driver turned out to originally be from Cali and had been in French Polynesia over 18 years but his daughter is currently going to school in Cali.  The boat ride from Tahiti to Moorea took about 45 minutes.  It was a smooth trip over and gave great views of both Moorea (ahead) and Tahiti (behind).

We were picked up by another shuttle bus and taken to our hotel (another Intercontinental) with a brief stop at the Hotel Manava to drop off the majority of folks.  The trip took about 45 minutes overall.  The day turned out to be very clear and beautiful but also meant the sun was very intense.  At check-in I was just standing there and just dripping sweat.  What I learned about all  the resorts is that the main areas (reception, lobby, etc) are all open  buildings (meaning there’s a roof to shield from rain but there are no walls/doors creating an open feeling overall but meaning there was minimal ventilation – ceiling fans). 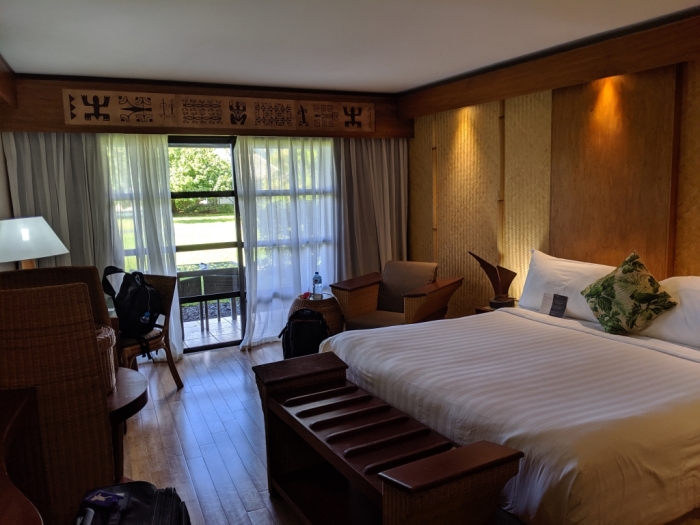 Even though we went from an Intercontinental to another one, the finishings felt like a step down in terms of quality.  As an example, our end tables were attached to the wall and floating and both mine and D’s were both slanted downwards (to the point I was worried they were both going to fall).  The theme of the room decorations at least were more on point with being on a tropical island.

The resort had some interesting areas such as the Moorea Dolphin Center. 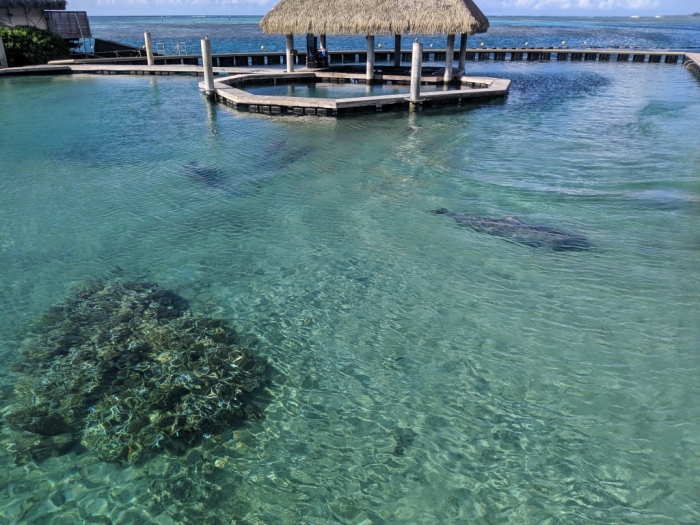 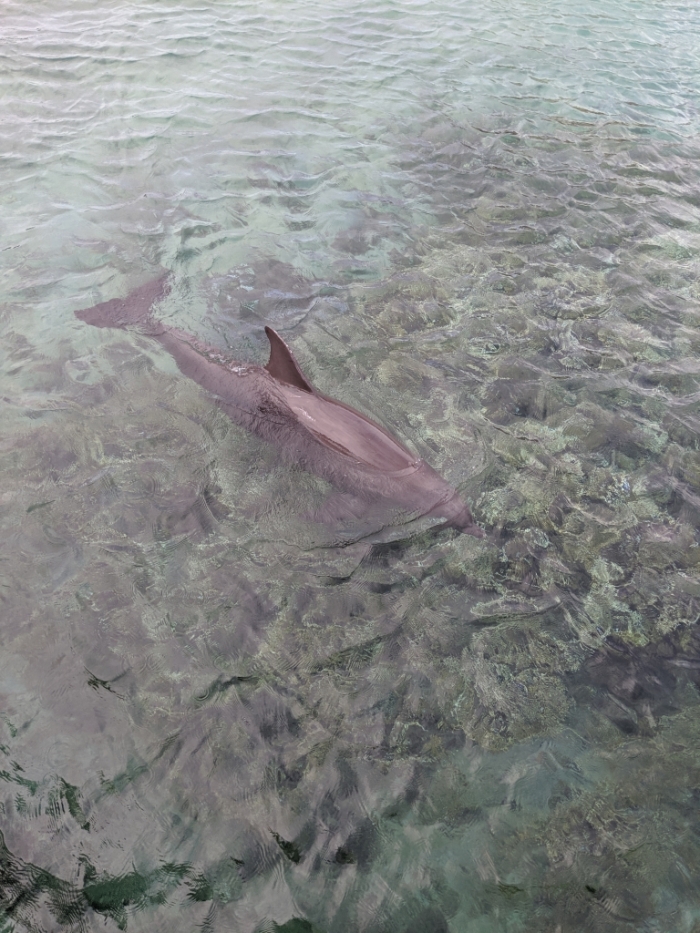 They have 3 dolphins on property but unfortunately we weren’t able to learn as much about them because of the construction going on within the property.  They weren’t running any of the interactive activities with the dolphins due to concern for stress triggered by the sounds of construction.  It was relaxing to just watch them swim around – though of course a part of me wondered if they were bored being stuck in a large pen.  Supposedly there were a few different areas they could hang out in.  There was also a sea turtle rehabilitation area (which I later learned on Bora Bora is essentially a satellite of the main turtle rescue/rehab located on Bora Bora at the hotel we stayed at there).  We saw a few turtles hanging out in this area. 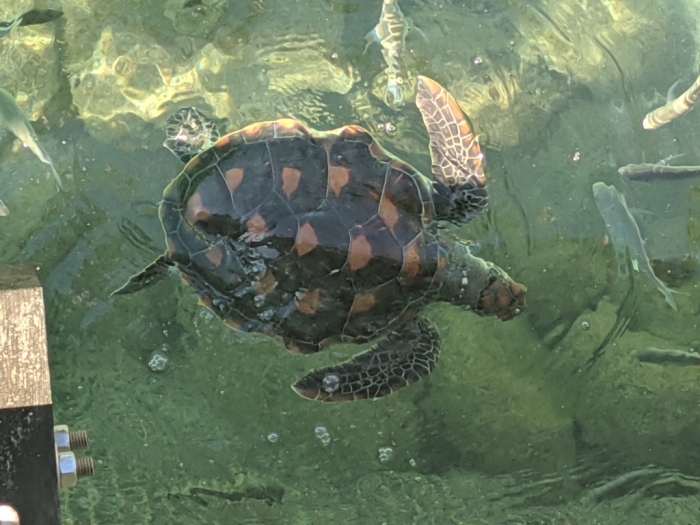 There were 2 pools (stacked next to each other) with a poolside bar.  They also had a private beach area and then a more secluded lagoon area surrounded by their over water bungalows (these were different in that each one was partially on land vs the completely above water bungalows you’ll see in my post in Bora Bora). 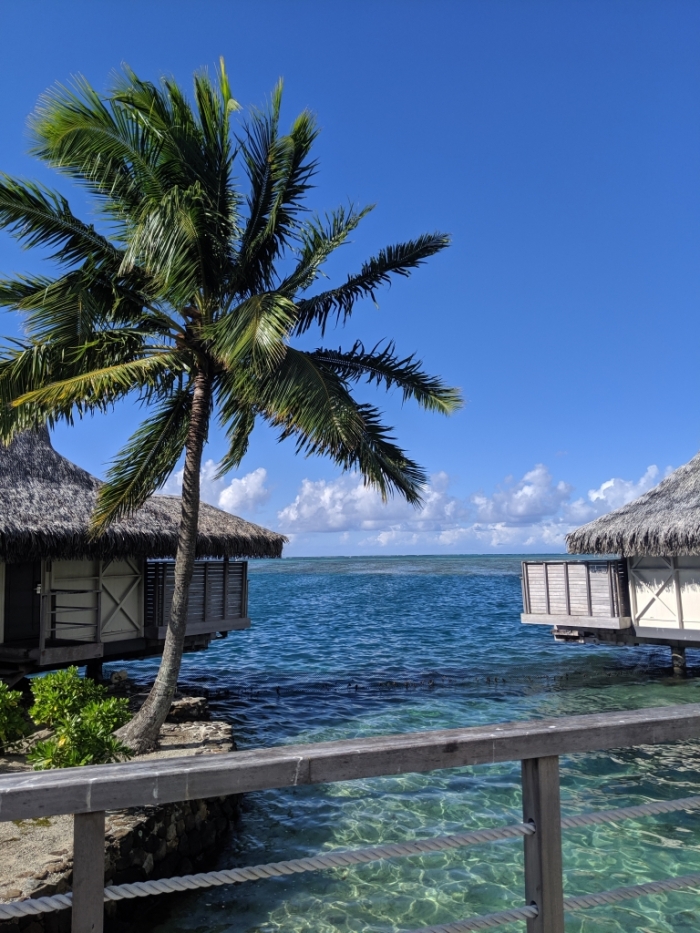 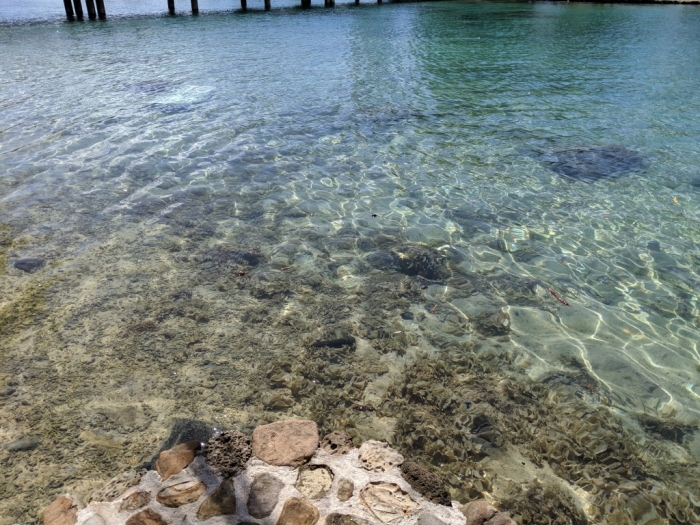 After walking around the property for a little bit we grabbed some lunch at the poolside beach bar and then hung out in the pool and went swimming in the lagoon area.  I was able to see quite a bit of different fish in this are and use the snorkel we borrowed from my folks.

Because of the construction, the hotel was offering free dinner for each night’s stay (and our package included breakfast, which was great).  The construction didn’t really affect or bother us or interfere with our relaxing.  As a perk getting free dinner saved quite a bit of money.  Costs at resorts are inflated and also being on a tiny island in the middle of the ocean also increases overall cost of goods. 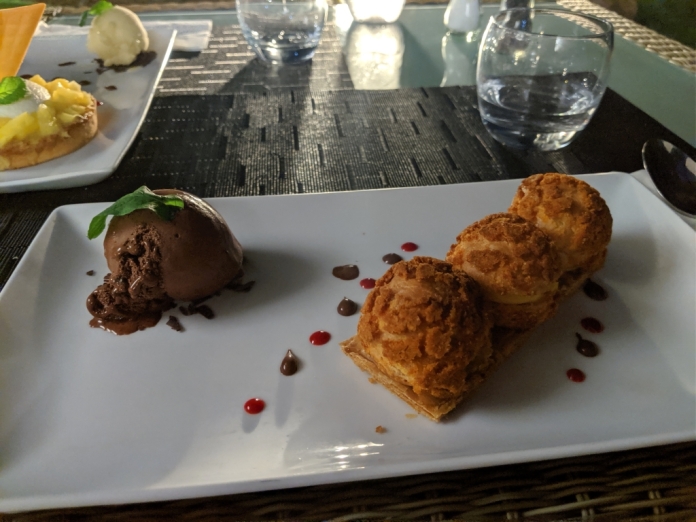 The following morning I woke up earlier and wanted to work out.  The gym here was in one of their inland bungalows (i.e. small room).  Surprisingly there were already 3 people in this room working out.  Unfortunately the AC/ventilation wasn’t great and one of the guys had some funk.  Also he was on the treadmill so I ended up doing the rower (both Intercontinental resorts had the Concept2 rowers) and some body weight exercises but didn’t stay too long.  I also refilled our water bottles (water is an expensive commodity on the island in the resorts).  We had a nice spread at our buffet and then got our rental car (luckily the Avis was situated in the hotel itself so it was just a matter of walking to the parking lot – this time it was a Dacia Logan).

Our plan was to circumnavigate the island (It is only about 40 miles all the way around the island).  With the speeds at 40-60 kmh, it would take about an hour and fifteen minutes to drive around non-stop.  We had a few stops in mind, the first being the Tiki Village (Culture Center).  We arrived around 10:45 am and the ladies at the entrance said they didn’t open until 11 am but we could look around their little gift shop.  We kind of hesitated and I think that prompted one of them to allow us in early. This was a collection of huts that had some historical exhibits present.  One of the residents that lived on site came and started to give us a tour.  She told us that the Tiki Village residents were all various artists.  Aside from the exhibits, the people there also did interactive demos such as how to make poisson cru, how to wrap a pareo, or weave with the palm fronds.  We weren’t interested in getting sucked into a time-consuming activity so politely declined doing an activity and eventually snuck out.  We did briefly look in their black pearl shop and learned there are actually like 13 different colors and various shapes (aside from just spherical).  I like that they celebrate all shapes and colors whereas with regular pearls what I know is that you want as perfectly spherical as possible and that nice white pearl color.

The rest of the drive around the remaining western coast and southern coast was mostly just shoreline and houses with the occasional small town/shop area.  As I think I stated previously, Moorea definitely felt more lush than Tahiti.  There is a Lagoonarium on the eastern coast of Moorea but I read some reviews that weren’t so flattering and we didn’t really feel like doing a lot of snorkeling so we didn’t end up stopping.

Not too far from the boat dock was Totea Lookout and we pulled over to get some nice pictures.  On all the island we visited, they have wild chickens just wandering and hanging out.  I ended up getting some nice pics of them.  The males definitely have some pretty colorations. 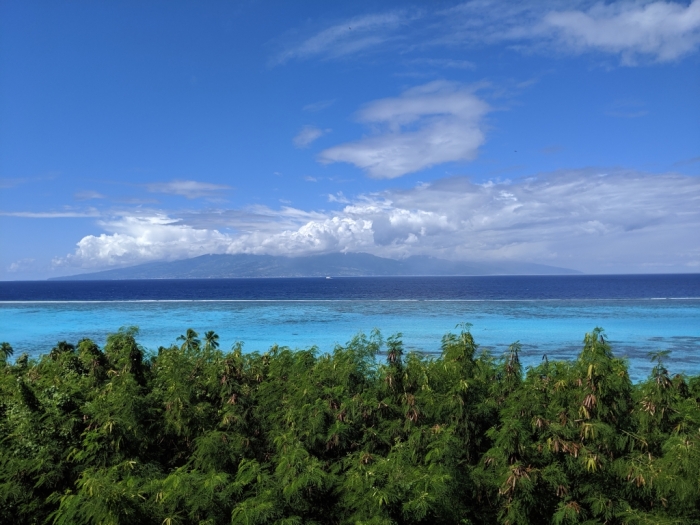 We did however stop at one of the public beaches.  It was a Saturday and a lot of locals were out just hanging out at Plage publique de Temae.  Again we hadn’t packed for a beach day so unfortunately just watched some people chilling and then kept going.  Our next stop was Manutea Tahiti – Rotui Juice Factory & Distillery, however we arrived at noon right when they closed that day so didn’t get a chance to see it.  After a brief stop in Cook’s bay to take some pics we drove up this “road” (really just dirt and rocks) and climbed up a fairly steep incline long driveway to Tropical Garden.  The name is deceiving as it is a juice bar that also serves food on certain days.  Here we had some language difficulties as the lady told us to sit at a table but then no one came to get our order.  It was quite hot and humid and we sat there for maybe 30 minutes.  Luckily next to us was a food tour guide who recognized that we weren’t getting served and asked one of the proprietors and ordered both juice and some food for us. 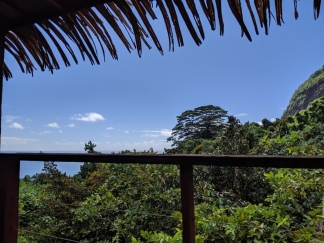 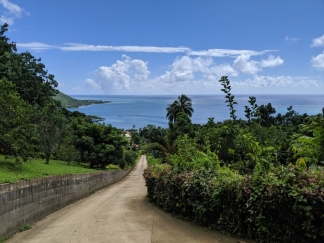 Once the food/juice came, it was delightful.  The plate was a smorgasborg of local fair.  What I probably hate the most is being hot and sticky.  I deal with the dry heat we have here in Sacramento (plus lots of access to AC).  However there was nowhere to escape in various parts of French Polynesia and over the trip we found ourselves having to wait either outside or in non-AC areas and that was probably the worst part of the vacation.

Since the island was tiny, we made it back to our hotel after lunch and then just relaxed by the pool for the remainder of the day. 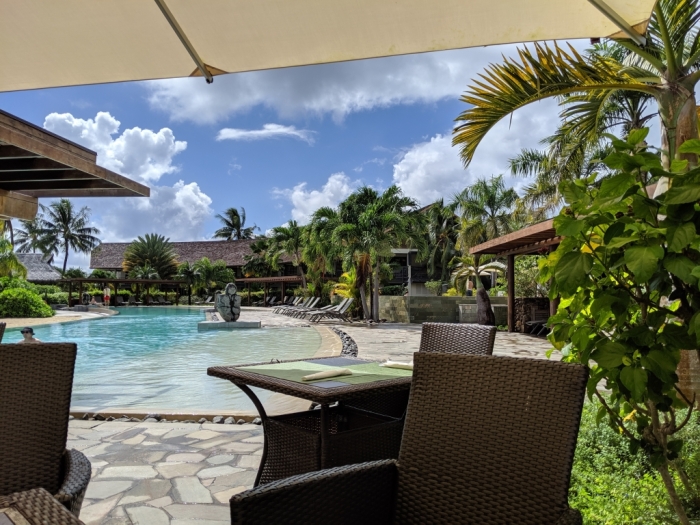 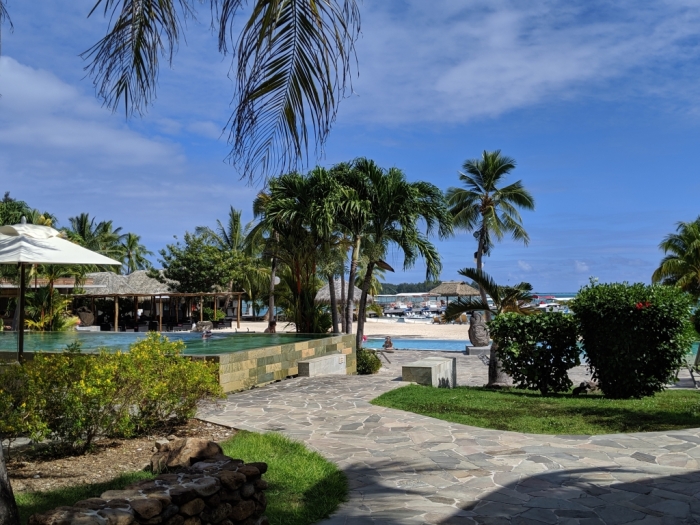 Saturdays at the Intercontinental are their theme night dinners.  The Saturday dinner theme was a traditional fishing village.  This did require that we put our names down the previous day to get a table.  They spent most of the afternoon setting up tables on their little beach (the “stage” was the pools that we were hanging out in as well as the concrete around the pools.  The dinner was a big buffet of various things such as meats, seafood, sushi, cold bar (salad, cheese, charcuterie), and a dessert bar.  Overall the food was nice and plenty.  The entertainment consisted of various Polynesian dancing as well as fire dancing.

We had decided to forego seeing Belevedere Point the previous afternoon since it was so hot and so after breakfast we drove over to check out this scenic point.  Apparently from this viewpoint you could continue on some hikes further inland but we just wanted to see the views. 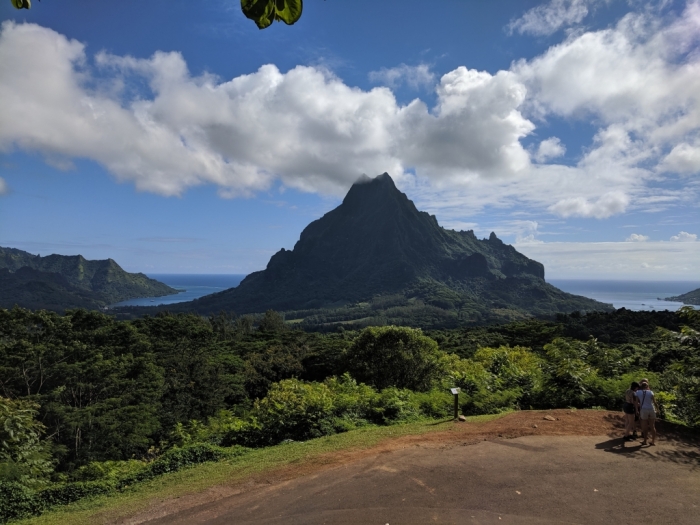 We stopped at a small local shop to buy some water and check out what they had stocked.  There were some interesting chips.  I picked up one called Twisties: Roast Chicken Dance.  I found out that it isn’t actual chicken but the seasoning they often use for cooking chicken.  It tasted like Ramen seasoning.

We tried to do some more snorkeling in the lagoon area but changed our mind.  I had yet to try any of the water toys (they give each guest a free hour).  I convinced D to do a two person kayak.  Luckily it was overcast, which is nice that we didn’t have to worry as much about sunburns and the hot sun rays weren’t boring down on us.  We paddled around for about 45 minutes and stopped along the way to get in the over water hammock. 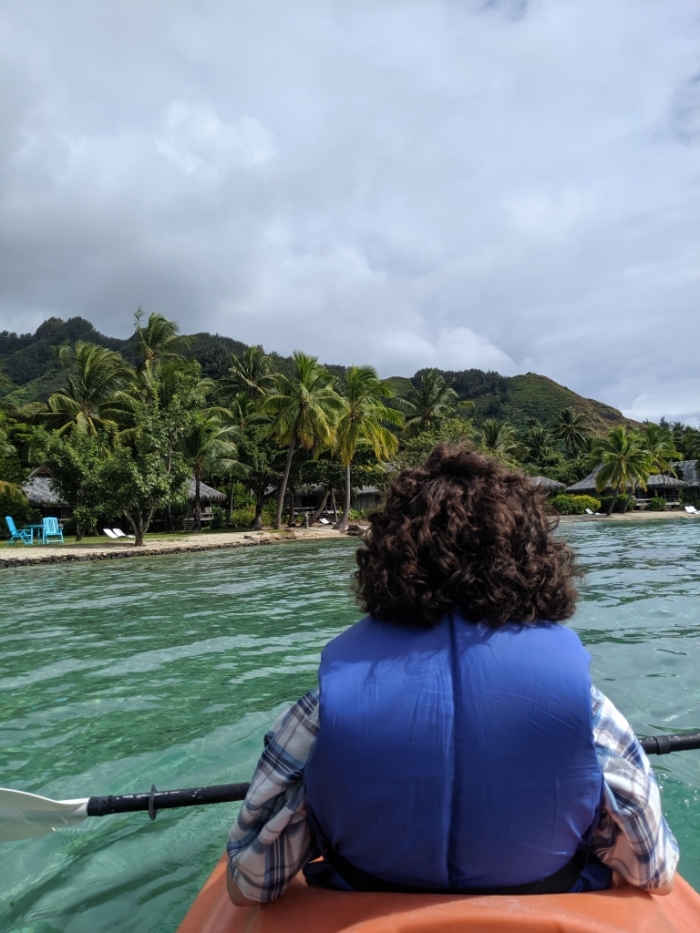 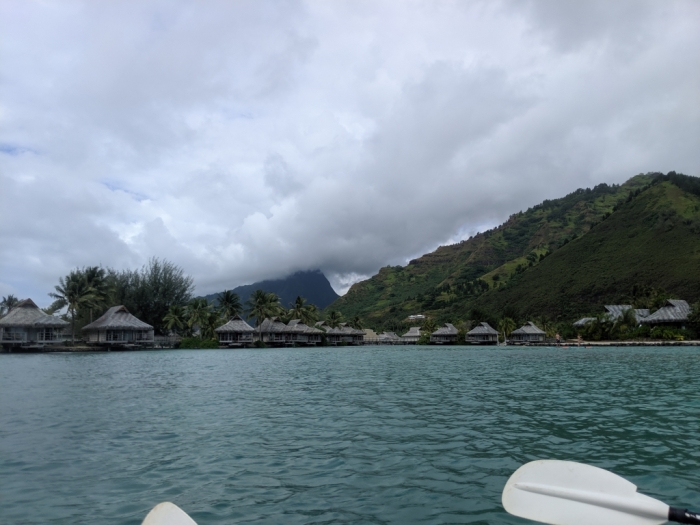 We had some food again at the poolside bar and then just relaxed the rest of the day (reading by the pool).  We had one final meal at the hotel that evening. 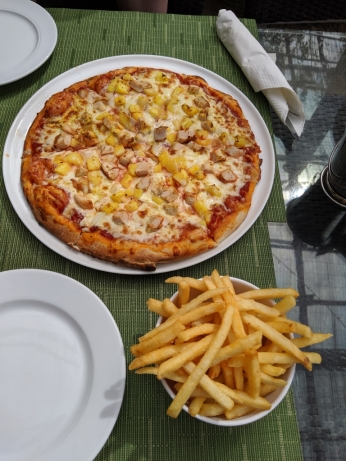 The next morning we had a transfer to the Moorea airport in the afternoon.  Unfortunately we had to check out by 11, which again left us to hang out in limbo.  After checking out we just sat and waited in the lobby area but not before getting one more cocktail.

Here are some shots from the bus ride to the airport: