So, somehow my entire post did not save and I lost a fully completed post.  I’ll re-write it but suspect it won’t be close to the same.  In my frustration, I may also shorten it and just throw in a bunch of pictures.

My parents wanted to take D and I on a vacation this year and we eventually settled on a cruise to Iceland.  My parents are world travelers and we wanted to find somewhere they haven’t been so the options of places that we wanted to see and they haven’t been were limited.  My parents are also pretty big cruiser takers and they suggested a 2 week cruise.  I have had some experience with cruises, having been on 6 different ones to various places (Alaska, Hawaii, Caribbean, Mexico) and various cruise lines (Carnival, Princess, NCL).  All the previous cruises I’ve been on were 7 days or less so a 2 week cruise was new to me.  Also we would be cruising with Holland America, which is known for an older demographic (think retirees).  D had never been on a cruise so this was going to be her first experience.

Our itinerary would start in Amsterdam and take us to Scotland (2 ports), Iceland (3 ports) and Norway (2 ports) before returning to Amsterdam.  We decided to stay a few extra days in Amsterdam since D hadn’t been there before either.  To not be too rushed/stressed about making sure we arrived in time to board the boat, we decided to head to the Netherlands a day early.  We had one connecting stop in Seattle and I managed to get a decent shot of Mt. Rainier (I think it was Mt. Rainier).

Our flight from Seattle to Amsterdam was smooth enough though I was stuck in a middle economy seat so wasn’t the most comfortable.  I was glad they had individual monitors and I was able to watch a bunch of movies since I couldn’t sleep that well.  On arrival, my mom surprised us by actually waiting outside of customs and accompanying us to our hotel for the night (Hyatt Place Airport – actually in a nearby town called Hoofdorp).  After getting checked in and taking a quick nap, we walked over to Hoofdorp to get some dinner.  We managed to find a Chinese restaurant (which is a cuisine I know my parents are comfortable with and I figured that we wouldn’t have much opportunity for Chinese food while on the cruise).

The walk through town also revealed a quaint little main street area with shops and restaurants.  The houses were also quite cute.

I woke up early the next morning and decided to head to the 24/7 gym that the hotel had.  At first I was the only one in there running on the treadmill and then halfway through my run was joined by another guy who hopped on one of the stationary bikes.

We then caught an uber (my parents called it and apparently they use it frequently – we have not used any of the ride-sharing services in the past.  I have been in one but didn’t order it).  The uber/taxi driver said that in the Netherlands, you need to be an official taxi driver to be an Uber.  The funny thing is that our trip cost a lot less than if we had called his taxi service and ordered one from them.  We arrived at the cruise port and had to wait a little bit before we checked in and obtained our cruise card.  This card was your room key and also used to identification when disembarking and re-embarking on the boat.  It also acted as your credit card onboard and you could pay for services/products on the boat with it.  Since my parents are regular cruise participants with Holland America, they upgraded one of the staterooms to a handicap room (these are generally larger to accommodate the need for wheelchairs/etc).  My parents let us take this room and took the regular room nextdoor. 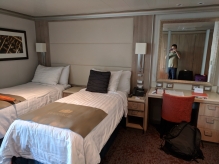 I especially liked the fact that we had a verandah  (a good sized one too), which I made use of throughout our trip.

The ship was a cruise ship.  I feel like most of them are fairly similar these days.  Our ship is one of the newest (maybe the newest) in their lineup.

I didn’t learn until later when we took a canal cruise that where our cruise ship was docked in Amsterdam was actually a river and not part of the ocean.  It made more sense when we had to stop at a lock on our way out of Amsterdam to Scotland.

We had a full sea day ahead of us.  Room service was complimentary so we decided it try it out that first morning.  Overall I liked it except the scrambled eggs were too watery and underdone.  I would later try their omelets and they were much better.

We also tried their burger/hot dog joint called Dive-In.  Some reviews had said this was akin to some of the good burger joints such as In-N-Out.  I wouldn’t go that far but it was a decent burger.  The fries were something to be desired though and a little too soft for my taste.

That afternoon we attended a talk by one of the cruise personnel about things to do in Edinburgh (this became a recurring theme before each port).  The talk was in the World Stage, where they held other shows and performances each night.

That afternoon we attended a talk by one of the cruise personnel about things to do in Edinburgh (this became a recurring theme before each port).  The talk was in the World Stage, where they held other shows and performances each night.