We woke up and got ready a little later (we were on vacation after all) and by the time we reached South Queensferry, it was already later morning.  You had 3 main options to get into Edinburgh: bus/shuttle, taxi, and train.  The train ride required a bit of a hike up a hill to get to the station.  That first day we decided to take the bus into town, which took about 25 minutes.  The weather was overcast with some light sprinkling.

The bus dropped us off at St. Andrew Square in the New Town.  From there I figured that we would make our way into the Old Town and could start at the Palace of Holyrood house at one end of the Royal Mile and make our way to Edinburgh Castle at the other end. 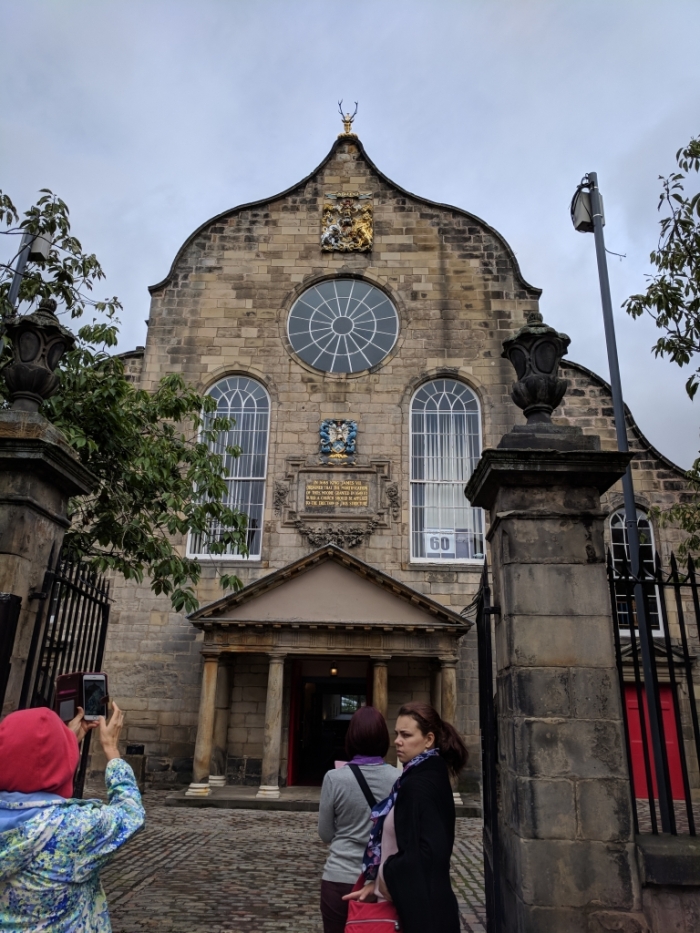 Holyrood House I learned is where the Queen (Elizabeth II) stays when she visits Scotland.  No pictures were allowed inside so I have some pics from outside the Palace.  The inside had some neat architecture along with some cool furniture.

Within the Old Town there are a lot of closes.  These are essentially alleyways that often have some gardens – some decent size – of which many are public and people sneak into them to sit or have a quick meal.   We ducked into a few to check them out.

Since we had arrived a little later in the day, our tummies were grumbling for food and we ended up choosing a pub to have some lunch.  I finally was able to try some haggis at the Whiski Bar & Restaurant.  I also tried a local beer called Innis & Gunn. 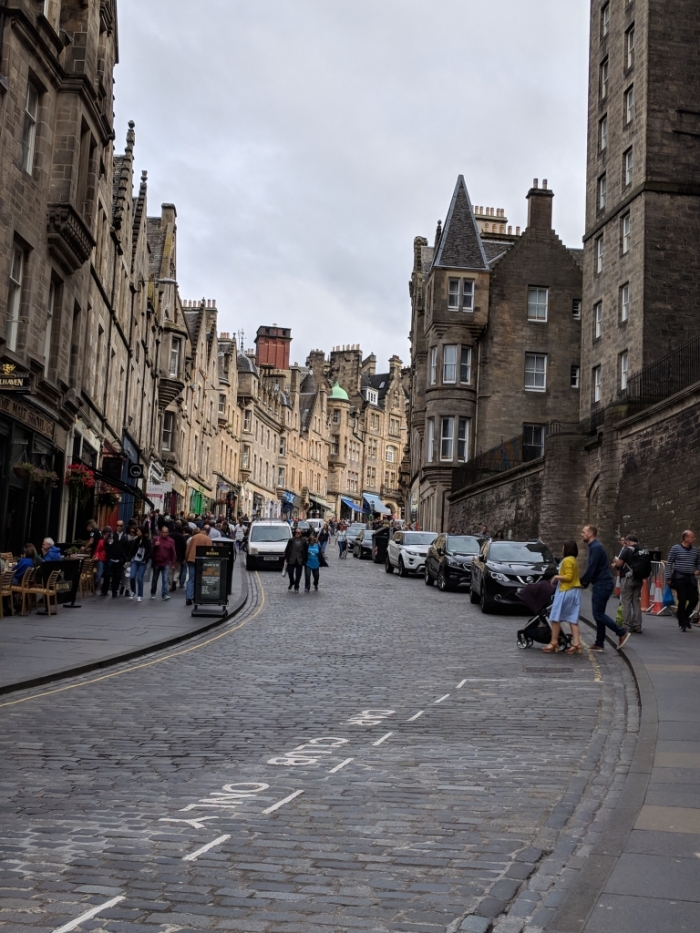 We had last-minute decided to attend the Edinburgh Royal Military Tattoo (I had no idea what this was until we arrived in Scotland) through the cruise ship so walked around a little more on the Royal Mile and then headed back to the ship to prepare to come back to Edinburgh Castle (kinda silly that we couldn’t just meet them at the event since we were already there).  The Tattoo is a demonstration (music, dancing, etc) from various countries all over the world.  I guess this is actually something that happens in many countries but not something I was familiar with here in the States.  This particular one happens once a year for a few weeks and happenstance had us in town for it.  Everyone said it was one of those things that you “just had to do” if you were in town.  The tattoo didn’t start until later in the evening so it was going to make for a very late night.  I was quite impressed with the various performances.  There was a group from switzerland called “Top Secret” that did an amazing job as a drumline.

We didn’t end up getting back to the ship and in bed until somewhere between 1-2 am (a very late night for us since we are used to going to bed relatively early).

We woke up the next morning and my parents were just going to hang out in South Queensferry.  D and I decided to make the hike up to the train and take that into Edinburgh.  We didn’t have any big plans but wanted to check out the inside of Edinburgh Castle.  Unfortunately we didn’t know that you had to purchase tickets in advance as by the time we arrived they had announced it was sold out.  So we just wandered around Old Town in the off and on rain.

We had watched a show called Brewdog that was on the now defunct Esquire network.  The 2 owners/brewers from the Scottish craft beer company Brewdog traveled around the US creating a specialty brew.  Since we were heading to Scotland, one of the things I wanted to do was try one of their beers.  I now learned they actually have a brewery along with a hotel (that just opened) in Columbus, OH.  They had a few breweries in Edinburgh so we wandered on over and had a beer.

I also wanted to try a Scotch pie.  It was festival season in Scotland and they had the Fringe Festival going on so there were a lot of people walking the streets.  We found the Piemaker (it was a little off the main path of the festival so it wasn’t as crazy).

I tried the traditional meat pie and D had one with chicken.  It was delicious.  I could have eaten 2-3 more. 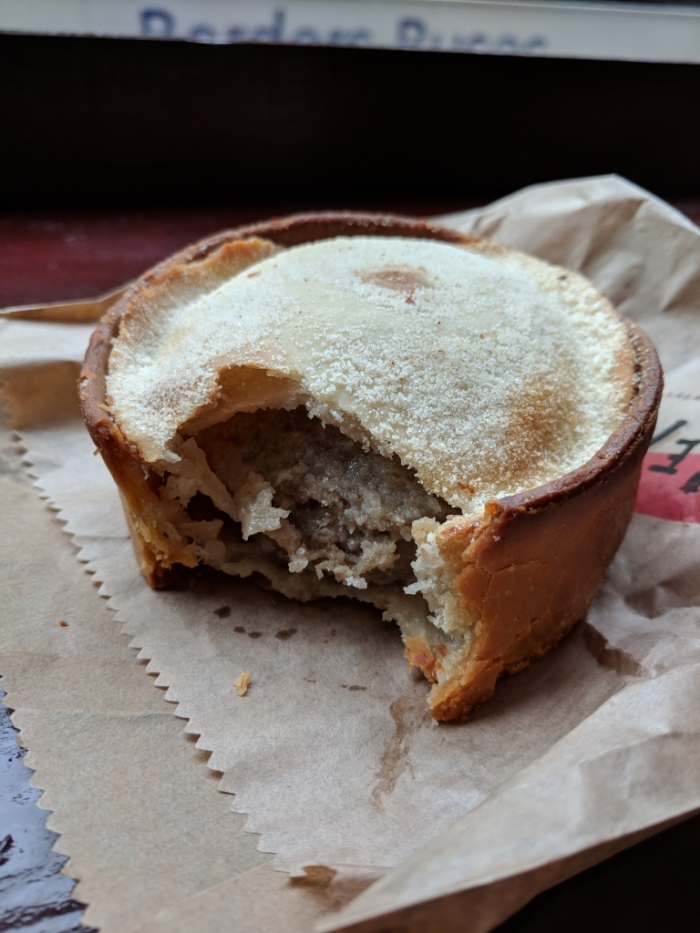 We then walked around some more and down the Scotsman steps, which I thought were cool with the variously colored steps.

This led us to the Halfway House, which I had read was the smallest pub in Edinburgh.  It was pretty tiny.  I tried some bangers and mash and some Speyside scotch.  Had to try the traditional bangers & mash.  Their sausage had an interesting flavor to it. 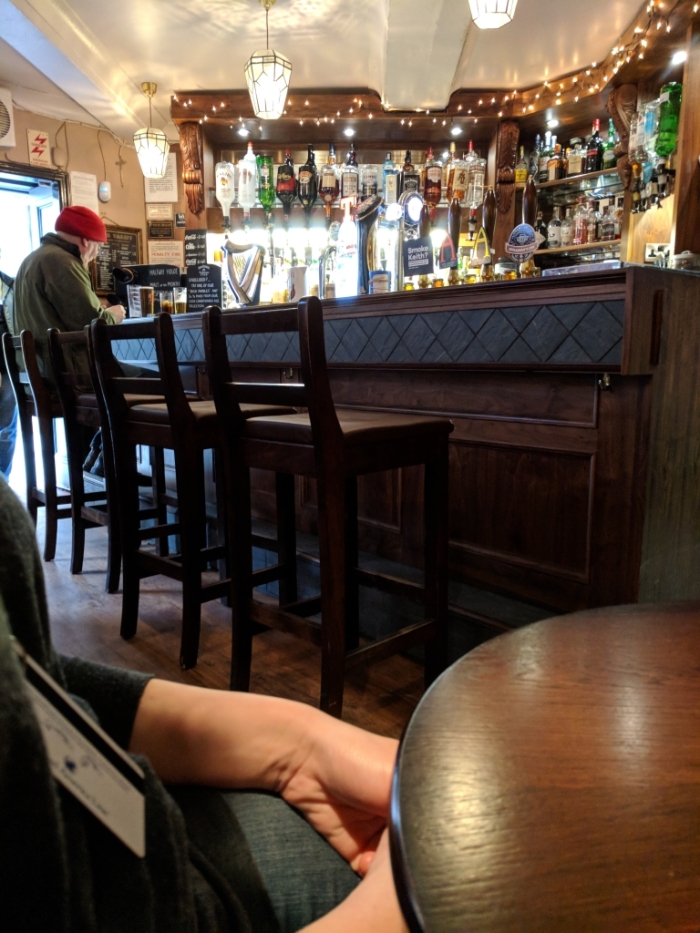 Since we were heading out that early evening for our next port, we hopped back on the train back to South Queensferry and our boat.  Next stop was Invergordon, Scotland!