Last Sunday I completed by 19th half marathon.  It was the 21st running of the Surf City Marathon/Half Marathon in Huntington Beach, CA.  I grew up about 20 minutes from HB and so this was kind of a homecoming race.

I had originally signed up for the full marathon last year.  Currently my overall long-term running plans are to complete a full marathon every other year (to hopefully give my body time to recover and just  not tax myself too much given my history of injuries).  I had been contemplating between Surf City and the Carlsbad Marathon.  Eventually I settled on Surf City and my good friend KP was thinking of doing it as well (though in the end she couldn’t due to scheduling conflicts).  I was excited about the race and the course didn’t seem too bad.  One gripe I read about the full distance was that there was a lot of “looping” back and forth along PCH and the ocean.  So it could be a little disheartening because you see the people that are a few miles ahead of you and realize you still have a ways to go.

The Big Sur Marathon lottery came a few months after I signed up for Surf City.  I thought “why not sign up for the first timer/bucket list lottery and see what happens?”  Sure enough, I received the email that I made it in and could register for 2017.  So I did.  Now I had a decision to make.  Surf City was on February 5 and Big Sur is on April 30.  With such a short time between races I knew that I shouldn’t try to do 2 full marathons in such a short time (see above about me being injury prone).  I made the decision to drop to the half marathon for Surf City.

The race expo was set up in a large tent on one of the parking lots along the beach southeast of the pier.  The organization for the bib and t-shirt pickup was well done.  You had to know your bib number ahead of time because within the front of the tent, they had lines with a certain interval of number (1-1000, 1001-2000, etc).  And then they had a separate area with lines based on your shirt size.  So I was able to pickup my bib and shirt and tote bag within just a few minutes of arriving.  This was good because I only had a few minutes to check out the expo as we were heading to meet friends for lunch. 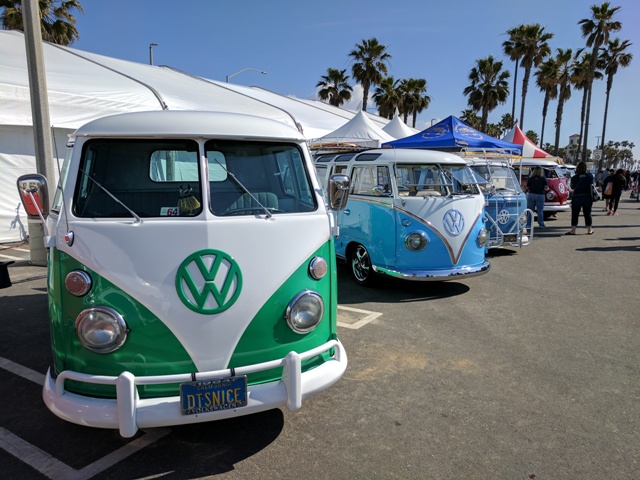 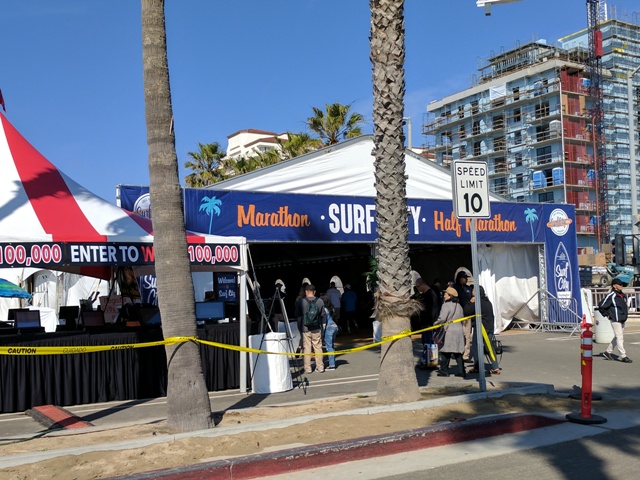 The rest of the expo was similar to most large races.  There were quite a few vendors offering some samples as well as other booths that were selling various running gear, most at a discount – as is usual at race expos.  The one different thing at this expo was that there was a large amount of race merchandise not running related.  They had mugs with the run surf city logo and some other things that I don’t normally see at race expos.  Overall I picked up a few samples of Larabars and some other granola type bar.  Expo day was what you imagine as your prototypical California day.  Blue skies, sunny, semi-warm.

I didn’t get a picture of my pre-race meal but we had pizza.  That is always my go to before a race.  Since we were staying at my folk’s house, we picked up some good pies from a local pizza joint that I’ve had previously called Ameci’s pizza and pasta.  We enjoyed the meal with one of my sisters and her husband and 3 kiddos.  It was a nice fun night and I was able to go to bed early (9:30 pm).

Race morning started off early for me as usual.  Since there is not a ton of parking around PCH and Huntington, I elected to just park at the Civic Center and take the free shuttle to the race start area (~2.5 miles).  I toyed with the idea of parking and walking that 2.5 miles but decided I could be patient and take the shuttle.  Luckily about 2-3 minutes after I boarded one of the yellow school buses, we were off and to the start area about 15 minutes later. 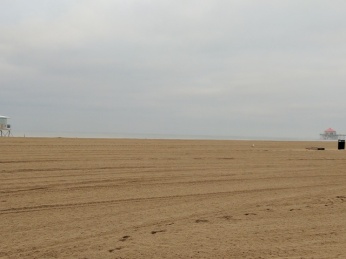 The start area had porta-potties lined along the boardwalk.  I walked around the expo tent area and then went to use the facilities.  The full marathon started at 6:30 AM and the half marathon didn’t start until 7:45 AM.  They had a wave start that was separated by about 2-3 minutes each.  I had predicted a slower time (~2:10) so was in the 5th or 6th wave.  About 10 minutes before 7:45, we all crowded up and lined up. 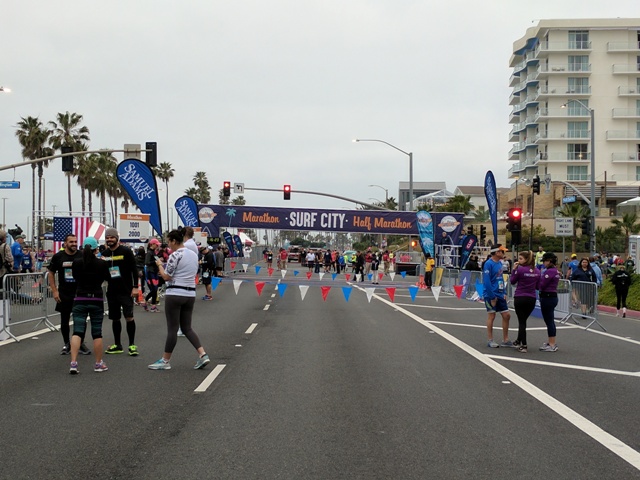 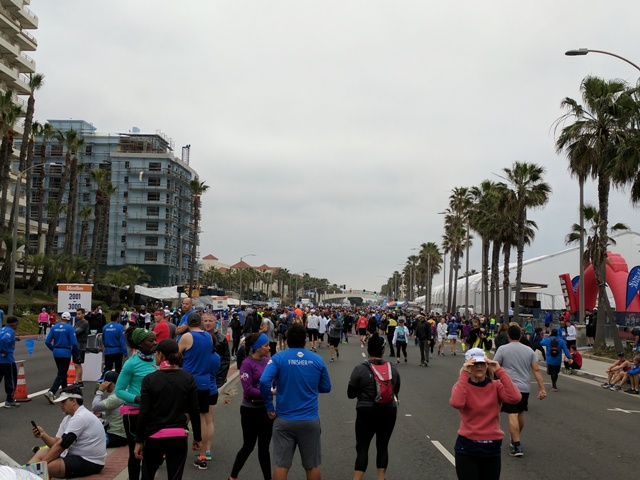 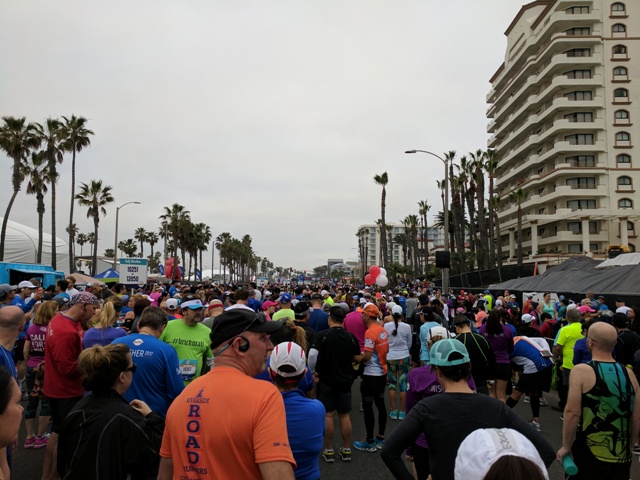 A previous mayor and current city council member of HB sang the national anthem and I must say she did a fabulous job.  And then we were off…Except not.  The wave starts definitely made me antsy.  I don’t think I actually crossed the start line until about 8:03 AM or so.  By this time I had to pee again.  Ooops!  I told myself I’d made it through the first few aid stations (where the porta-potties are) and then stop somewhere to pee.

Much of the half marathon course runs along the Pacific Coast Highway (PCH aka Hwy 1).  The first 2.5 miles took us north on PCH and then we made a right on Seapoint street.  PCH is relatively flat but the right turn on Seapoint immediately took us onto a gentle long incline into some neighborhoods. We continued and made a loop in the neighborhood (miles 3-5.5).   On the return trip of the loop, it was mostly downhill which was nice.  The first few miles of the race I was lagging and going much slower than normal.  My Garmin tells me that my paces for the first 4 miles were: 10:47, 10:31, 10:35, and 10:45.

After making our way down from Seapoint, we turned north again on PCH and this took us along the Bolsa Chica Ecological Reserve on our right and Bolsa Chica beach on our left.  I’ve been to both places previously.  You can walk along these wooden boards in the Ecological reserve and see the wildlife (lots of birds).

As a kid and through high school we went to Bolsa Chica to do bonfires and just  hang out.  I finally stopped somewhere in the 7-8  mile area to pee and this slowed me down a little bit.  Shortly after the 8 mile mark we made a U-turn on PCH and started to head back towards HB.  Just before mile 9 was the CLIF Shot energy zone.  Here they were handing out some Clif gels which I managed to get a few Mocha ones.  I hadn’t brought any energy gels with me so it was a nice time to get one and take one. 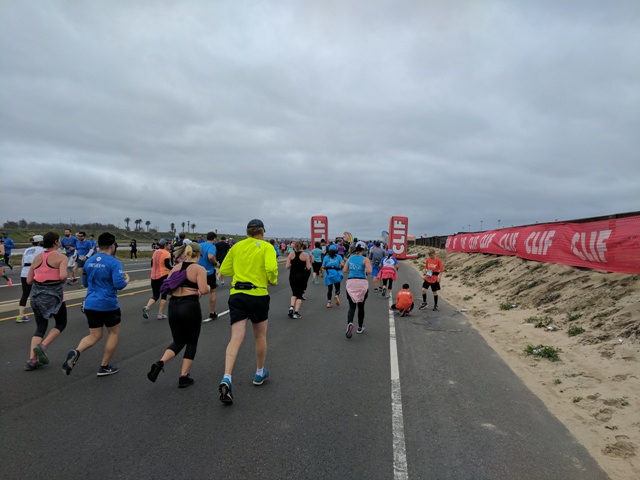 It was a straight shot down PCH from mile 9-13.1.  As we got closer back to Huntington Beach, I could see the full marathoners heading north on the boardwalk.  At this time I was glad that I had dropped to the half marathon because I can only imagine how disheartening it can be to watch the half marathoners heading to the home stretch while you’re still running in the opposite direction.  While I don’t think it is the worst thing, especially given the views of the crashing waves while you’re at it, I was glad that I wasn’t doing it.  They also don’t shut down the boardwalk so the runners have to weave their way around bicyclists and other tourists. 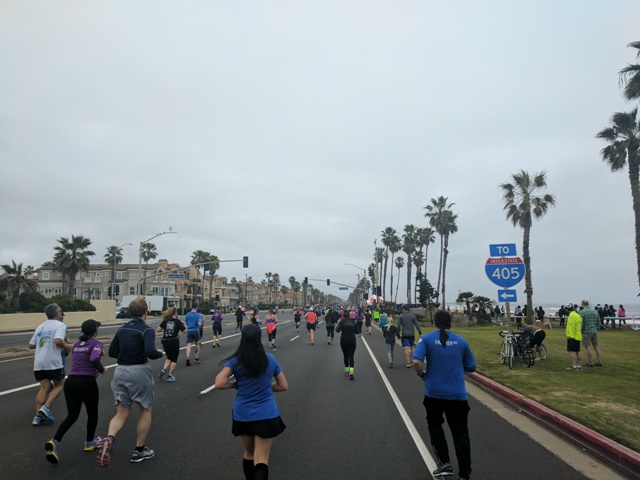 I didn’t do a sprint to the finish since this was more a training race than anything and ran it in at my normal pace.  I felt really good overall after finishing.  I picked up my massive medal, water, chocolate milk, banana, Bai, protein bar.

Initially I was going to get my complimentary beer but the line to the beer garden was super long and I didn’t feel like sticking around so instead walked out on the sand and beach. 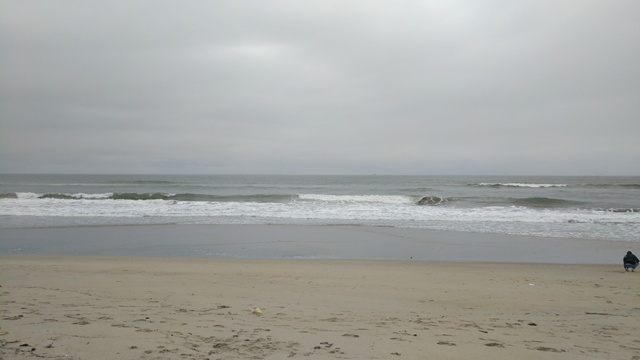 There were a few special things about this race.  It was my 19th half marathon and essentially from my childhood hometown.  I suspect that my marathon training helped me accomplish the race with more ease than I am used to.  I’m satisfied with my race time. 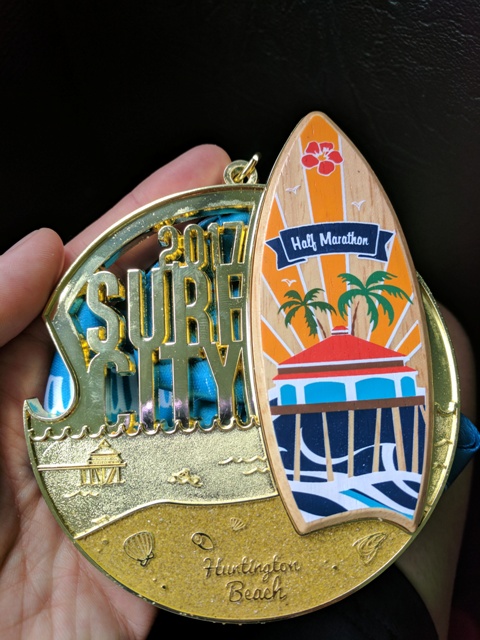 One thought on “2017 Surf City Half Marathon race recap”