With our NYC vacation coming to an end, we had a rough outline of what we wanted to do before heading to JFK and flying back to Sacramento.  We had to check out of our hotel by noon so by 11 or so we checked out of the room and the hotel was kind enough to store our bags until we left for the airport that afternoon.

Our first stop was for food since we hadn’t had breakfast.  I figured since we wanted to check out the High Line, we would look for a brunch spot near there.  Many of our friends had told us that we had to “brunch” while in NYC so figured this was our last chance.

I found a place called Cookshop.  I thought it was funny that the brief description on Google maps said “Farm-to-hipster American dining.”  At first that made me not want to go there but it had some good reviews on the food and that really was all I cared about.  D started with the Beignets and then had the Poached Eggs (with beefsteak tomatoes, basil, herbed breadcrumbs, and cheese fonduta).  I started with the House smoked Arctic Char (with horseradish creme fraiche and toast) and then had their Fried Egg Sandwich.  The Beignets were good, though not the traditional light airy ones that you think of.  They have ricotta cheese inside their batter and made the internal part of the beignets more cake-like than airy.  Overall the food was great.

Not too long after we ordered, there were two young women sat right next to us.  Now they were not quiet nor shy about their conversation.  From the conversation I gleaned that they were most likely towards the end of high school (suspect senior year) but they lived a fairly privileged life.  One girl talked about how she spent the summer traveling through Europe and the other through Africa.  What struck me as outrageous was one girl talking about how she was dating a boy but was very attracted to another guy on her trip and was proud of herself that she didn’t cheat on the boy she was dating.  And I quote, “I didn’t kiss him, though I did shower  with him.” um…WHAT?!? The conversation was filled with ridiculous things like that and distracted me from a nice brunch.  Kids these days…

After lunch, we trekked over to the High Line.  The High Line is essentially an old elevated railroad track that was converted into an elevated urban park walkway.  Honestly, coming from Sacramento and the City of Trees, it wasn’t all that impressive to me.  I can see how it is a nice getaway from the concrete and skyscrapers of NYC though.  So I can appreciate it as a nice thing for people who live in NYC.  However, the High Line is now a touristy thing that it was fairly congested and filled with tourists (like us).  It was also a bit warm being elevated and not having much shade. 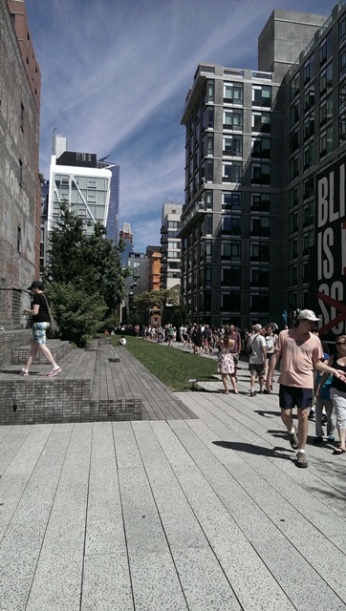 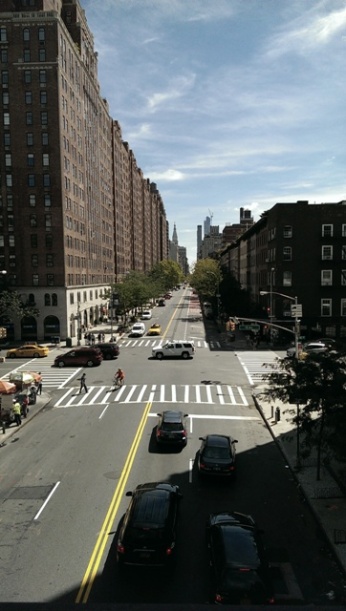 One thing that D wanted to see was the old cobblestones of New York.  I told her that one place you can still see it is the Meat Packing District.  We got off the High Line and found ourselves in Meat Packing and D got to see the cobblestones.

I needed to use the facilities and so while D was browsing in a store, I walked over to Chelsea Market.  Now I thought the High Line was packed with people walking, but Chelsea Market was even more packed.  I felt like a sardine.  We grabbed some water here and then jumped on the subway back up to Columbus Circle (at the southwest corner of Central Park).  We also used the bathrooms at the Essex Hotel so got to see the nice architecture in the lobby and registration area.  We then just chilled on a big rock in Central Park until it was time to head back to the hotel and head for the airport.

It’s a good thing we decided to head to JFK early because there was a ton of traffic on the roads back tot he airport.  Luckily we were able to get there with plenty of time to grab some food.  Course it helped that our flight ended up being delayed because the co-pilot wasn’t at the airport in time.  You would think as your job you’d try to get to the airport on time or early (it was an evening flight).  The gate people came on once saying that the co-pilot was in a cab, that some people commute to work.  Um, unless you work at home, everyone commutes to work, and plans as such.  We ended up arriving home a half hour after our normal scheduled time.

That’s a wrap on our NYC trip, overall was a good time.  Definitely left more stuff to do so maybe one day we’ll head back.