With our late night, we slept in and didn’t get out of bed until around 10 am.  Our only real set plan was that we wanted to have some lunch at Katz’s Delicatessen.  Since this is located in the LES, I suggested we go down to Battery Park so D could see the Statue of Liberty (at least from afar) and also I wanted to see the 9/11 memorial and the Freedom Tower (One World Trade Center).

We made it down to Battery Park, saw the Statue of Liberty from afar (it is actually quite small when you see it from Battery Park).  My phone’s camera isn’t all that great (as you’ve been with the purple hued pictures) so I didn’t get a good picture of Lady Liberty.  We then walked northward and found ourselves at site of the previous WTC (Towers 1 and 2) and the new 1WTC.

The last time I was there (2008), there was a ton of construction still going on and only one of the waterfalls had been partially constructed.  It looked completely different this time.  It was definitely a bit eerie and haunting to see all the names surrounding the waterfalls.  The juxtaposition of thousands of tourists taking pictures and such was a little strange, though at least it seemed like most people were somber and understanding of the atmosphere. 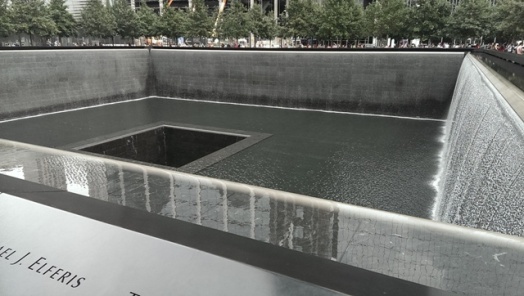 We didn’t actually go into the museum or buildings around and headed towards lunch.  We hopped on the subway towards Katz’s.  About this time the weather turned from blue skies to overcast and rain.  We hoofed it to Katz’s just in time before the rain started to really come down.  Upon entering Katz’s, the guy at the door hands each person a ticket.  This ticket is what the counter guys write on and you have to hand the ticket to the checkout person before leaving (otherwise you have to pay $50).  The place was packed and there were 7 different counter lines.  I thought it was cool that when you order, they give you a cut of sample while they’re making the sandwich.  We ordered the pastrami sandwich and Matzo Ball Soup to share.

The sandwich was really tasty.  The Matzo ball soup was also good.  The taste of the broth reminded me of a chinese soup I used to eat growing up.  The rain continued though seemed to be lightening up.  About a block away is Russ and Daughters.  We decided to check it out and get some dessert.  Russ and Daughters is a quintessential shop that I think of that New Yorkers can grab some easy grub.  We just had a black and white cookie.

We had discussed seeing a show (musical, tv taping, something) and so headed to the TKTS Discount booth in Times Square to see about getting some half off musical tickets for that same night.  There was a bit of a line but it moved swiftly.  Times Square was packed with tourists.  Next to the ticket booth there was also a rally/protest going on for Venezuela.  From the list of musicals we elected for Beautiful: A Carole King Musical.  We both really like her as a songwriter and artist.

As we had some time to kill, we decided to hit up some stores.  There were a few on D’s list that are only in NYC.  We checked out Uniqlo, they are sponsors for both Novak Djokovic and Kei Nishikori, both players are in the semi-finals of the US Open currently.  I bet Uniqlo would love if they faced off in the finals as that would give them great exposure.  We also checked out Aritzia and Cos on our way towards the Stephen Sondheim Theatre.  We grabbed a couple of slices at Little Italy, and this time it was more what I remembered as the classic NY slice.

The Carole King Musical was pretty fantastic.  There were multiple instances where I got goosebumps and chills from the great singing.

After the show, we took the subway down to Union Square and walked over to Baohaus.  I wanted to support a fellow Taiwanese and have been a fan of Eddie Huang for awhile.  We each had a Bao, I had the traditional pork one and D had the fried chicken bao.  D saw they had Taro Fries and she’s a big fan of Taro so we had that as well.  I had a HeySong Sarsaparilla Drink, which brought me back to my childhood.  D had the Lang Lang, which was 1/2 lemonade and 1/2 green tea.

They had the tiniest bathroom ever but had an awesome funny sign.

Our next food stop was the Momofuku Noodle Bar.  Surprisingly there was no wait and we were seated right away at the counter.  This was cool because they have an open kitchen and I was able to watch all the action.  As a foodie and amateur home cook/baker, it was fun to watch them do their thing.  We shared the Shiitake buns, which were quite umami and tasty.  I had the Chicken Pho and D had the Hozon Ramen.  Both were awesome.

With our tummies filled, I wanted to check out NoMad bar.  There was a very nondescript door that led into a nice dark busy bar.  I had no idea it was actually part of a hotel as the separate entrance and dark hallways belied its true nature.  The waiter was very knowledgeable and because of their extensive menu he gave me some good suggestions.  I had the Gentleman Exchange and D had the Sakura Maru.  She said it was the best cocktail she has had and we left after one drink otherwise she would have just kept on drinking more and more.  While waiting for the subway to take us back up to the hotel, we saw a real NYC rat on the tracks.  Our NYC trip was made by seeing the rat.