On today’s 5.5 miler, I ran into a rafter (yes I had to look that up) of turkeys.  Apparently some people will refer to  a group of turkeys as a “gobble” or a “flock.”  I like rafter.  That’s a neat term.  Anyway, we have a ton of turkeys in the greater Sacramento area and there are usually multiple different rafters that I run into on my travels along the American River (and also sometimes in the residential neighborhoods surrounding it).  I was near the Guy West Bridge again by Sac State when I at first spotted 2 turkeys coming from the river to the berm.  As I approached them, more turkeys started showing up and they kind of surrounded me on the berm’s paved trail.  I know sometimes turkeys get a bit aggressive so I snapped off a few pics and kept going. 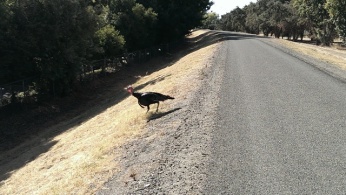 Last year I invested in a bicycle, my first bike that I purchased on my own.  I have intermittently biked over the last 12 years or so since finishing college.  During grad school I biked to work/class/lab on a regular basis.  The bike I purchased was the 2014/2015 Giant Roam 2.  My intent was to use the bike for general biking as well potentially some longer distance rides (for me, longer distance is like 10-20 miles).  I went to my LBS (Local Bike Shop) and they helped me out.  I did feel like the guy helping me maybe wasn’t as helpful as I was expecting from an LBS.  People always talk about with bikes that it should be a dialogue between you and the bike pro about what you need and they also help fit the bike to you.  I realize now he maybe wasn’t as helpful because D recently bought a bike at the same shop and a different bike pro helped her and was much more informative.  Admittedly I didn’t ride much over the last year.  Now that D has a bike, I know we’ll be doing more rides together.

I’m always interested in how things work as well as DIY.  So now armed with two bikes, I am learning and reading up on how to do regular bike maintenance myself.  I went to the library yesterday and checked out Zinn & the Art of Road Bike Maintenance.  The plan is to learn how to do basic bike maintenance to keep our bikes running well and maybe even do some more advanced stuff, we’ll see.

So that’s a new hobby of mine.   Plus it has the added benefit of providing some health perks.

A few things about NYC that I forgot.  We saw one celebrity and one pseudo-celebrity.  While on our way to the Beautiful show, a double-decker tourist bus was rolling slowly down the street with music blaring from it.  When I looked up, I could see a film crew on the top deck and some guy standing and dancing, with a bunch of other people sitting and dancing.  Every few minutes, the guy on the bus would shout to all the pedestrians walking “What’s up New YOOOORK!?!?”  Someone walking near us pointed out that the person was Jason Derulo.  That was the celebrity.

The pseudo-celebrity that we saw is/was on the show  Million Dollar Listing: New York.  Ronita is the assistant to one of the realtors (Luis) on the show and she’s featured in a lot of the episodes because that is the only assistant he has working for him.  She basically organizes and runs his life from what the show depicts.  Anyway, we were just walking along near Grand Central when she walked by us (we were walking on opposite directions).  After she passed, I turned to D and said “she looks familiar!” and then I said “that was Ronita” from the show.