Last weekend I ran the Shamrock’n half marathon here in town.  I had previously done this race 5 years ago and actually PRed it with my only sub-2.  I hadn’t even done much speed work and somehow just mentally pushed myself to a sub-2.   This year I had no time goal and just wanted to run a decent race.

The night before the race I had my usual pizza pre-race meal.  Initially we were going to eat at Federalist Public House, but it was packed and so we ended up just getting the pizzas to go.  Race morning came early as per my usual.  I hadn’t realized that this race fell on daylight savings time until the week before the race.  So with the “spring forward,” I was getting one less hour of sleep than usual.  I didn’t sleep quite as well because of anxiety of the time change but probably managed a decent 5.5-6 hours probably, which is a lot better than when I first started doing races.

In the last 5 years, technology has really taken off and this year for parking you had the option of reserving a spot in one of the local parking garages/lots before race day.  On the web site they didn’t list the parking structure I previously parked in that wasn’t too far from the race start/finish.  I made the decision to park in Old Sacramento, which was about a 3/4 mile walk to the race start.  I chose that lot because it meant not having to take the freeway and also I was hoping to avoid traffic and it was a success.  The trek from the parking lot to Raley Field and the race start took me across the Tower Bridge.

The morning was shaping up to a beautiful day though I did see that fog was going to be present for a decent part of the early morning.  I didn’t really mind it though it did obscure the view of the river for much of the race as we ran along the bike trail.  One thing I remember from the last time I ran this race was that they had a good amount of porta-potties.  As I tend to need them multiple times before a race, I was quite appreciative of this fact.  I never had to wait in line for one, which is unheard of in races.

The start of the race takes place just outside of the Raley Field, home of the minor league River Cats.

They instituted a wave start to try to alleviate congestion on the course (much of the race takes place on a narrow two lane bike trail) and I was in the 2nd wave.  The waves were separated by 15 minutes so I didn’t start until 8 am.  This was nice because it meant I could sleep in a little more than usual and also gave me more time at the start.  They had a gear check (you actually picked up the bag there and they took your warm clothes, etc).

Right after you start the race, you cross the Tower Bridge into Old Town Sacramento. 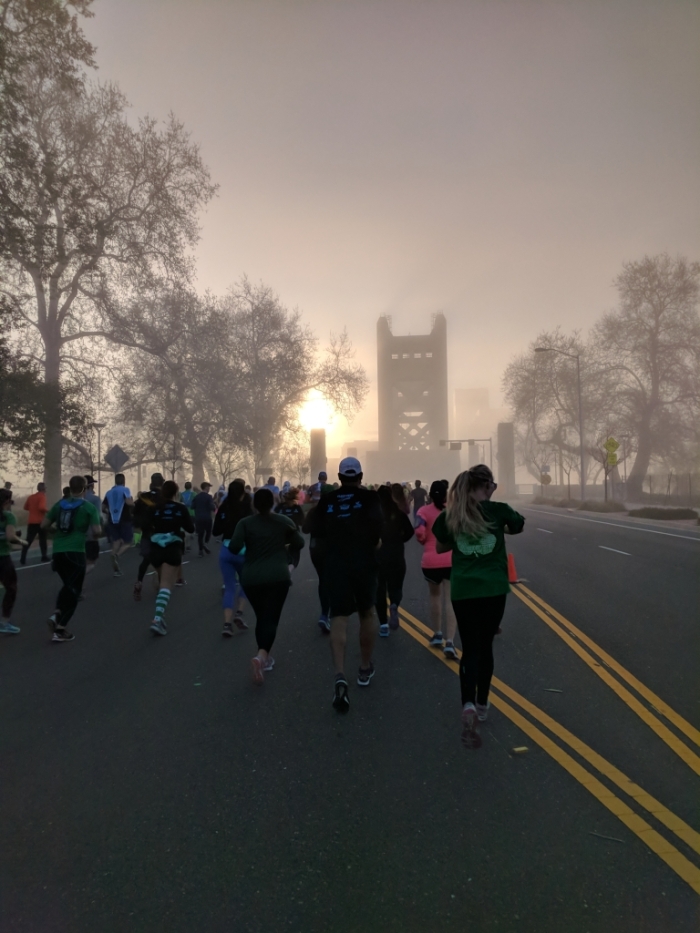 Old Town Sacramento is a touristy area where they’ve preserved the “old time west” feel and have a lot of kitschy little shops and restaurants.  Part of the roads are cobblestone and not flat.  A lot runners would swerve into the parking spots because they were asphalt.  I stayed the course and toughed it through the cobblestone.  The course was a little different from the one I had run 5 years ago.  Rather than coursing through the northern parts of Sacramento, we instead headed south.  A good chunk of the course overlaps with the Urban Cow half marathon (which I’ve done numerous times) so I was familiar with some of the terrain.  As mentioned before, a good chunk of the run was on fairly narrow trails so there were times where I was either swerving around people or just following people somewhat closely.  That’d probably be one of my gripes about the race.

My right knee had been feeling strange – some pain mostly when I would hyperextend the leg – the week before the race.  I wanted to just get through the race without injuring myself.  Surprisingly the knee felt good through much of the race.  I was debating doing a run-walk method as I’ve done in the past.  I ended up starting a run-walk method around mile 7, where I would walk for 1 minute after each mile completed.  I started off behind the 2:10 pace group and ended up passing them around the mile 5 mark.  They overtook me again by mile 9 and then I kind of followed them for the rest of race (usually within about 1/4 mile of them).  The 2nd of the race takes you all the way down to Land Park, which is a huge park in south Sacramento that has the zoo and some other cool sights.  This park is also the start/finish area for a good number of local races including Urban cow.  It was a little strange to run through the park and then back out of it since I was so used to finishing there.

Towards the latter half of the race, the sky came out and the fog cleared.  A few miles before the end of the race, you run by the Capitol and across the Tower Bridge again.

The last mile and a half is a bit deceiving because you cross the bridge (and Raley Field is immediately to the left – this is the finish line) but then have to hang a right and run along the river.  Then you come back to Raley Field and have to run around the parking lot before finally finishing on the field.  The finish line is near home plate.  It was fun to be able to run on the warning track/foul line area of Raley Field.

The other cruel thing they do is making you climb up the stairs to get out of the finisher’s chute.

Most races these days have free post-race beer and this was no exception.  This year they had Lagunitas brewing.  They also had 3 different beer options to choose from: IPA, Pilsner, and Ale.  I had the Pilsner since it was the lightest.   These were no joke pours as well and I didn’t end up finishing my beer.  I also picked up a burrito – bean and cheese.  It was still very hot even though I had walked around with it for a while before eating.

The title sponsor of the race is Blue Diamond Almonds, which is based in Sacramento, so they had tons of sample packs at the finish.  This was fun because I had no idea they had so many flavor options.

I almost forgot that I had stuff at gear check so had to walk around the entire field to get that and then back to my car (so probably walked an additional mile after the race).  I got some shots as I was walking back to the parking structure. 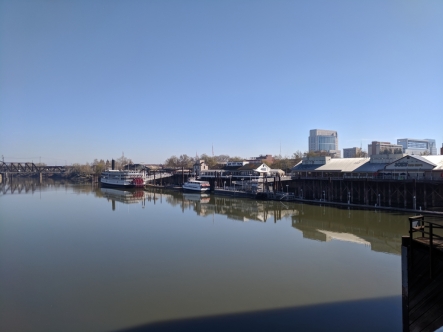 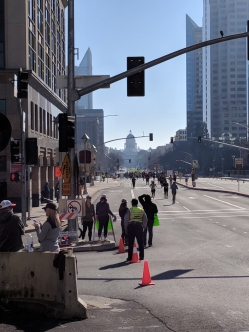 Overall it was a good  race and I’m glad to have done it again.  I’m registered for the Buzz Oates RunSac series, which has rewards if you do a certain number of miles per year in a certain number of races.  The lowest mile goal is 40 miles, which can be done if I do 2 half marathons and 2 10-mile races.  I will probably sign up for a few more races this year to do the series.

The run-walk method netted me a decent total time.  In my mind, I’ve had this 2:30:00 time as something I want to stay ahead of for as long as I can.  I’m not anywhere near missing out on that time but we shall see as I get older.