I thought I’d jot down a few things.

I again hit my 70 mile goal for the month, this time on the very last day of the month.  I only needed about 1.5 miles but ended up going 3 because I couldn’t just bring myself to run that short.  I managed to get out of the house early and was able to run in comfortable weather (mid to high 60s).  I am also happy that I’ve surpassed 500 miles for the year already.  So far so good on the running without injury (*knock on wood*).  Total miles in July: 71.56.  I’m a little apprehensive about August because I won’t have as many days to run since I’m working extra days to cover another person who has taken pretty much the entire month of August off of work.  It only means I am working an extra day per week but that is typically my long run day (Friday) so I’ll have to figure something else out.

I felt relatively efficient today.  Before lunch I had fit into my run, gone to a nice breakfast, did our grocery shopping, and weeded the front yard all before lunchtime.  The afternoon involved making bread and relaxing.

We had planted two different kind of heirloom tomatoes a few months ago.  I’m not good at tending to it and after setting up the drip system to auto-water it, I haven’t done much to it.  Slowly we have had tomatoes start to develop and only recently have they started to get some color and maybe we’ll be able to harvest them soon.  I was happy to see one of the tomatoes starting to turn from green to orange/red.

I decided to make a loaf of bread for our lunches this week.  The past several weeks I’ve been doing tortillas because it has been triple digit heat and I didn’t want to turn the oven on.  I haven’t been doing much baking or even pizza making because of the heat.  We had 8 straight days of 100+ F weather and 3 of consecutive over 105 F.  Luckily it cooled off a bit and only hit 95 F.

I mixed the above ingredients, let it auto-lyse for about an hour then did the slap & fold kneading for 15 minutes.  I let it proof for about an hour (it doubled) and did 2 stretch & folds (envelope folds) along with degassing.  Then I formed it and placed it in a well-greased (butter) loaf pan (9″ x 5″).  I let it rise for about an hour and then baked it at 425 F (using my water sprayer to mist the bread as it went into the oven.  After 10 minutes, I dropped the temperature to 375 F and misted again and baked for 27 more minutes.  I took the bread out of the pan and let it sit in the oven at 375 F for another 4 minutes then removed it and let it cool.  Overall looks good, haven’t tried it yet so can’t comment on its taste. 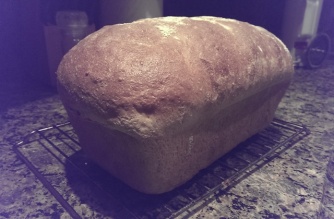 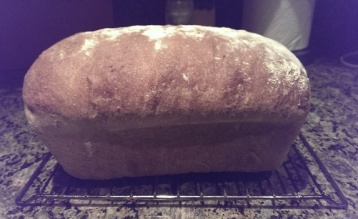 I am happy with how the crumb looks.  Tight enough that it will be able to hold the meat of the sandwiches.