I don’t know if I’ll ever get around to posting about making my own sourdough starter but this week’s bake involved using that homemade starter.  Using starter from the fridge does require a bit of advanced preparation as you need to “wake” your starter up and get it up to snuff to bake with.  On Thursday I pulled my sourdough starter out of the fridge (it had been in there for about a week).  I split it in half, fed one half and let the yeast eat for awhile (i.e. get some bubbles going) and then replaced that back in the fridge.  The other half I removed half of the starter and then fed it with 1/4 cup water and just under 1/2 cup of flour.  Previously I had been feeding the starter based on weights but decided for this week’s bake I would switch to using volume because it is much quicker using a measuring cup instead of getting the scale out.  I continued feeding the starter around every 12 hours for the next 3 days until I had an active bubbly starter.

Sunday morning I fed the starter one more time then waited about 4 hours (I read that is when the starter is most active).  I  haven’t used the sourdough starter by itself as the only source of yeast so was interested to see how this would turn out.  My recipe was as follows:

I deliberately kept this recipe simple as I wanted to see how much sourdough flavor I could get from the starter.  I mixed all of the above together into a wet mess, let it auto-lyse for 30 minutes and then did the slap and fold method for about 15 minutes.  This dough was placed in a clean bowl and allowed to bulk ferment for about 1-1.25 hours.  I was pleasantly surprised to see that the dough had increased by 1.5-2 x it original size.

I proceeded with 3 stretch and folds (envelope style) separated by around 30 minutes each.  I could feel the dough coming together nicely.  After the last stretch and fold, I bench rested the dough for 5 minutes, then shaped it creating a nicely tensioned surface.  I used a well floured towel in a collander and put the dough in there to proof for the final time.  Since I made pizza, the kitchen was warm and after about 40 minutes the dough had proofed to the proper amount.  Instead of using a pre-heated dutch oven I free baked the dough on my pizza stone (steel) using some parchment paper to do the transfer.  I misted the inside of the oven and baked the bread at 500 F for 10 minutes, then dropped it to 475 for another 10-15 minutes or so.  When I saw how much oven spring was present, I realized I hadn’t de-gassed the dough enough during my stretch and folds and forming.  Oops!  Oh well. 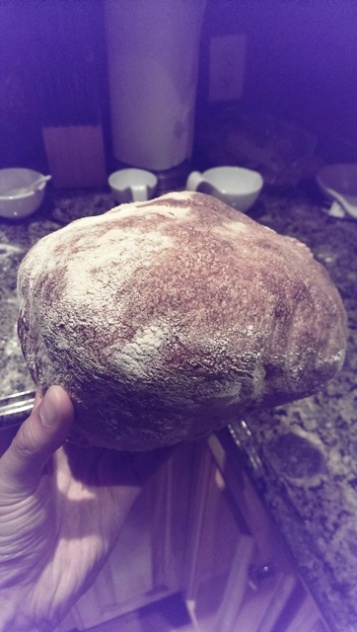 You can see the impossibly large air holes in the dough, which makes it hard to use as a sandwich.  The great thing about the bread was that it had that characteristic smell of a sourdough loaf.

Overall this bake was more to see how my sourdough starter would function.  I’m happy with the amount of yeast activity present in the starter and also that it does impart some flavor as well.  It’s quite amazing that this starter was created using just water and flour.  The natural bacteria and yeast from the flour and the environment create this living, breathing organism that can be used to bake bread.  Pretty neat!

Lessons for next time: de-gas the dough properly.