I discovered this great web site: Weekend Bakery that has some wonderful recipes and tips.  So I thought this week I’d try the above bread.

I started with a poolish:

I let the poolish sit at room temperature for 1 hour and then transferred it to the refrigerator for ~13 hours.  The poolish had more than doubled in size overnight.

I added the poolish to:

I used the 1/4 tsp because my scale doesn’t measure half gram increments so I looked up a conversion.  I know it isn’t exact but neither is baking.  One thing I will need to slowly learn is how to make adjustments to the dough due to weather.  The time of year, temperature, humidity all affect a recipe.  I let the dough rest for 10 minutes covered. 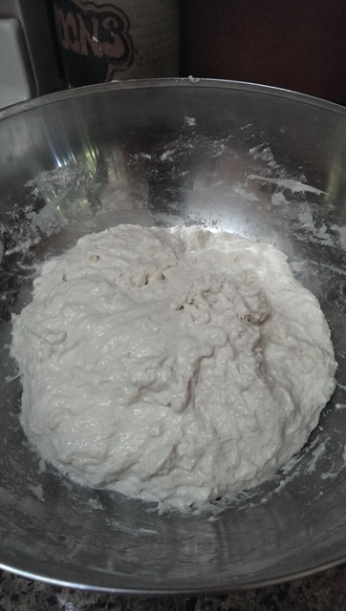 I dumped the dough out onto a floured surface and performed a stretch and fold (envelope style – pulled and stretched dough from east side and folded it 1/3 of way over to west side, pulled from west to east, then north to south and south to north).  I continued repeating this process for 2 minutes then put the dough into a lightly oiled bowl for 45 minutes.

I repeated the stretch and fold (2 times instead of for 2 minutes) and could tell the dough was really coming together already.

Then I bench rested the dough for 10 minutes.

I divided the dough into 2 and shaped it (following the technique of folding the dough over, sealing the seams and then doing a tension pull).  There were a large amounts of gas bubbles in the dough and I know that this isn’t good for bread so I ended up popping the large bubbles as best I could.  Since I have not yet invested in bannetons, I lined some bowls with lint-free floured cloths.  I decided to try 2 different methods of baking — with dutch oven and on a pizza stone.  Since I couldn’t bake them side by side, I put one of the boules into a fridge.  While I was doing all this bread prepping, I also had to replace a PVC line running to the raised vegetable gardens.  This required me to take a few trips to home depot (since of course you can’t just go once).  The problem was that I started the pre-heat later than i would have liked for the proper proofing.  The oven was preheated at 455 F wtih the dutch oven.  I lucked out and the proofing was just about right for the bread to go in.  I don’t have a super sharp knife so when I went to score it, I messed up the top of the boule a little.

I baked the 1st boule for 10 minutes in the covered dutch oven, then removed the lid and baked for another 35 minutes (internal temp around 200 F at the end).

About 15 minutes prior to the first boule finishing, I removed the other boule from the fridge.  I placed this one on a semolina lined pizza peel and slid it onto my baking steel .  I previously had used a pizza stone but it broke within the first few uses so I figured I’d try something a bit more hardier.  And it has produced some wonderful pizzas on it.  This second boule I baked at 455 F for 45 minutes.

The second boule had a much better oven spring compared to the first.  The first boule kind of spread out more.  The one other difference between the two is that I proofed the first boule with the seam side up and the second boule with the seam side down.  So I’m not sure if the better oven spring was due to how I handled the boules or if it was the cooking methods – in a dutch oven or on a pizza stone.

The wife said the crumb looked like professional bread. 🙂

After cutting into the 2nd boule I realized why it was so tall.  I didn’t de-gas it enough and the air holes were giant.

Definitely need to make sure I de-gas and form it better.

Now to figure out what to do with all this bread!