Back in December my wife had a work conference in New Orleans.  She had previously visited for work and had a great time.  I had never been so figured this would be a fun little trip for us.  I flew down a few days after she did and arrived in the late afternoon after making a connecting flight through Salt Lake City. 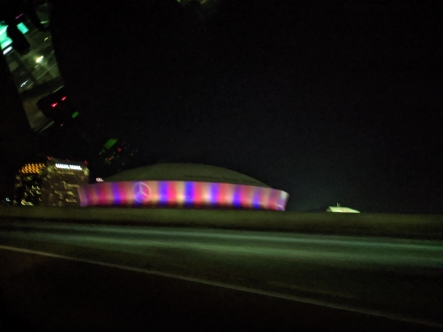 I caught a cab into the French Quarter to our hotel, Hyatt Centric French Quarter.  After getting squared away in the hotel room, we met up with my wife’s coworker for some drinks and grub 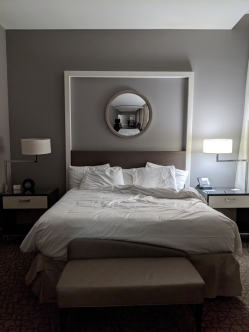 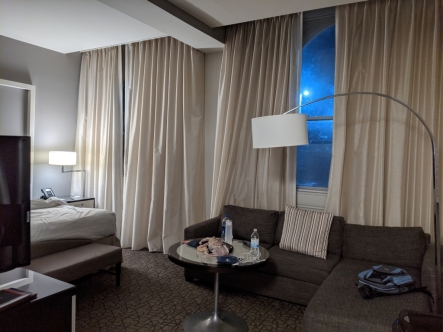 Prior to getting some food we decided to hit up the Carousel Bar, located in the Hotel Monteleone.  This bar is famous because the bartop is a circle and rotates around the actual bar.

We were lucky enough to get a few seats at the bar and experience the joy of a rotating bar – one rotation takes 15 minutes.  They also provided some complimentary nice salty snacks to get you to order more drinks.  We were getting hungry so ventured out and opted to try the Acme Oyster House. 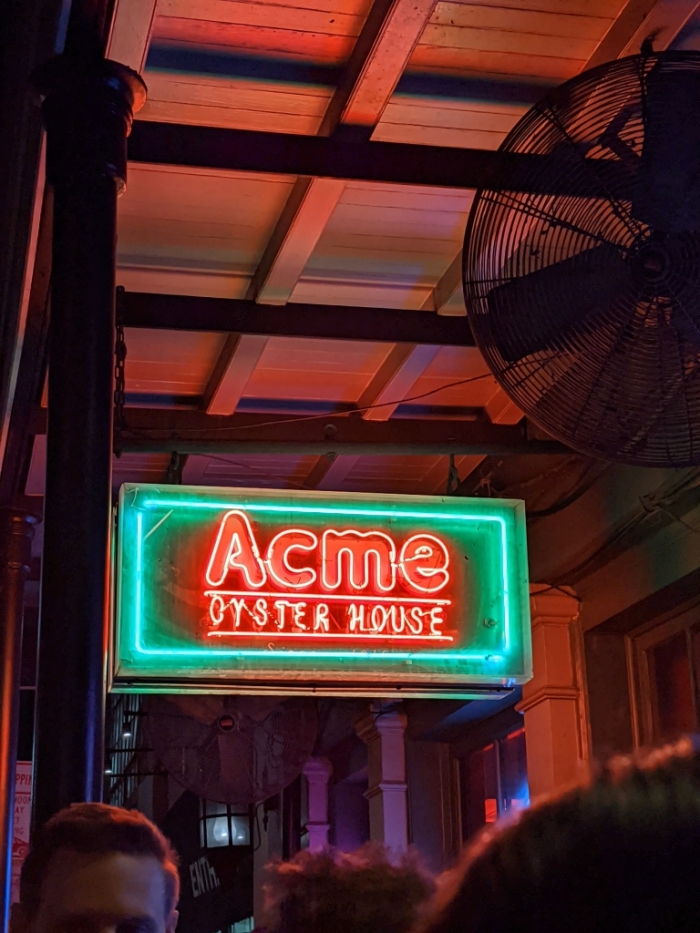 I decided to start my visit off right and ordered fried aligator bites, a combo of shrimp po boy and gumbo, and some raw oysters.  All of it was washed own with a hurricane.  Everything was quite tasty. 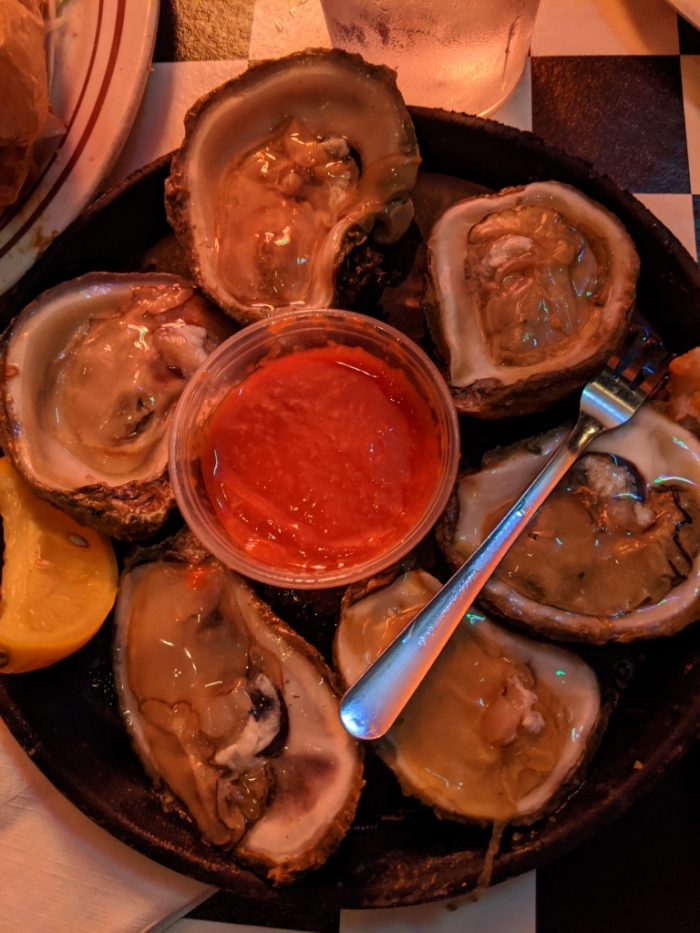 D and I continued to walk around and went down Bourbon street.  We stopped at Beignet cafe and picked up some Beignets for dessert back at the hotel room along with some of their coffee.

The next day I had the morning to myself as D finished up her conference.  I went to the hotel’s gym to try to get some sweat in.  Unfortunately I didn’t back the right shoes so got some strength training in but then decided I’d head out to look for some grub.  I headed toward the Mississippi river and found myself at Woldenberg Park.  This was a nice little waterfront area where people could walk, run, or just chill.  There was what you’d think of as an iconic river Paddle Steamer boat. 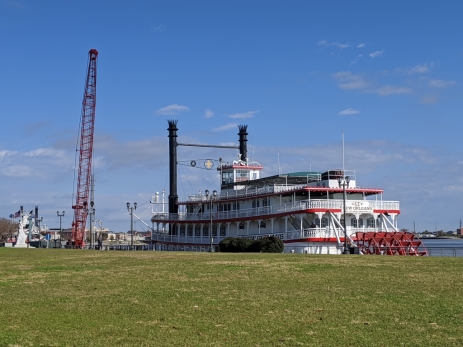 I then walked over to Jackson Square.

One of the restaurants I had looked into was the Stanley of New Orleans.  I ended up having the namesake breakfast called the Eggs Stanley, which consisted of cornmeal-crusted oysters with eggs benedict. 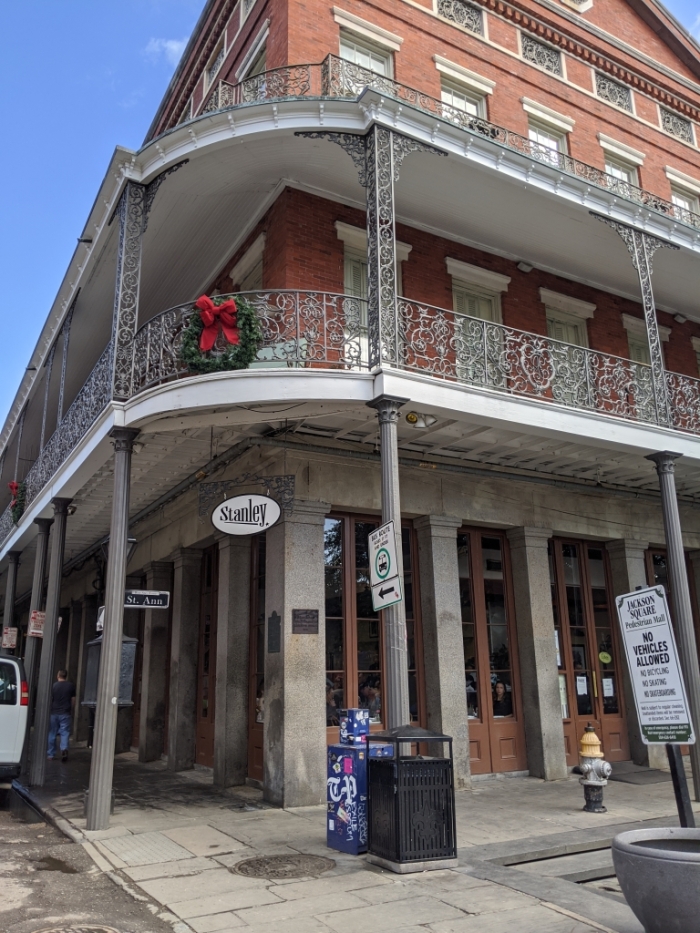 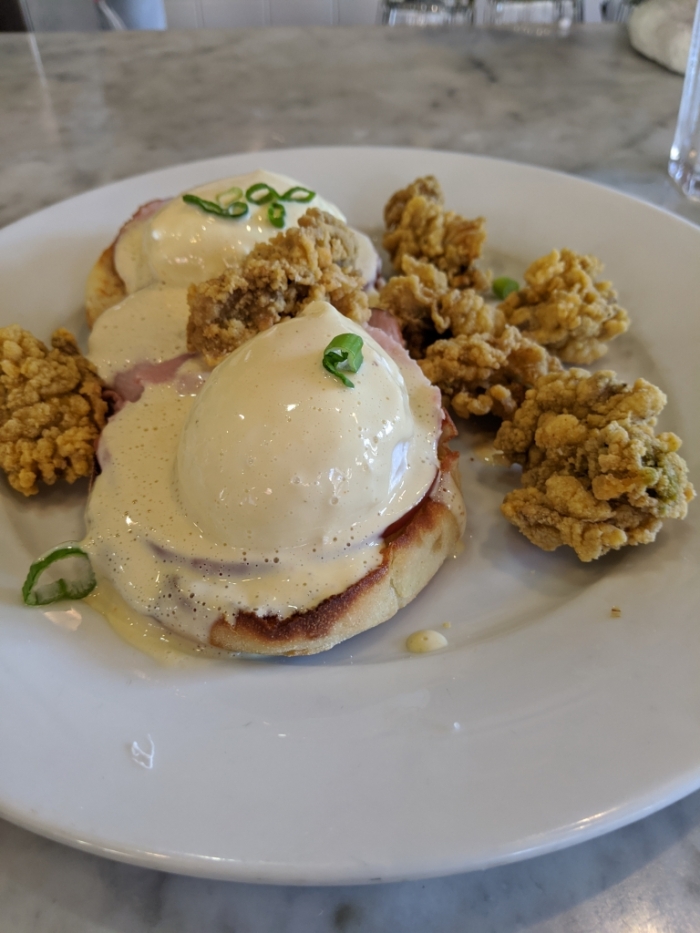 I wandered through the Bourbon Street area in the daylight.  It’s amazing how different it is.  The narrow streets were filled with large box trucks making their deliveries to provide the sustenance for the nighttime revelers. 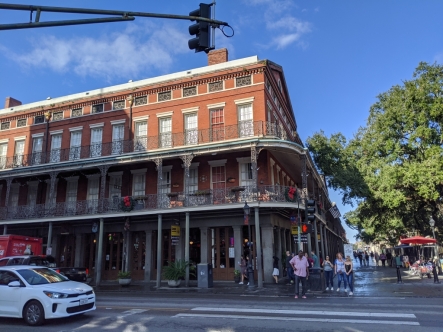 With the conference over, we decided to check out probably the most exciting place for me, Willie Mae’s Scotch House.  This one time bar turned restaurant is famous for their fried chicken (I do love me a good fried chicken).  I will definitely say that it was a very very tasty bird. 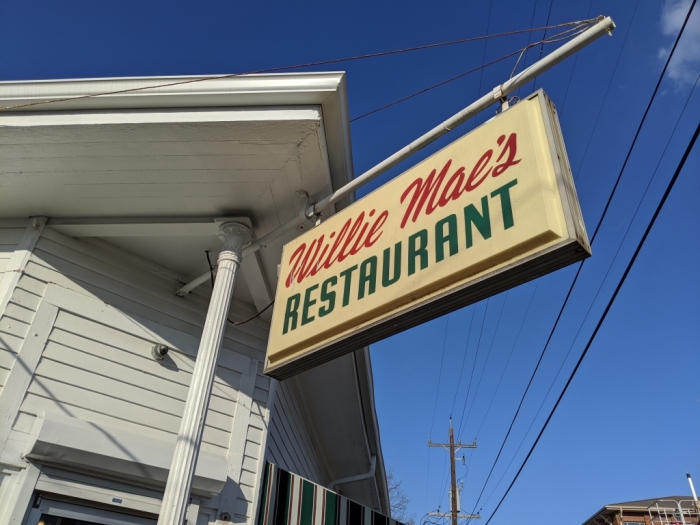 Not knowing what we were going to do the remainder of the afternoon, we elected to Lyft up to City Park and check out the New Orleans Museum of Art.

We had elected to change hotels (due to D getting reimbursed for her conference) and found our way over to the Q & C Hotel.  The registration desk and bar area were actually in a separate building from the rooms, which was a first for me.  First impression was the hotel appeared more “hip” (do people still use that word?) and targeted to a younger crowd.  The building with the rooms had a downstairs lounge area with various seating areas, a shuffleboard table, and some TVs. 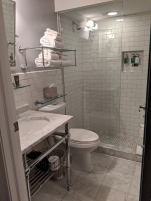 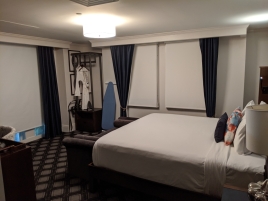 Luckily our lunch was a bit later in the afternoon so we weren’t too hungry but went to check out a chic little bar called Bar Marilou.  It was kind of tucked away in this little alley but had a cute walkway leading up to the bar.  Along with the cocktails we split some food: GOUGÈRES AUX ÉPOISSES and the Bar Burger.  Honestly can’t remember the cocktails we had there but I do remember they were funky and not necessarily the best.

The next stop was Piscobar at Selina Catahoula.  D is a huge fan of pisco (I am too) so we thought we’d see if they had good drinks.  This was a small bar on the ground floor of the hotel.  We luckily found some seats at the end of the bar and ordered up some drinks as well as some food.  They had just changed over their bar and food menu (to vegetarian asian fare).  Because of this change service was slow and I saw them looking at their cheat sheet for making the drinks.  I didn’t get any pics of this place.

We woke up and were thinking about going to the Garden District before our lunch reservation at Compère Lapin.  However we didn’t have a fast and easy breakfast spot picked out.  On the fly we made the decision to try Willa Jean – a modern Southern restaurant/bakery/coffeeshop.  I had to get the Pimento cheese appetizer (country ham + crackles + pickles) and then the crispy boudin + collards + mustard on a biscuit (pictured). 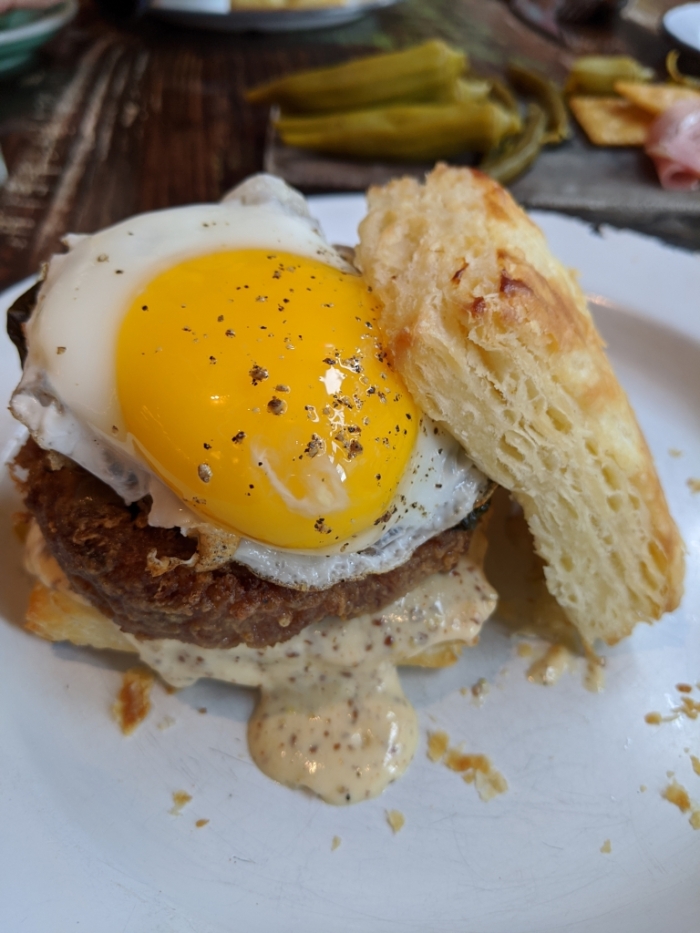 We had a little bit of time before lunch and nearby was the Audobon Butterfly Garden and Insectarium, housed in the US Customs House – so we had to go through metal detectors.  I enjoyed it and would have spent more time there but we had lunch reservations.

Compère Lapin is Nina Compton’s restaurant, who was a contestant on Top Chef and a James Beard award winner.  The dining room was a little steampunk decor.  They had this cool restaurant-wide pully system that ran their ceiling fans.  I was excited for the food (as well as the drinks).  D and I shared the Hamachi in an everything bagel.  Nice amuse bouche starter.

My main was the Goat Bolognese with Cavatelli and Ricotta.  So decadent and rich and delicious.

As we were about to make our way to the Garden District, we found out the Streetcars weren’t running because there was a holiday parade that was doing to happen.  People were lining up and down the streets and we kept making our way west to where the start of the parade was.  We figured since parades are such a big part of the culture that we’d hang out and watch.  Boy we were in for a show.  They had such a wide range of groups in the parade from tricked out jeeps to floats tossing beads/candy, various dance groups of both young kids and older women with various themes.  It was a fun time and entertaining.

Since there weren’t any streetcars running and we didn’t feel like taking a Lyft, we elected to walk.  Luckily it was actually overcast and cool so the walk wasn’t too bad.  The mansions that we saw were quite impressive and unique.  Every house had their own little style that made it different from the others.  We also passed by Commander’s Palace and one of their big cemetaries (unfortunately it was closed so we couldn’t walk through).

Before heading to dinner on our final night we wanted to check off a few more bars that we were interested in.  Our first stop was the Sazerac Bar, located in the Roosevelt Hotel.  This place was packed but we managed to belly up to the bar and get our orders in.  Of course I had to have a Sazerac and D had a Corpse Reviver #2. 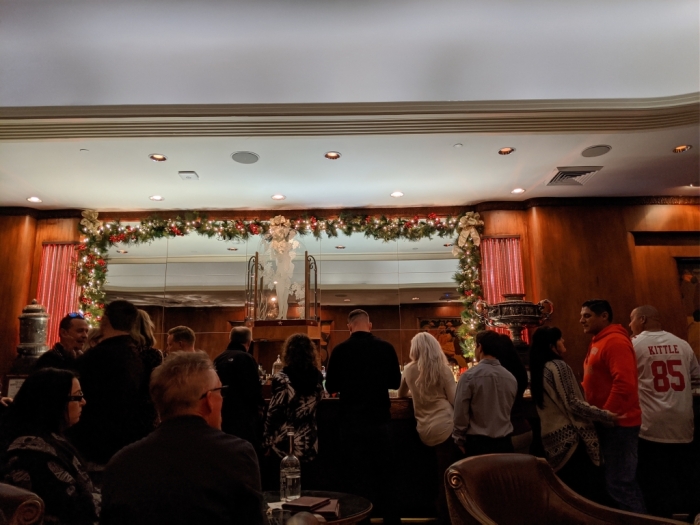 Next up was the French 75 Bar by Arnaud’s.  This was D’s favorite bar.  We each had 2 cocktails and were feeling good on our way to dinner at Antoine’s.

Honestly I wasn’t overly impressed with dinner even though it is a New Orleans’ classic.  Their Oysters Rockefeller was kind of heavy and not that great.  The fish was okay but nothing to write home about.

We made our way to Pat O’Brien’s and their dueling pianos and Hurricanes.  Of course we had to partake in a Hurricane.  It was a rousing good time. 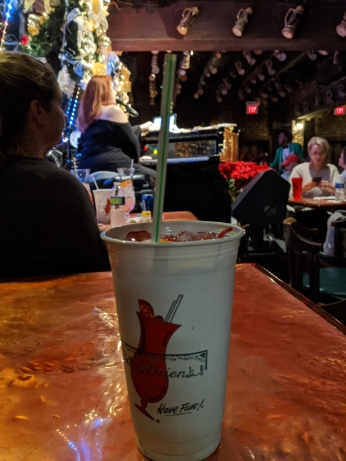 Right next door is Preservation Hall but the line was too long for us to wait.  Our final stop of our trip was at Cafe Du Monde near Jackson Square.  They also had a long line but it wasn’t too bad. 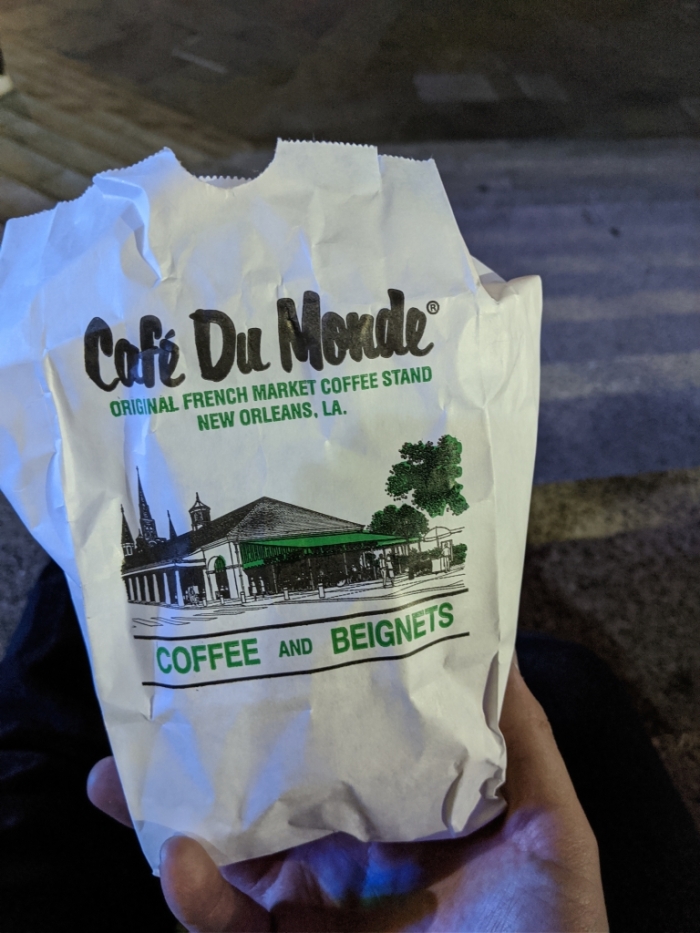 And just like that the whirlwind trip was over.  I did not have a hangover the following day, which apparently is attributed to the magic of beignets.

‘Til next time NOLA!