Two weekends ago for the Cesar Chavez holiday, we took road trip over to the coast, north of SF.  We hadn’t been to the Bodega Bay before and thought it’d be fun.  We found a nice quiet Air BnB that allows dogs.  Since check in wasn’t until 3 pm, we woke up on Friday and did our normal thing and packed and finally left the house after lunchtime.  It was a relatively short drive that took us past Napa and Sonoma and through Petaluma up into Sebastopol, a small town about 7 miles west of Santa Rosa.  Our Air BnB was actually located a few more miles west of this area up in a little hill/mountain area.  I really liked that there was a grove of Redwoods right outside the getaway. 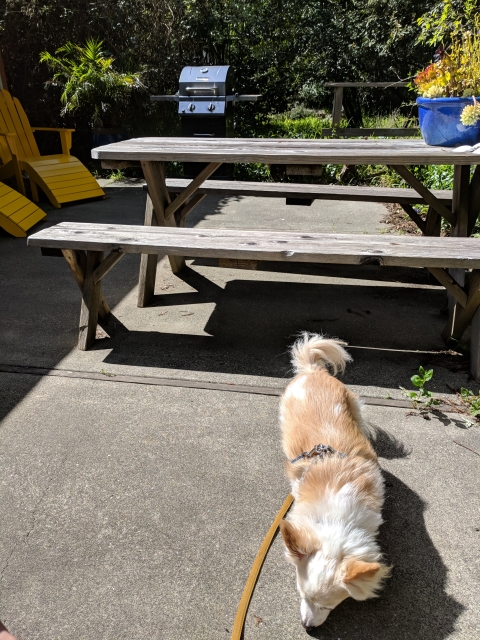 After getting settled in, we took the dog with us to one of the dog-friendly beaches, Doran Beach.  This was basically a small finger-like projection from the land and was the southern border of Bodega Bay.  When we arrived, it was low tide in Bodega and it looked more marsh-like than an actual bay.  Later on when we drove by it another day, it looked more like a bay and ocean so it was cool to see the two different levels.  Along this litter sliver of land were a bunch of people camping right by the beach and water.  The last time I camped was in MI where you drive up to the camp area and set up a tent.  Most people on this beach area had trailers or campers but also had some tents set up.  Reminded me of a different life I had.

The dog seemed to enjoy the beach though she gets tired really easily.  I ended up carrying her about 1/4 mile back to the car after we did our exploring. 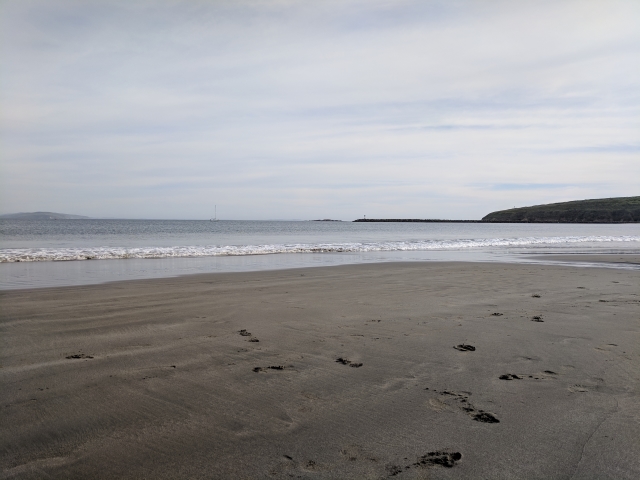 We dropped the dog off at the Air Bnb and headed over to nearby Sebastopol to check out this hip new area called The Barlow.  Sometimes I am not very good at being decisive on where we should eat and The Barlow offered us a few different food options.  We settled on Vignette Pizzeria, a place for Neapolitan pizza.  I felt the pizza dough was a little too soft and soggy for me.  The center part of the pizza was extremely soft.  I noticed also that the crust was not fully cooked through.  I suspect it has to do with their really hot oven not allowing the inside to fully cook before the outside starts to char.  I will say though that the flavors were good.  Afterwards we had a beer at the Crooked Goat Brewing Company.

I had the Silver Lining (Vanilla Bean Stout) and it was pretty good.  The rest of the Barlow is comprised of multiple buildings with boutique shops, coffee shops, etc.  We also walked by an ice cream place that was making their own liquid nitrogen coffee.  The air around that whole area smelled like sugar.

The next day I made the trek over to Tomales to the Tomales Bakery and picked up a croissant, ham/cheese croissant, and their morning bun.

Overall it was tasty and then it was time to head out to the Armstrong Redwoods Natural Reserve, about a 40 minute drive north from where we were staying.  I’ve always enjoyed walking in the woods and growin up my family used to take many trips to various National and State parks all over the country.  It was already busy by the time we arrived and had to park on the road just outside the entrance area.  The forest bathing was a nice relaxing walk. 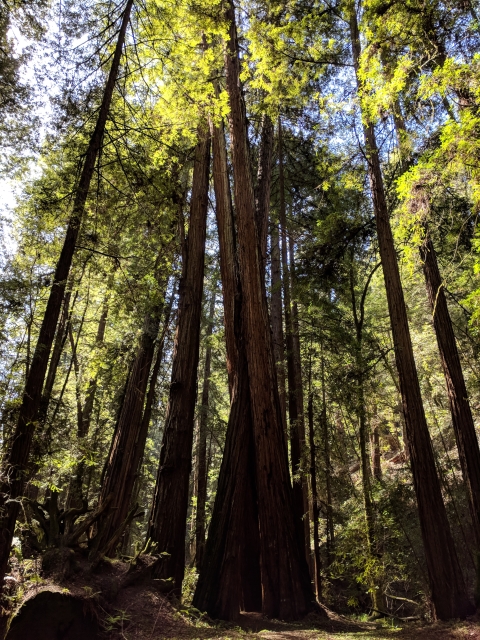 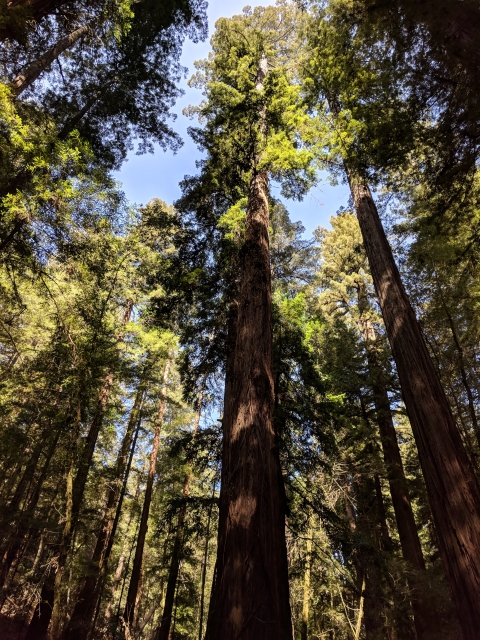 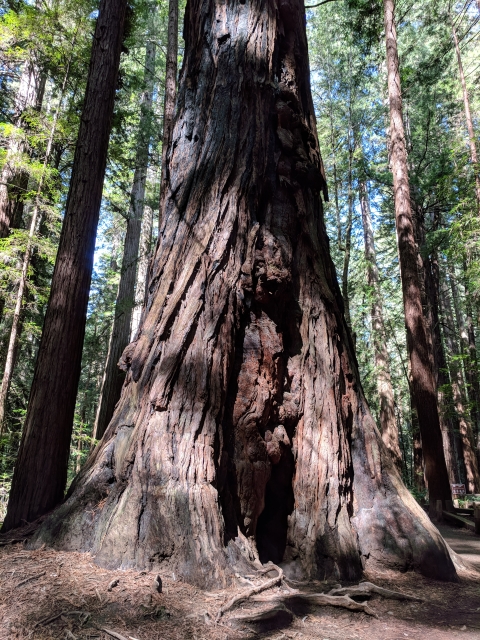 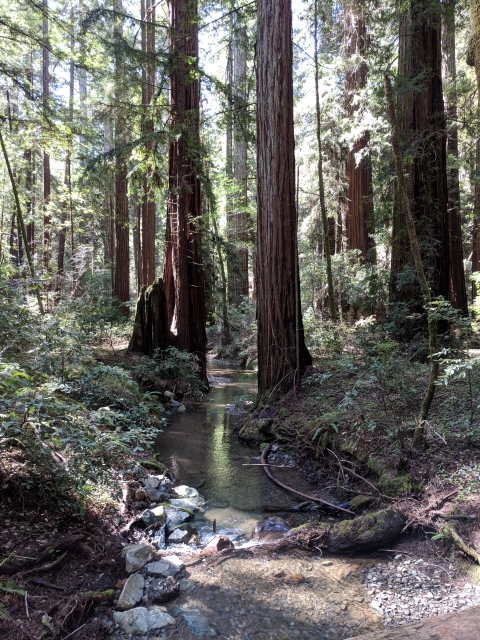 Redwoods are so amazing with just how tall they are.

We stopped in Guernville (just south of the park) for some lunch at Boon Eat + Drink.  I didn’t expect to find a refined little eatery in this town because the exterior and street look like typical small towns in rural areas.  I had a decently upscale meatball pesto sandwich and a refreshing beer. 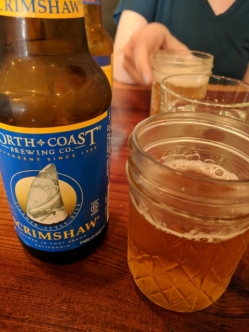 Our next stop was to Sonoma Coast State Park where the Russian River dumps into the Pacific Ocean.  I just love seeing the vastness of the ocean and watching the motion of the waves.  Something just so calming about it.  I used to go home from school on vacations and go to the beach just to watch the waves crash onto the beach.

From  the Sonoma Coast park we drove south along Hwy 1 back to Bodega and to our Air Bnb.

We just hung out amongst the little redwoods at our cottage for the rest of the afternoon.  The weather was just gorgeous.

Prior to dinner we were going to do a short nature walk at the Laguna Wetlands Preserve but cut it short since it seemed like it was going to be a bit of a walk.  I did find some neat trees though. 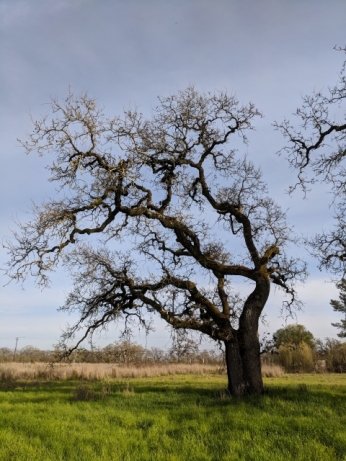 Dinner was at the Gravenstein Grill and was quite tasty.  They had all day happy hour on Saturdays and we ate in the bar area.  I had a 1/2 dozen raw oysters on the half shell and we split some tasty fish tacos and a cheese plate.  We ended the night at Screamin’ Mimi’s Ice Cream.  It had to be good since there was a line out the door.  Who knew they were the #4 best ice cream in the US.  Overall I thought it was quite tasty.

The next morning we got up and got ready to head back to Sac.  On our way out, we stopped at Wild Flour Bread to pick up breakfast and maybe a few extra items.  The wife went with a sweet type scone and I picked up a bacon and chive scone.  We also bought one of their Wheat sourdough boules and a potato, garlic, rosemary, jack cheddar and swiss Fougasse.  The scones were huge and mine had large pieces of bacon throughout.  The bread made for some good eating for lunches for the work week.

In the end, it was a nice relaxing weekend away.  Our Air BnB host was also very nice and stayed out of our way.