On today’s run, I went to check out a  new neighborhood, McKinley Village, that is being constructed just outside of the midtown/downtown Sacramento area.  Many in the East Sacramento neighborhood were very resistant to the introduction of a new houses because they were concerned of the increase in traffic and congestion.  The location of the site is interesting because it sits between a freeway and some raised train tracks.  They actually had to create a tunnel under the train tracks for a road in and out of the neighborhood (as below).

That means there’s only one way in and out.  Eventually I believe they are supposed to create another ingress/egress from another part of the neighborhood.  I guess within the “Village” there is supposed to be like 5 different sections.  So far they only have model homes built and sales offices open.  You’ll see from the pictures below that the designs of the homes vary greatly.  With the space being so open right now, it looks a bit strange having a contemporary condo next to a more traditional looking home.

Another unique feature of the neighorhood is that there is supposed to be an art walk within a park area.  So far they have a few pieces up already next to what looks like a bocce ball court.

There is also a clubhouse and I guess a community pool.  As you can see, there’s a ton of sitting water as it has continued to rain a good amount the last few days.

Beyond the wall is the Business 80 freeway.  I will say that the sound barrier is not that bad but you can definitely hear the hum of the cars going by.

One huge negative (at least in my own eyes) are that a lot of the houses actually sit in front and behind each other – like those apartment parking spaces where it is one long space and you can park two cars but need to move the outer one to get the inner one out.  I can’t imagine having a house so close to another home and also having absolutely no yard whatsoever, but to each his/her own.

And finally, a silly dog: 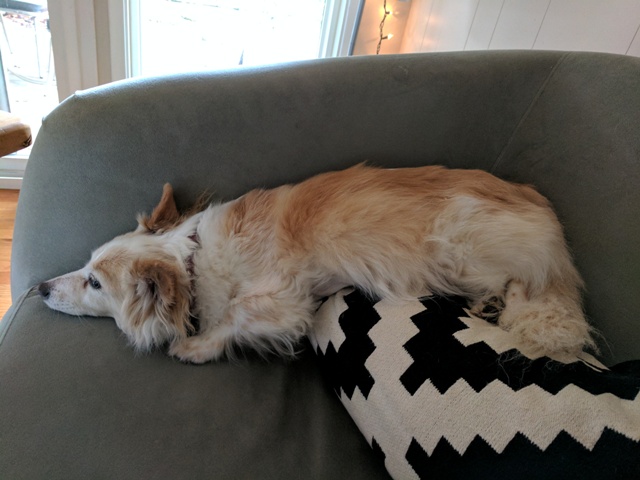