This past Veterans Day, the wife and I were both off work so I suggested we head over to the Napa Valley for some lunch.  It seemed like we had been getting over to Napa a bunch of times in the last year but haven’t been in a while.  I figured it was time to have a nice meal at one of the many awesome dining establishments.  Initially I was going to make reservations for Bouchon, a Thomas Keller restaurant, but it seemed a bit heavy for lunch.  I had heard good things about Mustards Grill in Yountville.  This is one of Cindy Pawlcyn’s places and she has another restaurant in St. Helena (also in the Napa Valley) and then one more in Monterey.

Their only reservations for Veterans Day for lunch were for either 11:45 am or 2 pm.  So we elected for the 11:45 am one.  I anticipated that there would be some traffic on the 80 since Friday typically has some traffic and allotted about an hour and forty-five minutes to get there.  We left a few minutes late and in fact hit some traffic, though some of it was related to actual minor fender benders.  I could see that we’d be late for our reservation and luckily the restaurant was happy to push our reservation back to noon.  Upon arrival we were seated quickly in the corner of the quant restaurant.  This is located directly off the main highway that leads from Napa to Yountville all the way up to Calistoga.  Outside the restaurant they have some small gardens that provide some of the produce they use in their cooking. 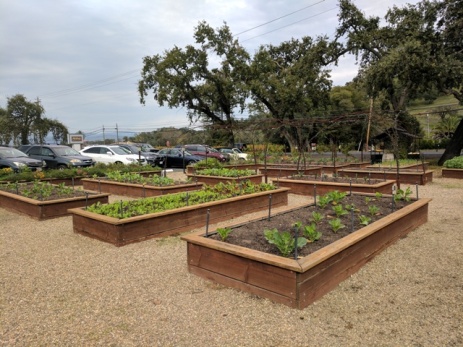 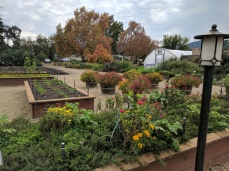 I enjoyed that the entire front facade of the restaurant was comprised of windows, allowing for a lot of natural light, especially with our corner table.  The waiter promptly came over and went over the specials and took our drink order.  I tried a cocktail that was comprised of vodka with apple cider and something else and was quite refreshing.

The wife elected to have the daily soup (Coconut curry butternut squash soup with chili oil) to start and I went with their house made potato chips and dipping sauce.  I enjoyed the chips as they were sliced thinly and fried to a nice crunch.  For our mains we both went with specials they had for that day.  My wife had the Mahi Mahi Tostada with cabbage, beans and cheese and I went with their lamb burger and fries.  The lamb was freshly ground that morning.  I ordered it medium rare and my only complaint is that it came out medium to medium-well.  Otherwise the taste of the burger was delicious and not too gamey.  We finished off the meal with the chocolate hazelnut tarte and espresso ice cream (not pictured), which even the table next to us was like “that looks SOOO good,” and it was.

After stuffing ourselves silly, we realized we needed to get some activity in to burn off some of the many calories we just had.  So we went over to downtown Yountville (Mustards Grill is a few miles north of the downtown area) and walked around for awhile.  There was this cool little statue of a fireman and I thought the back of the statue had cooler details than the front. 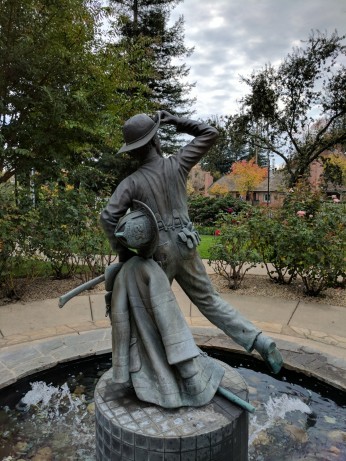 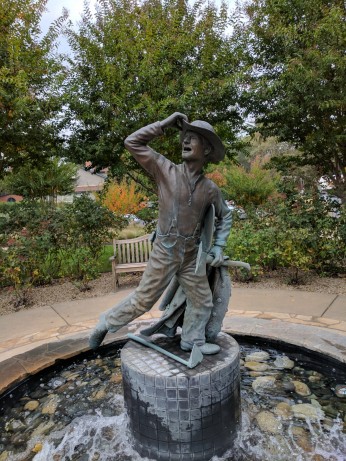 They have an Artwalk – with various art installations along the sidewalks (apparently they are also available for acquisition if you have that kind of dough).

We also walked over to the French Laundry, which is on my bucket list.

A bunch of my relatives have already been but I have yet to partake…one day.  Across from the restaurant is their garden where they grow a lot of the produce they use.  They even have a small chicken coop. 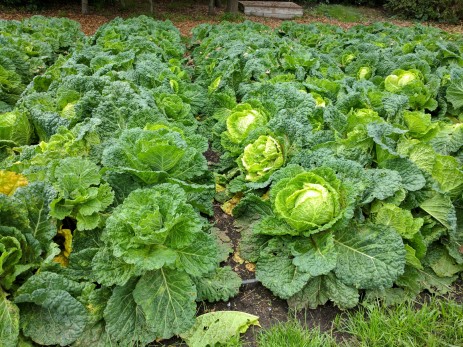 After we walked through the small quaint neighborhood back to where I parked the car we made our way back to Sacramento.  It was the afternoon on a Friday by this time and the drive back was slow going.  Upon arrival back in town, we stopped at Sears to pick up my new glasses (they had a BOGO deal the day we happened to go look at glasses).  Now I’ve got 3 pairs – one of which will be my running glasses I’m sure.  Overall was a fun holiday day.