The wife and I took off to PDX the weekend prior to the 4th.  We visited this great town 4 years ago.  Similar to last time, we decided to stay in the city center.  The difference this time was that I elected not to rent a car.  My wife had done some research and found that the city’s public transit system (TriMet) would be a convenient and cost-effective way of traveling around Portland.  I looked up the cost of daily parking (valet only) at our hotel and added it up with the cost of renting a car and realized it was a significant investment.  Since I grew up in CA and love having a car and driving, it took a little bit of convincing myself but I realized she was right (as usual).  TriMet is in charge of their local train system, streetcars and buses.

We arrived at PDX around lunchtime on the Thursday before July 4th.  My wife pointed out that the design on the carpeting at the airport is famous so I decided to take a picture of it with our shoes.  You can even buy drink coasters with that design on it.

The nice thing about TriMet is that you can buy a day pass (only $5/person) and take any of the previously mentioned forms of transportation.  The other nice thing is that there is a train stop at PDX airport that will take you to the city center in 45 minutes (with no worries about traffic, which we did see on our way into the city center).  We arrived at the City Center and luckily our hotel was steps away from the train stop.  We stayed at The Nines, a Luxury Collection hotel with SPG.  For our wedding in San Diego, we stayed at The US Grant, which is another hotel in the Luxury Collection.  I gotta say it was a nice hotel and great location for our needs. 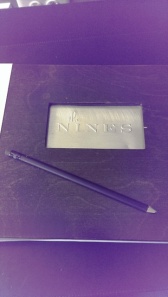 Luckily our room was ready early and we were able to drop off our bags, use the facilities and then head back out for a day of exploring.  Since it was already past lunchtime and we hadn’t eaten yet, we checked out one of the area food cart blocks (example here).  We literally walked around the entire block looking at each food cart and their menu.  There was a preponderance of middle eastern food (lots of kabobs, schwarmas) along with Thai food.  So after we had made it around the block once, we started going back in reverse to actually order something.  One smart vendor was asking people if they wanted a sample of the chicken.  I said “sure” and after tasting it and enjoying it I ordered a chicken schwarma wrap.  Before I even had a chance to pay, they had made one and handed it to me.  This was my first indication that people in Portland are nice and trusting because I could have just walked away with the food.  The chicken wrap had some spices in it that gave me an indication it was not your typical greek fair, but probably more in the Persian persuasion.  After paying, my wife wanted to try a different place and we found her a chicken gyro.  Hers was more the classical type.  We wandered into one of the many little parks in the city and sat on the concrete planter.  There were tons of other people sitting, some eating, some reading, and a group that was playing some sort of city scavenger hunt.

We didn’t have a strict itinerary for this trip but had a list of things we wanted to do and places to eat/drink so after finishing, we started to check stuff off the list.  We wandered into the Pearl District and our first stop was Powell’s Bookstore.  I didn’t realize how extremely large this store was.  It reminded me more of a library because there were also a lot of people loitering around reading books and such.  I liked that the store was organized into specific topics and we perused the various offerings.  Of course we had to stop in the cooking/eating/drinking section.

My wife, who is a huge fan of reading and books, bought me some Library Card socks. We also purchased a Zinester’s guide to Portland for our friend KP who is shortly moving to Portland.  My wife schooled me on the term Zinester.

With Powell’s checked off the list, we next headed further into the Pearl and to the Rogue Distillery and Public House.  We’ve always been a fan of Rogue so stopped in for some brews.  They had a fairly extensive list of their beers along with their spirits (I knew they did dairy products like ice cream and cheese but didn’t realize they also distilled liquor).  Even though we had just eaten, I wanted something to snack on and the wife indulged me and we ordered their charcuterie platter with cheese.  The charcuterie was from Olympia Provisions (known for their cured meats).  Because Olympia Provisions is located a good distance outside the city center area I doubted we would be visiting the actual location because we were car-less.  This was a compromise to try their offerings.  So we ordered each ordered the beer sampler (since we have different tastes in beer) and shared the charcuterie platter.

Apparently they have partnered with Chef Morimoto to create some beers with him, which I thought was interesting.  So now that we were truly and fully stuffed, we made our way back to the hotel on foot.  After taking a nap and chilling, we decided to head over to Division street (Southeast neighborhood).  This street houses a ton of hot restaurants.  We landed at Nuestra Cocina.  They were definitely hopping and we grabbed a seat at the bar while waiting for the table.  Of course we had to order some margaritas.  I ordered their house margarita, which at first kinda shocked me but the more I had, the more I enjoyed it.  It was extremely simple with tequila and fresh lemon and lime juice.  I liked the simplicity of it.  My wife had the Margarita De Granada (Ginger infused silver tequila, pomegranate & lime), which was all right.  I enjoyed that their food was old peasant style Mexican cooking.

Everything was very tasty and I liked that the Chile Relleno was not battered and fried.  This was just enough food since we had already had two lunches within a short amount of time prior to this.  After dinner we hopped back on the bus back to the hotel.  I saw another generous act as the bus driver let a homeless person ride for free so he could get back to the city center (this was repeated in other bus rides).

After arriving back in the city center we weren’t ready to call it a night so headed out to check off more from our list of food/drinking establishments.  We walked back towards the Pearl and hit up Clyde Common.  We luckily managed to snag 2 chairs at the bar and to  our surprise the barman tending us was none other than Jeffrey Morgenthaler, a well-known bartender.  We watch the show “Best Bars in America” on Esquire and saw Jeffrey as the hosts visited Clyde Common.  I had the Cabin Fever and the Bourbon Renewal, while the wife had the Sound + Vision.  These drinks were quite tasty.  In the basement of this place was also a speakeasy called Pépé le Moko.  We weren’t sure if we’d be able to get in but stopped at their hostess station around the corner from Clyde Common.  The host took our name and said she’d have a seat about 20 minutes from when we showed up.  We took this opportunity to walk around the neighborhood and see what it was like at night (~10:30 pm).  Eventually we were texted and made our way back and into this tiny basement space.  It was dimly lit and a bit of a tight squeeze.

By this time I was needing a little snack since we had been drinking.  I ordered some Spicy Shrimp Chips and they had some complimentary corn nut type treats.  My wife ordered a Blue Hawaii and I had an espresso martini.  I have to say the espresso martini was probably one of my favorite drinks of the whole trip.  The spicy shrimp chips were definitely spicy and I didn’t expect myself to have trouble eating them but they definitely caused a burn in my mouth.  To help quench that burn, we decided to share the Grasshopper, which also was amazingly delicious. This cocktail is made with ice cream and is like a shake with booze.  It also has an awesome green color (no pictures of cocktails since my phone doesn’t do low-light pictures at all).

Finally we called it a night and made our way back to the hotel and rolled into bed around midnight.

It was an epic day 1 in Portland for sure.  The rest of the trip was fun but not as action packed so I will probably wrap up the trip in a 2nd post.